Not Even a Pandemic Can Push Rice Off Course 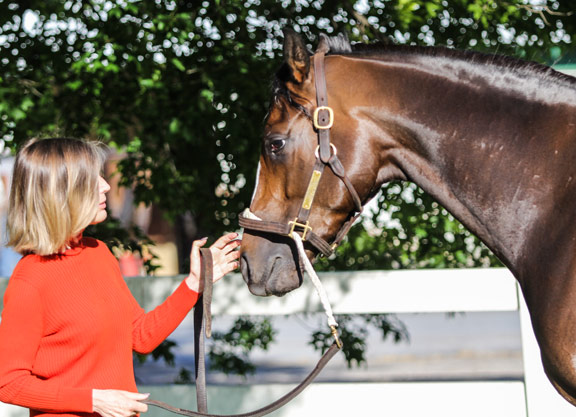 ELMONT, N.Y.–Linda Rice is as meticulous as they come in preparing her horses. The conditioner knows every detail about each and every horse in her care and maps out very specific plans for them. But, as organized as Rice is, she is equally as adaptable, as every horse trainer must be, and those qualities have served her well as she prepares Max Player (Honor Code) for a step up to the big leagues in an unconventional edition of the GI Belmont S. Saturday.

Max Player’s unique journey to the top started early on when he failed to meet his reserve at Keeneland September, RNAing for $150,000. Sent to Rice in late May of his 2-year-old season, the lanky bay did not show his trainer much in the mornings.

“As a 2-year-old, he was a bit of an enigma as he did not show much ability or talent,” Rice said from her beautifully decorated office beside Barn 44 at Belmont. “I had to explain to George Hall on multiple occasions that Max Player was making progress, but it was slow and steady. I really couldn’t tell him how much ability this horse had. We finally got him as far along as we could and we put him in a race at Parx, trying to give him an easier race to start out with, and he showed a big, closing kick, which he has done in all of his races at this point, like his father, Honor Code.”

The main word that could be used to describe Max Player’s Nov. 12 debut at Parx is green. Racing wide and at the back of the pack most of the way, the George Hall colorbearer came flying late to be second by a half-length. Back in at Parx Dec. 17 going a mile in the slop, Max Player made good on the promise he showed in his unveiling, unleashing a powerful late turn of foot to win going away by 4 1/4 lengths.

That victory gave Rice the confidence to run Max Player back home in New York, entering him in the Feb. 1 GIII Withers S. over nine furlongs at Aqueduct. Sitting off the pace again, but a bit closer than his previous races, the sophomore powered past his competition in deep stretch for a 3 1/4-length success (video).

After Max Player rallied to victory in the Withers, Rice had her eye on the GII Wood Memorial S. in early April, choosing to take the New York route to the GI Kentucky Derby. While Rice’s star colt certainly had her dreaming of roses, he also had her thinking further ahead to the Test of a Champion. However, the leading conditioner did not envision that this would be the route she would take to get there.

Enter COVID-19. Racing was halted in New York in mid-March and the entire world was put on pause. This forced Rice to not only call an audible, but to call them just about daily as the pandemic kept racing in a state of constant fluctuation.

“After we won the Withers, we were pointing towards the Wood Memorial,” Rice said. “It would have given him a two-month break and it was run on the same track, Aqueduct, where he won the Withers and was at a mile and an eighth. That was canceled because of the pandemic and we were training towards something.”

The horsewoman continued, “With racing canceled in New York, we discussed going to the [GI] Arkansas Derby [May 22] and the [GIII] Matt Winn [S. May 23], but elected to wait for racing to open up in New York. It looks like there will be a lot of opportunity from this point forward and we didn’t want to travel our horse and wear him out before then.”

Racing finally returned to the Empire State June 3 and the Belmont was pushed from its original June 6 date to June 20. In addition, it was shortened from 1 1/2 miles to 1 1/8 miles. In keeping with the topsy turvy nature of 2020, the Belmont had also now become the first leg of the Triple Crown instead of the last as the GI Kentucky Derby was moved to Sept. 5 and the GI Preakness S. was pushed to Oct. 3.

Max Player will break from post three on Saturday with Joel Rosario in the irons for the first time. Rosario looks for back-to-back Belmont wins after capturing last year’s renewal with Sir Winston (Awesome Again). He also won the race in 2014 with Tonalist (Tapit).

“I think Joel is going to fit the horse very well,” Rice said. “Joel has won a lot of Grade Is and most of them have been at a route of ground. He won the Belmont last year with Sir Winston and a few years back with Tonalist. So, I think he fits this horse really well. He is very good on a strong closer.”

Max Player will still be coming from behind in Saturday’s test, but, Rice said she believes he will be closer than he was in his past races. The colt has matured into his large frame, making him quite impressive to look at, and has also made quite a bit of progress in his training during quarantine. He enters the Belmont off a six-furlong breeze on the main track in 1:12.25 June 13.

“I am hoping they will set an honest pace in front of him,” Rice said. “I don’t think he will be as far back as he was in his earlier races. He has more tactical speed than he used to.”

Rice has been asked many times over the past week what it would be like to be the first woman to win a Triple Crown race. While Rice has been breaking down doors for females in the racing industry for decades, such as becoming the first woman to win a Saratoga training title and the first to win a Grade I at Keeneland, the third-generation conditioner prefers to focus on what a Belmont victory would mean for her as a trainer.

“Everyone would love to be on the Triple Crown trail, man or woman,” said Rice, who secured her 2,000th win in January. “It is very exciting to have a horse you really want to run and that you know can get the distance. I’ve won seven training titles in New York, but I’ve never won a Triple Crown race, so we are hoping to get that done.”

At the Belmont draw Wednesday, Rice said they had just not given women enough time to win a Triple Crown race. But, with Rice’s knowledge and diligence and Max Player’s ever-improving talent, the time may just be now.