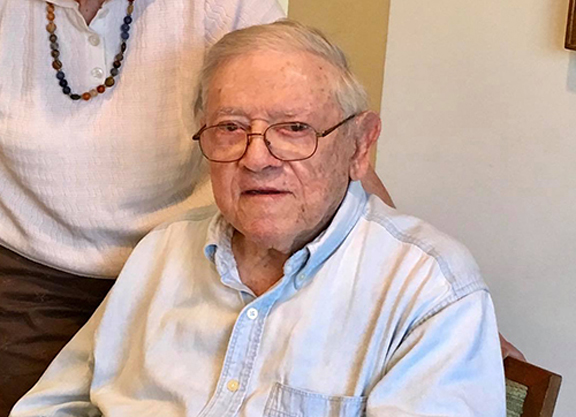 Norman Weisbord, father of former TDN publisher Barry Weisbord and well-known to the racing industry through his role in the Matchmaker Breeders Exchange, died Saturday morning at his home in Tom’s River, New Jersey. He was 95.

Norm and Gladys (Gottlieb) Weisbord were married for 70 years. Born in Philadelphia June 11, 1924, he was a World War II veteran who served in the Pacific theater, and followed his own father into the printing and stationery business after the war.

For the bulk of his professional career, he ran the Plymouth Incorporated stationery business, which made and sold stationery for retail sale. He expanded the business into school supplies, and subsequently acquired the license to print school supplies for the Peanuts products.

“My dad made stationery and school supplies running a business my grandfather started,” Barry Weisbord recalled. “I spent some time working there. After working on the racetrack one semester, Al Goldberg and I headed to Aqueduct to get jobs and learn. My father gave his blessing to us and informed Mr. Kelley we were `worth his attention.’ Dad knew nothing about the racetrack but ended up supporting us by visiting and coming racing often, and even owning some horses with his friends. We always felt his full support.”

Years later, after he sold his business, he and Gladys spent time in Kentucky helping their son run Matchmaker. “We were young,” said Barry Weisbord, “and we needed some business acumen. He and my mom were only too happy to come and help.”

“He got involved, and very happily,” said Gladys. “He loved meeting all of the new people in a new industry. What he brought was the ability to run a business, and run an office.”

The couple had lived most of their lives in Bala Cynwyd, Pennsylvania, but when the American Championship Racing Series started in 1991, they relocated to New Jersey, again so that Norm could help out. In the early days of the TDN, he would often be found standing in front of the row of fax machines early in the morning making sure that people who hadn’t received a fax the night before got their “resend” in the morning.

Weisbord became very involved in his Greenbriar Woodlands community in Tom’s River, and was elected as president of the men’s club and the camera club, and was very well known and respected in the community for his fairness and levelheadedness.

Weisbord is survived by his son, Barry, daughter Ellen, wife Gladys and five grandchildren, including Brad Weisbord of BSW Bloodstock and Elite Sales, and one great-grandchild. He is predeceased by two days by his daughter Harriet, who passed away Thursday.

The family will hold a graveside service Sunday at 2:30 p.m. at Roosevelt Memorial Park, 2701 Old Lincoln Highway in Trevose, PA.