Noholdingback Bear Ready to Roll in BC Sprint 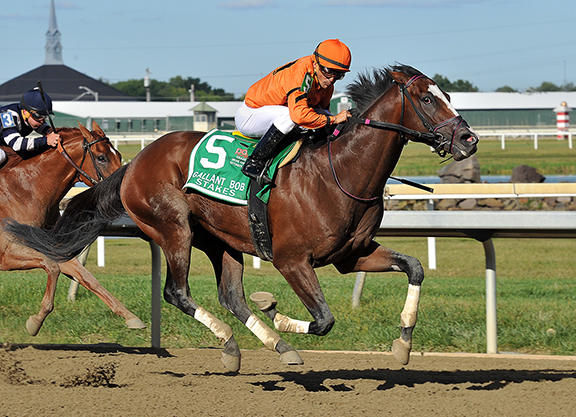 One of the more intriguing divisions of this year’s Breeders’ Cup World Championships is that of the GI TwinSpires.com Breeders’ Cup Sprint. Despite a plethora of strong performances and solid campaigns, the $1.5 million, six-furlong main-track dash appears up for grabs and–as can often happen in this race–simply go to the horse progressing the most at the proper time. In 1987, Very Subtle (Hoist the Silver) fired fresh with an emphatic victory on nearly three months’ rest and after backing up in trip within a campaign that saw her contest four two-turn Grade I events. In 1998 and 2001, Reraise (Danzatore) and Squirtle Squirt (Marquetry) each entered the Sprint with top speed figures and delivered in similar victorious peak performances. In 2012, Trinniberg (Teuflesberg) was simply at his optimum when he blazed his way to victory at Santa Anita, defying his 17-1 odds within a season that saw him consistently face the best of his generation.

The aforementioned Sprint winners are among the octet of 3-year-olds–including last year’s popular Runhappy (Super Saver)– to take on their elders successfully in the nation’s top race at its most common distance. All came into the race the right way, delivered their A-plus games when it mattered and were maturing in all the right ways for their toughest test to date. While GI King’s Bishop winner Drefong (Gio Ponti) is likely to receive his share of attention at the windows this year, with supporters expecting another Runhappy-style performance, another sophomore who arguably appears more similar to the aforementioned foursome of champions is the pride of Canada, Noholdingback Bear (Put It Back).

Owned by Bear Stables and trained by veteran conditioner Mike De Paulo at Woodbine, the $25,000 Keeneland January bargain has raced nine times this year, while tallying three stakes victories, and heads back to Breeders’ Cup weekend one year after finishing a game second on its undercard in the Juvenile Dirt Sprint Stakes at Keeneland in just his second career start. Kicking off his sophomore campaign with a pair of runner-up finishes and a fourth-place effort in Gulfstream Park stakes company, the sizable colt appeared to mature once he returned to his Toronto base in April, reeling off three consecutive wins, including two stakes. He followed such with a game second against older horses in the GIII Bold Venture S. before heading to Saratoga to take on Drefong and others in the King’s Bishop. In an attempt to rate the swift colt, jockey Eurico Rosa Da Silva inadvertently allowed Drefong to cruise through a cushy 23.11 opening quarter and the rest was history. Noholdingback Bear gamely rallied, albeit in vain, finishing third.

While Drefong has trained up to the Breeders’ Cup since, Noholdingback Bear was aimed toward the final lucrative graded stakes for sprinting sophomores, the GIII $300,000 Gallant Bob S. at Parx in late September. Rating beautifully that day behind a legitimate pace of 22.14 and 45.29, the emblazoned colt lived up to his name with a sharp and professional 1 1/4-length win, closing his final eighth in 12.09.

“He had to overcome a few things in the Gallant Bob,” De Paulo said. “He showed me he was good enough to run with those horses and now hopefully the (Breeders’ Cup) horses. He ran a 2 3/4 on the Ragozin numbers and that puts him in position to run with any of them. I really liked his race and he’s training really well. He’s a big, strong, good-feeling horse. He’s always willing and happy.

“He worked [five furlongs Sunday] morning in 59 seconds on the dirt training track here at Woodbine,” De Paulo continued. “We waited a day because of the rain, but he worked really well. I will work him once more next Saturday, provided we have a good track here, and we will ship from here to Kentucky on the 30th and then fly from there to California on the 31st.”

Noholdingback Bear looks to add to what has proven to be a strong correlation between a big Gallant Bob effort and the Sprint. Trinniberg used a game runner-up finish in the Gallant Bob as his final Breeders’ Cup prep. In 2002, Thunderello (Montbrook) was a smart winner of the Gallant Bob before putting a scare in Sprint favorite Orientate (Mt. Livermore), leading until late en route to a half-length runner-up effort. 2014 Gallant Bob winner Favorite Tale (Tale of the Cat) was a game third last year to Runhappy.

Stakes-placed on turf, a stakes winner on synthetic and a graded stakes victor on dirt, the hard-trying Noholdingback Bear will now try to prove that the speedy Santa Anita surface is within the bounds of his enviable versatility.

“He ran some good races at Gulfstream, but when we went up to Woodbine he really ran big, whether that was maturity or the surface,” recollected De Paulo, who has a barn of approximately 40 horses. “When he got back on the dirt at Saratoga, we were hoping he would run a good race, but seven furlongs is not his best and we rated him a little that day. He proved to us (at Parx) that he’s fine on the dirt and luckily I think there may be a lot of pace in the Breeders’ Cup. We have already run him on the biggest days in front of the biggest crowds, so I am not worried about that, either.

“I’ve been training since I was 22 and I’m 52 now,” De Paulo continued. “I was never anyone’s assistant and it took a while to get where we are now. We’re doing well with our stakes horses and he’s one of the best I’ve had. It’s pretty exciting.”

While much of the focus in the Sprint will be on the four formidable favorites–Masochistic (Sought After), A. P. Indian (Indian Charlie), Lord Nelson (Pulpit) and Drefong–a perfect 15-for-15 among them in 2016, one who appears to be coming in ready to fire a career best in the vein of so many before him is Noholdingback Bear. Being an outsider with a big chance is perfectly fine with De Paulo, who runs his stable with assistant and wife Josie.

“I’m going to have a good shower, put on a nice suit and hope for the best,” De Paulo concluded. “We think we have a legitimate shot and he’ll run a big race.”