Home » Archive » Shared News » ‘No Racehorses Ever So Closely Monitored’

‘No Racehorses Ever So Closely Monitored’ 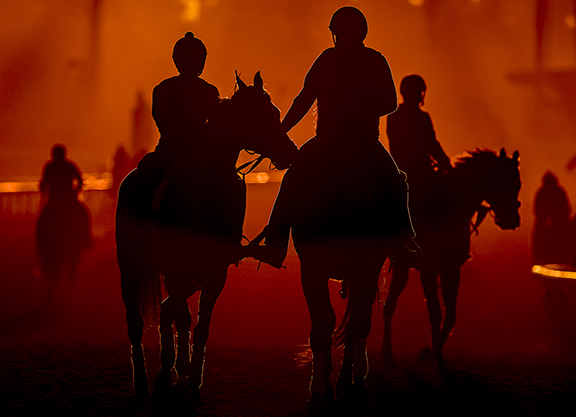 ARCADIA, CA–For all the excitement about the racing, and the glory of the setting, there’s no denying that those pleats and creases in the mountain backdrop might well be the furrows of a worried brow. But nor is there any mistaking the organizers’ determination to do everything in their power to vindicate the decision to persevere with Santa Anita as host of the 36th Breeders’ Cup.

No fewer than 30 veterinarians will be on hand through the two days, applying the enhanced welfare and security protocols introduced after an excruciating series of catastrophic breakdowns here earlier in the year. Twenty of them–co-operating in the respective service of the Breeders’ Cup, the CHRB and the Stronach Group–are meanwhile spending the week in extensive and intensive scrutiny of each and every entrant’s preparations.

“No horses racing anywhere have been more examined or more observed than these,” vowed Dr. Debbie Lampeter, Breeders’ Cup veterinary team leader, to a press conference on Wednesday. “We’re going to watch them from the receiving barn to the paddock, to the post, to the gate, to the wire and, of course, after the race on their way home. Everything is being done to ensure we have done the utmost for their safety.”

Every Breeders’ Cup entrant will have a minimum of three barn inspections prior to raceday, and referrals for diagnostic assessment may ultimately result in mandatory withdrawals.

“This year we have assembled the largest group of veterinarians we’ve ever had: impartial, experienced veterinarians from across the United States,” Dr. Lampeter said. “We have been conducting physical inspections at the barns, looking at the horses at rest and in motion, and we also have teams of vets out on the racetrack observing horses during morning training. There should be no incidents at any place where a veterinarian would not be able to see.”

The detail of the protocols has been established for a while but there were one or two intriguing observations, so far as the future is concerned, from a panel that brought together a wide range of supervisory figures. Perhaps most significant was an acknowledgment from Dr. Dionne Benson, chief veterinary officer of the Stronach Group, that “nothing was off the table” for Santa Anita, when asked about the possibility of restoring a synthetic surface.

Dr. Rick Arthur, equine medical director at the CHRB, noted that the dissatisfaction of certain local horsemen, causing the end of the synthetics experiment in 2010, had been despite “remarkable” improvement in the ratio of fatal accidents.

Looking at the bigger picture, Dr. Arthur also sounded open-minded about anecdotal theories that the breed has been rendered more vulnerable by commercial breeding and excessive medication.

“I think all of us who have been in this game for a long time are concerned that the breed is more fragile,” he admitted. “But I don’t think we have any real documentation that this is in fact the case. The industry discusses the changes in breeding patterns that have really been directed towards commercial breeding, rather than breeding to race. That’s been a monumental change, we can speculate those things but I don’t think there’s any proof one way or the other.”

He applauded guidelines adopted on medication that conform with IFHA standards, with the exception of Lasix, as likely to help establish whether use of therapeutic medication in training (as well as racing) has been masking issues not just from the regulators but also from horsemen, by making it harder to identify when horses need intervention.

Dora Delgado, executive vice president of racing and nominations at the Breeders’ Cup, was in no doubt that this meeting will be judged, not by such traditional indices as attendance and handle, but by averting all avoidable mishap to the participants.

“It’s definitely the number one priority,” she said. “What sets us apart from a lot of other events is the tremendous amount of care and transparency that goes into the Breeders’ Cup: having safe and consistent surfaces, having multiple veterinary exams, having security on these horses. If we can’t put a product out there that gives our fans and the wagering public a sense of confidence, then we’re doing it wrong.”

And ultimately Dr. Arthur believes that the professional community is sharing in that conclusion.

“I actually see a major attitude change, a cultural change, in the horseman community this last year, in Santa Anita particularly,” he said. “So I think all issues are on the table. The changes we have instituted this year, we’ve talked about them for years and weren’t able to get them done. [Now] horsemen have actually backed us up. If you go back to The Jockey Club Health and Safety summit in 2006, and follow the progression of how this industry has worked to improve horse safety, I think we’re well prepared to make the changes that Santa Anita instituted and the Horseracing Board approved. In the end everybody understood what we were doing, and why we were doing it. So I think everything’s on the table, to make racing safer.”