No Mystery about Mystic Potential 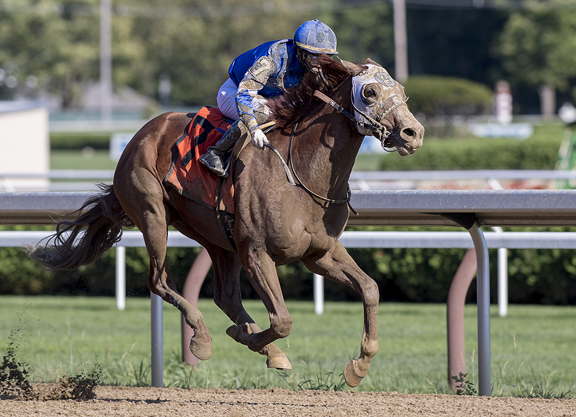 Of all the oddities shoehorned into the 2020 calendar, a Jim Dandy on Derby day felt like one of the most incongruous. In a regular year, this Grade II race serves as a midsummer crossroads for sophomores with an eye on the GI Travers: a chance either to regroup, after participation in the Triple Crown series, or to test the water after missing the Classics through immaturity or injury.

At least this latter function was maintained, this time round, in the coming-of-age of ‘TDN Rising Star’ Mystic Guide (Ghostzapper), a colt for whom even a four-month postponement of the GI Kentucky Derby proved to be not quite enough. His response to a pair of blinkers, however, suggests that he could yet profit from the drastic realignment of the Classics to follow the Derby winner to the GI Preakness S.

In carving his name below that of his grandsire Awesome Again–himself too late on the scene for the U.S. Classics, when winning the race in 1997–Mystic Guide made a breakthrough that had certainly appeared within his compass, despite an odds-on defeat in the GIII Peter Pan S. at the start of the Saratoga meet. The dynamic move he made into third that day, having been going nowhere mid-race, spoke of an unusual talent still in development.

Though again striking from last place, a more focused animal contested the Jim Dandy. This time Mystic Guide’s brawny physique required far less organizing–partly, no doubt, thanks to the blinkers covering up that big blaze of his; but also showing the benefit of trainer Mike Stidham’s forbearance, in never having tried to make him run before he could walk.

In terms of pedigree, there can’t be many horses in training right now whose ability is easier to explain: his first and third dams are both five-time Grade I winners, and his unraced second dam additionally produced a Classic winner in France. And his sire, of course, is one of the most venerable speed-carrying influences around.

Not that this kind of seamless quality routinely plays out in breeding. No less than when we sift a more plebeian family, to find the hidden genetic nuggets that might explain an unexpected talent, this one contains its challenges. Because where we normally ask which cold flints have been rubbed together to spark a flame, here we must ask why so obvious a formula has not worked more consistently.

In each case, we are guilty of the besetting vice of pedigree analysis: picking and choosing such evidence as best fits the outcome. A situation like this, however, should perhaps be viewed as a reminder of how the daily misadventures of the Thoroughbred can unravel even the best pedigrees, the best horsemanship, the most lavish care.

That applies to the Maktoum empire no less than to the rest of us. The fact is that Mystic Guide’s dam Music Note (A.P. Indy), who besides her Grade I wins (Coaching Club American Oaks, Mother Goose, Beldame, Ballerina, Gazelle) made the podium in consecutive editions of the GI Ladies’ Classic at the Breeders’ Cup, has otherwise failed to produce foals commensurate with their sires and trainers. Though herself as sound and consistent as she was talented, she has previously mustered only one that has sustained the basic functionality of a racehorse–and that was a son of Street Cry (Ire) claimed for $16,000 on his second start. He then managed a dozen wins in 64 subsequent starts, no fewer than 60 of them at Penn National.

Who knows what innate ability may have been stifled by ill luck in Music Note’s other foals? But her progeny otherwise include an Elusive Quality filly, unraced after making just $17,000 as Hip 2990 at the September Sale; two foals by Distorted Humor that managed a single unplaced start between them; and a son of Street Cry who did manage to win a race in a light career for Andre Fabre in France, though only after being gelded early.

Music Note was homebred for Godolphin by Gainsborough Stud from the unraced Note Musicale (GB) (Sadler’s Wells), whose dam It’s in the Air had broken the Keeneland November Sale record when acquired for $4.6 million in 1984. From the first crop of Mr. Prospector, It’s in the Air had shared the 2-year-old fillies’ championship in 1978 and won the GI Vanity H. twice, as well as the Ruffian H., Alabama S. and Delaware Oaks. She was tough, too, winning 16 of 43 starts.

Though It’s in the Air produced nine winners in all, the only one to achieve real distinction was the Seattle Slew filly she was carrying at the time of her sale, Bitooh (GB), who won the G2 Criterium de Maisons-Laffitte. But several other daughters proved fertile producers, notably the dam of Storming Home (GB) (Machiavellian), a top-level winner on either side of the Atlantic while best remembered for his chaotic disqualification in the GI Arlington Million. Another daughter, Group-placed Sous Intendu (Shadeed), has produced three stakes winners including G1 Prix Jean Prat runner-up Slip Stream (Irish River {Fr}), as well as the dam of Australian Group 1 winner Alverta (Aus) (Flying Sour {Aus}).

It was the unraced Note Musicale, however, who did most to defray her dam’s purchase. Besides Music Note herself, she also produced Musical Chimes (In Excess {Ire}). A Classic winner for Fabre, taking the G1 Poule d’Essai des Pouliches before finishing third in the G1 Prix de Diane, Musical Chimes was exported to win the GI John C. Mabee H. for Neil Drysdale before becoming another who proved rather disappointing at stud.

The success of It’s in the Air in her second career, somewhat deferred as it was, is gratifying to those of us who believe that quality pooled beneath a pedigree can sometimes percolate unseen through a generation or two. Because her dam, A Wind Is Rising, was certainly a conduit for the right stuff.

You wouldn’t necessarily have said so, judging her as a Florida-bred, one-time winner by Francis S.–a well-bred but largely forgotten stallion, winner of the 1960 Wood Memorial for Harbor View/Burley Parke. Typical, in fact, of the material Mr. Prospector had to work with, when he started out in Ocala. (Albeit there’s an echo of It’s in the Air in some of the most valued animals around today: Francis S. was damsire of Ogygian, whose daughter Myth–herself out of a Mr. Prospector mare–gave us Scat Daddy’s sire Johannesburg.)

A Wind Is Rising certainly had a most remarkable symmetry to her pedigree: both her damsire Nasrullah and grandsire Royal Charger are sons of Nearco; and Royal Charger is out of Nasrullah’s half-sister Sun Princess. This really is as copper-bottomed as the last century gets: the dam of Nasrullah and Sun Princess was a half-sister to the mother of breed-shaping Mahmoud, the pair of them out of the champion sprinter Mumtaz Mahal, the fount of so much vital Aga Khan blood. The mating that produced It’s in the Air, moreover, introduced an extra strain of Nasrullah, his son Nashua being damsire of Mr. Prospector.

I know people get impatient with these ancient parchments, but A Wind Is Rising also surfaces as fifth dam of dual G1 Dubai World Cup winner Thunder Snow (Ire) (Helmet {Aus}). That’s because Sheikh Mohammed doubled down on the family by buying Red Slippers (Nureyev), a great-granddaughter of A Wind Is Rising, from Robert Sangster after she broke her maiden at Ascot in 1991. Red Slippers went on to win the G2 Sun Chariot S. at three, encouraging another deal with Sangster when her half-sister by Storm Bird won both juvenile starts the following season. This was Balanchine, whose bold success against the colts in the G1 Irish Derby would set a bold template for Sheikh Mohammed’s new adventure with Godolphin. And while Balanchine has made a limited impact as a broodmare, Red Slippers produced G1 Prix de Diane winner West Wind (GB) (Machiavellian) as well as Eastern Joy (GB) (Dubai Destination), dam of four graded stakes performers besides Thunder Snow.

Another European luminary of this family is Saoirse Abu (Mr Greeley), a dual Group 1-winning juvenile for Jim Bolger in Ireland (also Classic-placed). She shares a granddam with Red Slippers.

Valuable mares owned by rich breeders get expensive coverings, and their offspring should get top-class trainers. So there are always any number of factors when the likes of Thunder Snow and now Mystic Ridge come good, three or four generations after their maternal line parted.

But I do think it comforting to find a family loaded with this kind of blood. After all, people are always eager to credit a sireline when it has tapered away to no less tenuous a degree.

And actually the sires who have seeded Mystic Guide’s branch of the family only compound the influences we just noted behind It’s in the Air. A.P. Indy doubles up the Nasrullah line through both sire and damsire. And the dam of Sadler’s Wells is by a Royal Charger-line stallion, while her granddam Thong is by a son of Nasrullah.

In a horse as well-bred as this, then, it doesn’t really matter which threads of the pedigree come through: they’re all gold. Both Mystic Guide’s parents, for instance, are out of dams who bred another elite runner: Note Musicale had Musical Chimes as well as Music Note, and Baby Zip had City Zip as well as Ghostzapper. Exactly the same is true of the respective dams of damsire and grandsire: Weekend Surprise had Summer Squall as well as A.P.Indy, and Primal Force had Macho Uno as well as Awesome Again.

Not even that brings any guarantees, as Mystic Guide’s disappointing siblings show. But if luck and judgement are now combining to permit the fulfilment of this pedigree’s potential, then there won’t be a single creaking floorboard on the stage.

And, someday, that could become hugely important. Because if Mystic Guide can earn a legitimate place at stud, he will have a chance to address the one lingering omission in the career of the phenomenal athlete who became his sire.

Justify (Scat Daddy) has announced with unmissable fanfare the emergence of Ghostzapper as a broodmare sire, unsurprising in a grandson of Deputy Minister. And, yes, Ghostzapper has Shaman Ghost standing alongside him at Adena Springs; and McCraken, his most precocious son, now making his way at Airdrie. These two have everything to play for, respectively launching their first yearlings and weanlings. At 20, however, time is running out for Ghostzapper to increase competition among his male heirs.

This is a stallion whose lifetime ratio of stakes and graded stakes winners is comfortably in step with Medaglia d’Oro and Curlin, and way ahead of many other big names. So the stakes are high, with Mystic Guide; no higher, however, than the roots are deep.