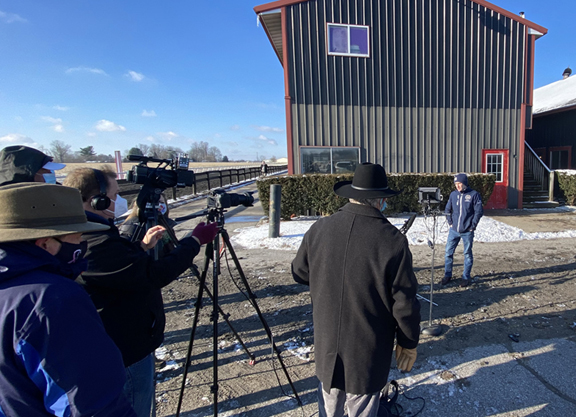 As the calendar turns to February and the countdown continues towards the adjournment of the Kentucky State Legislature on March 30, 2021, the Kentucky HBPA hosted a media event Tuesday morning at Skylight Training Center to get the word out on what Historical Horse Racing means to Kentucky racing and the impacts that would be felt by citizens across the Commonwealth if it were not protected by state legislature.

Certain Historical Horse Racing (HHR) machines, electronic gambling systems that allow people to bet on replays of past horse races, cannot continue unless the Kentucky Supreme Court creates  legislation to allow them to qualify as pari-mutual racing per the definition they alone can define.

Local Louisville-based television stations were on hand to hear the stories of several people who have built their careers in racing as they explained how their lives would change if a solution was not found to maintain the status quo for historical horse racing facilities.

Trainer Tom Drury, who has been in the spotlight in recent months with 2020 GII Blue Grass S. winner Art Collector (Bernardini), bases his outfit at Skylight and hosted the event outside his barn.

“I think the average person in Kentucky obviously knows of the Derby and they know Keeneland, but there are some that don't realize that Kentucky racing happens year round,” he said. “For me as an individual, I've got a family here so being able to travel around the country is just not something that's feasible for me.”

Drury said that this issue is not only relevant to horsemen, but to the entire equine industry. He explained how he has used the same hay farmer outside of Louisville for over 15 years  and spoke of the local tack shop where he purchases all his stable's feed and supplies.

“The trickle-down effect that the equine community has is going to affect us all,” he said. “There are a lot of people that rely on horse racing to feed their families. It even trickles down to Skylight Country Store, where my employees have lunch after work. This is something that has to go through in order for us to survive.”

Along with the direct effect that would be felt by the equine community, Drury said the entire state would be negatively impacted.

He continued, “I think the frustrating part of it for horse trainers is that we're not asking for a bailout or a handout, we're just asking for a level playing field to be able to compete with the rest of the country. We want to stop losing our horses to other places because they have the expanded gaming and things of that nature.”

Even with the purse benefits obtained through HHR, Drury said that keeping owners in Kentucky has been an increasing challenge.

“I think the big majority of owners would love to have their horses in Kentucky year-round, or at least the Kentucky owners would,” he said. “Most of them are very passionate about their horses. They want to go to the races and watch their horses run. The last few years have really came down to a dollars-and-cents thing. If you can run at Turfway Park for $30,000 versus going to Oaklawn and running for $80,000, it's hard to tell a man not to move his horse. The playing field is so uneven right now for the state of Kentucky and it's frustrating at times because we're supposed to be the leaders of this industry.”

Jockey Declan Cannon has traveled the Kentucky circuit for the past five years. The Irishman spoke on the global perception he's seen of Kentucky racing.

“I've only been here five years but I've had so many conversations with people I've met on planes and when they ask where you're going and you say Kentucky, they know that's the home of horse racing. It's a great place to be and it's so important that we keep it protected.”

If Historical Horse Racing were to leave Kentucky, Cannon said that he too would be forced to go.

“It's my living, it's all I know to do,” he said. “For me, it's a huge effect and it will be for a lot of other people too, so hopefully the right thing is done.”

Gary Churchman has been a farrier in Kentucky for over 40 years. He's worked for Drury along with Dale Romans and other local horsemen his entire career. While he did travel to Florida and New Orleans for about four years, ultimately he chose to stay home for the majority of his career.

“My father was a horse trainer and I've worked for many top-tier outfits,” he said. “I've rased a couple of sons and put them through college with this industry. It's been good to me and I want that for all my friends, but it's going the wrong way.

Churchman estimated that roughly 40 farriers work on the backsides of both Louisville and Lexington, although some do travel during the wintertime.

“They talk about all the jobs here in Kentucky, but I don't like statistics and numbers,” he said. “It's lives. It's people. People who raised their families and are putting them back into this industry. Like Tommy said, we don't want to be bailed out, we just want a leg up. These are good people, and people [outside of the industry] don't understand how big of a team it takes to get these horses to the races.”

Marty Maline, the executive director of Kentucky's HBPA, spoke on those who would be most impacted if Kentucky trainers started to look elsewhere to race.

“We have a contingent of people who race at Belterra in the summer and Turfway in the winter,” he said. “There are hundreds of grooms and hotwalkers who live on the backside. If all of a sudden Turfway ceases to be, they will be homeless during the wintertime because their home in the winter is a tackroom at Turfway. Trainers can move their outfits, even though it would be difficult, but what happens to all those people? They want to work. Seven days a week they get up in the freezing cold to take care of horses that they love. It's their job, and not only that, it's their home.”

When the announcement was made last October that the construction of Turfway Park's new grandstand and historical racing machine facility would halt until the HHR ambiguity was sorted out, Maline said that reality set in for many Kentucky trainers.

“Anyone who's been to Turfway knows that Churchill Downs had grand plans to rebuild the whole structure and redo the whole barn area,” he said. “We have leaking tack rooms and a lot of problems on the backside. All that was going to be remedied by the revenue they were going to see from HHR. So right now the horsemen are dealing with the most difficult of situations as there's no facility. The backside is there, but the facility is gone.”

Drury echoed the uncertainty felt by many Turfway trainers in the past months.

“We've been struggling at Turfway for years and all of a sudden Churchill comes out that they're buying it and there's this excitement in the air and people are thinking that finally this is going to go the right way,” he recalled. “You've got guys that normally leave the state in the winter and are suddenly making arrangements to stay here and be back in their own home year-round. Now it kind of feels like the rug got pulled out from underneath us. I can't stress enough how there are so many little guys out there that don't have the luxury to go to Gulfstream or Oaklawn. They rely on Kentucky to feed their families. Without this being addressed, there's going to be a lot of them that aren't going to make it.”

Maline has been in touch with management from tracks across the state and said none have had a positive outlook on if HHR funding were to cease.

“If this isn't resolved, I talked to Ellis Park's management just last week and in no uncertain terms, they're gone. Kentucky Downs will cease to be and it's a pretty good indication that when Churchill stopped all construction, if this doesn't get resolved, Turfway will be cease to be. These are not just idle threats by horsemen, these are real concerns.”

Maline added that his team has already been in touch with the Ohio HBPA, explaining that if the situation gets worse, Ohio's program would also be hurt as the number of trainers who race at Belterra Park in the summer would decrease significantly.

When asked what sentiments he's seen expressed from horsemen across the state, Maline said that most people have been more confused than angry.

“They're so concerned that this has to be resolved,” he said. “It hard for people to understand because they mention that horse racing in so many states benefits from casinos. So here we had an opportunity- HHR is based on horse racing, it has a racing motif to it, so it's our vehicle to get finances rolling into our sport. It's very hard for them to understand, what happened?”

Steve Wade is the owner of Skylight Supply, a tack shop located a few miles down the road from Skylight Trainer Center. The store has been a family business since 1985 and Wade said he is a fourth-generation horseman. Without the training center in Goshen and other Thoroughbred farms and training outfits in the surrounding Louisville area, Wade said their business would be forced to close.

“The Thoroughbred industry is the largest amount of business we do,” he said. “If it weren't for Tommy [Drury] and every other trainer, we wouldn't exist and I wouldn't be doing this any longer. This is in our blood, our DNA. It's all we've ever known and it's very devastating to think it could end.”