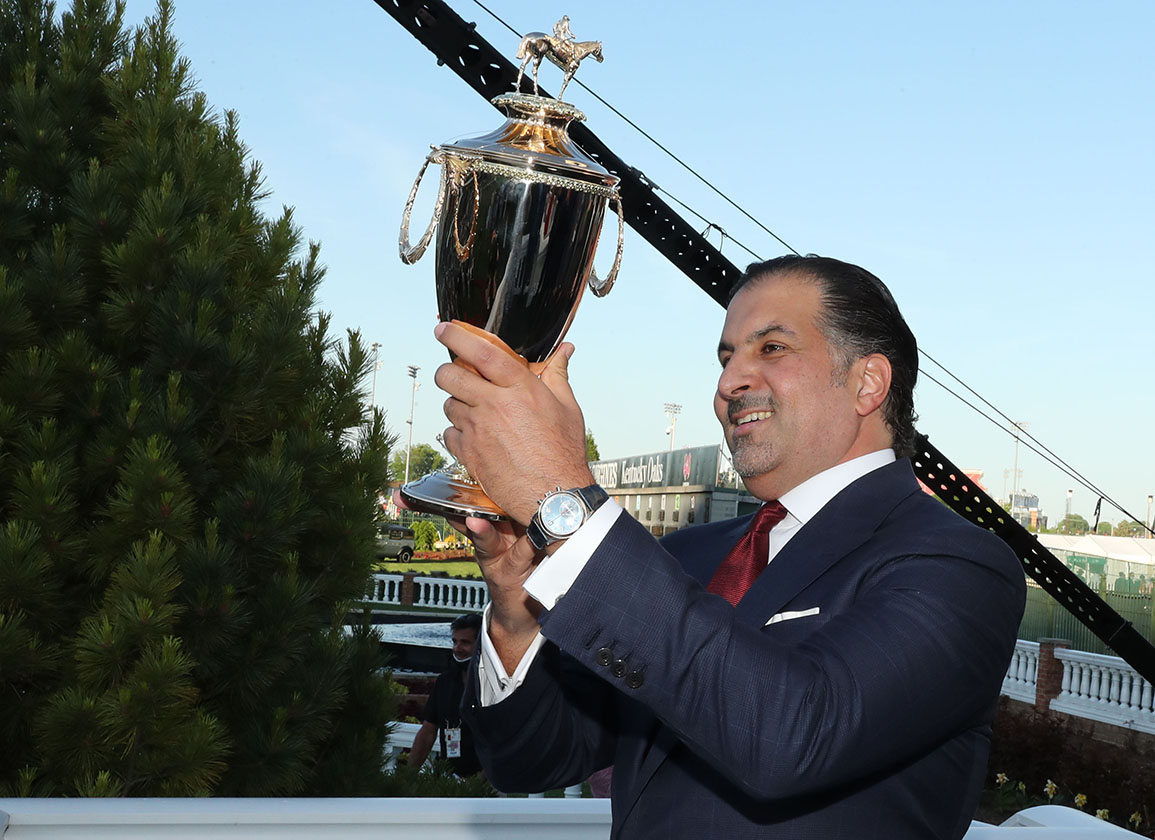 Less than a year after an apparent win in the GI Kentucky Derby turned into a nightmare for Amr Zedan, the owner is set to return to Churchill Downs with a chance to wash the bad taste out of his mouth. A win by GI Runhappy Santa Anita Derby winner Taiba (Gun Runner) would be a redemptive one after his Medina Spirit (Protonico) was disqualified from the win in the 2021 Derby after testing positive for the substance betamethasone, which kicked off what has been a bitter fight waged by Zedan and trainer Bob Baffert on one side and Churchill Downs and the Kentucky Horse Racing Commission on the other.

But Zedan doesn't see it that way.

“I go into the Kentucky Derby with absolutely no ill feelings toward anyone,” Zedan said. “I carry no grudges. I just keep walking, keep going. The due process is in process and I firmly believe that when it comes to our case we will have a satisfactory ending to to the saga. Absolutely, there will be no sense of redemption or wanting to get even with anybody.”

Imagine, though, a scenario where Zedan accepts a trophy from his adversaries, like Churchill Downs Inc. CEO Bill Carstanjen. Zedan says that won't be a problem.

“I haven't sued Churchill Downs,” he said. “I have absolutely no ill feelings toward anybody. The racing commission made their decision, which I have the right to disagree with and, according to the law, I have the right to appeal. Right now we are in the appeals process. The most civilized thing to do when it comes to the dispute is to appeal to the right jurisdictions and that's what we are doing.”

As recently as the beginning of March it didn't appear that Zedan had a horse for this year's Derby. Taiba sold for $1.7 million as a 2-year-old at the 2021 Fasig-Tipton Gulfstream same, but had a few minor issues that prevented him from racing as a 2-year-old. Taiba didn't make his debut until March 5 when he ran away from his competitors to win a six-furlong Santa Anita maiden by 7 ½ lengths, earning a 103 Beyer figure.

After Taiba's debut, Baffert was forced to accept a 90-day suspension handed down by the Kentucky Racing Commission for the betamethasone positive and the colt was turned over to trainer Tim Yakteen

His debut was a promising performance, but conventional wisdom suggested that it was a matter of too little, too late when it came to the Derby. At least that's what Yakteen and Zedan's bloodstock advisor Gary Young told the owner. They were against running in the Santa Anita Derby.

“They wanted to wait things out and then target the Lexington,” Zedan said. “I had to overrule everybody. I told them that our entire program was built around trying to win the Kentucky Derby. I didn't want to go to bed at night knowing that we didn't give it our best chance. I thought we had to give him a shot. Sometimes talent compensates for experience and he showed that.”

It was a huge test, and one he passed with surprising ease.

Facing off against GII San Felipe S. winner Forbidden Kingdom (American Pharoah) and stablemate and GIII Robert B. Lewis S. winner Messier, Taiba appeared to have his hands full and was sent off at 4-1. With Mike Smith replacing John Velazquez, who stuck with Messier, Taiba got past Messier inside the final furlong and drew clear to win by 2 1/4 lengths.

“Considering everything, it was a real relief that we pulled this off,” Zedan said. “Everyone on the team was ecstatic.”

The Santa Anita Derby was far from an easy spot, but Zedan knows that the Kentucky Derby will be much tougher.

“There are so many more moving targets now,” he said. “You have the post position draw to worry about, the kickback, the traveling, a 20-horse field and not a five or six-horse field. I am managing expectations. We're up against tremendous competition. It is a good crop. There are three or four horses that come to mind that are very good horses, very fast horses and horses that stay. It is anyone's race.”

The Medina Spirit saga turned tragic in December when the horse died of an apparent heart attack after a workout at Santa Anita. For Zedan, the experience has been more bitter than sweet. But he came to understand that his best option was to simply move on.

“It's been a roller coaster ride over the last year,” he said. “In one year, I've seen all the ups and downs of the sport. It sounds cliche, but what doesn't break you makes you stronger.”

Of course, having a horse like Taiba makes the process easier. He will be attempting to become the first horse to win the Kentucky Derby in his third start since Leonatus did it way back in 1883. It won't be easy, but he has given Zedan what once seemed highly unlikely–a second chance.