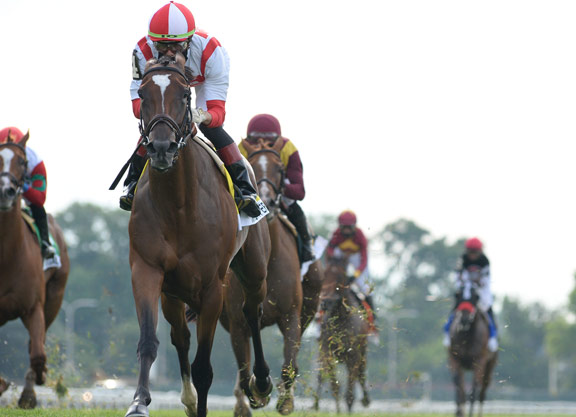 Klaravich Stables' Newspaperofrecord (Ire) (Lope de Vega {Ire}) returned to her sensational juvenile form and proved her decisive score in the GIII Intercontinental S. last out was no fluke with a scintillating victory in the GI Just a Game S. at Belmont Saturday. Breaking on top, the even-money shot hustled out to a clear lead, doling out early splits of :23.79 and :48.1 with champion stablemate and slight favorite, also at even-money, Uni (GB) (More Than Ready) biding her time back off the pace in fourth. Newspaperofrecord was still well clear and under a hand ride from Irad Ortiz, Jr. on the backstretch, but Uni and fellow Brown runner and multiple graded winner Regal Glory (Animal Kingdom) were revving up entering the far turn. There was a very brief moment where it looked like her barnmates would make a race of it exiting the bend, but Newspaperofrecord practically laughed them off, powering clear with ease for a dominant victory. Beau Recall (Ire) (Sir Prancealot {Ire}) got up for second with Jose Ortiz aboard for an Ortiz-brother exacta and Uni held third.

We trained her lightly and she has been training very relaxed,” said trainer Chad Brown, who was winning his fourth straight renewal of the Just a Game. “Last time, she was going really fast and was a little fresh. Irad was confident that he could get her to rate a little bit. I loved our post today, off the fence a little bit. The last-minute showers didn't hurt us either. We all know that she likes a little juice in the ground. It was a good effort after three weeks. I was very proud of her. My team has done a great job with her. She's never looked better.”

When asked what's next, the conditioner said, “I'm going to talk to [owner] Seth Klarman and see how she comes out of the race. She's just had two big races back-to-back. With limited mile races out there, she may be another one that has to face the boys but I don't want to commit her to that yet.”

“Going seven-eighths to a mile is good for her,” said Ortiz, who won five races at Belmont Saturday. “She can go further, too, and I would not be afraid to go a mile and a sixteenth. I just followed Chad's instructions. She came back good and looks healthy and had a really good run. We ended last year a little disappointed, but she came back this year the right way. She's two-for-two, so hopefully she keeps doing it.”

As for Uni, Brown said, “Uni has had a few bumps along the road. She needed some extra time off and had a late start. She popped a splint and we had to pull that out; she missed a couple of works. Although she's run okay with some give in the ground, her best races really are on firm turf. Joel [Rosario] came back and said she was out of sorts having to move early off a moderate pace.”

Undefeated during her 2018 juvenile campaign, Newspaperofrecord won her debut, the GII Miss Grillo S. and the GI Breeders' Cup Juvenile Fillies Turf S. by a combined 20 lengths, all over yielding surfaces. Second to Concrete Rose (Twirling Candy) in the GIII Edgewood S. at Churchill last term, the bay completed the exacta behind her stablemate and eventual Grade I winner Cambier Parc (Medaglia d'Oro) in the nine-panel GIII Wonder Again S. here last summer. Fading to ninth behind Concrete Rose in the 1 1/4-mile GI Belmont Oaks Invitational S. last July, Newspaperofrecord was subsequently shelved for the season and returned 11 months later in the seven-panel Intercontinental on a yielding surface here June 6 She took the field from gate-to-wire, sailing home to an effortless four-length success, good for a 103 Beyer Speed Figure. 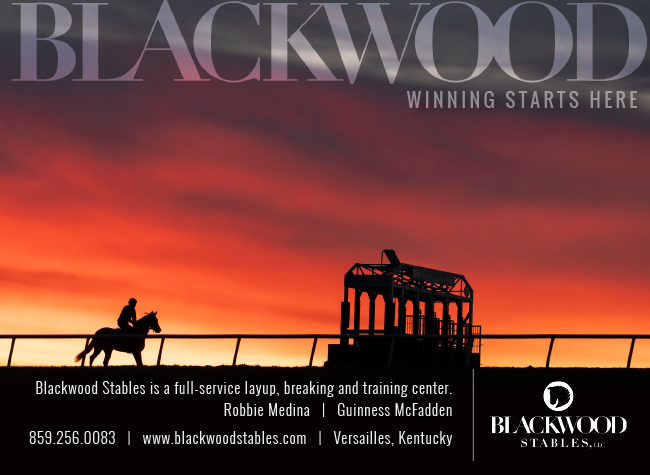