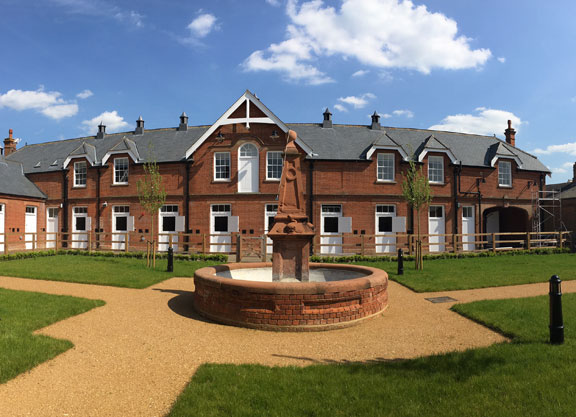 In the year that Newmarket celebrates 350 years as the home of horseracing, the town will receive a major boost on Monday, Sept. 19 with the opening of the new National Heritage Centre for Horseracing & Sporting Art on the site of Charles II's historic Palace House and racing stables.

The launch will be undertaken in stages, beginning with Palace House, which is now home to the British Sporting Art Trust (BSAT) gallery, and the Rothschild Yard, which will provide stabling for eight retrained racehorses and a gallery detailing the work of the Retraining of Racehorses (RoR) charity.

An official opening ceremony will take place later in the year following the opening of the new National Horseracing Museum and a restaurant in The King's Yard and The Trainer's House.

The National Heritage Centre, which is located on five acres in the heart of Newmarket, is the culmination of more than ten years planning, fundraising and construction. It will be the biggest new attraction to open in Suffolk in the last decade and has received financial support from the Heritage Lottery Fund, Forest Heath District Council, Suffolk County Council, the racing industry and a number of private trusts, foundations and individuals from the world of horseracing and beyond.

“The National Heritage Centre will be a world-class tourist destination that has transformed the centre of Newmarket providing a cultural quarter for the town,” said Chris Garibaldi, Director of the National Horseracing Museum. “It will be a national resource for the whole of the community as well as a showcase for the British racing industry. I am so proud to be part of this wonderful project and cannot wait to see the public enjoying it.”

Racing historian and Chairman of the Executive Committee of the BSAT Tim Cox added, “For 40 years we have dreamed that one day we would have a permanent home for the display of sporting art in the UK.  We can now celebrate our 40th birthday in style.”

Having been built between 1668 and 1671 following Charles II's return to Newmarket after the Civil War, Palace House was later sold to Baron Mayer de Rothschild in 1857 and a new stableyard was added to the complex in 1903. The Rothschild Yard will be open to visitors to Newmarket's open weekend on Sept. 17 and 18 and will have a number of well-known retired racehorses on show, including two of Godolphin's Dubai World Cup winners African Story (GB) (Pivotal {GB}) and Prince Bishop (Ire) (Dubawi {Ire}), as well as Ascot Gold Cup winner Papineau (GB) (Singspiel {Ire}). Joe Grimwade, former Manager of the Royal Studs, has been appointed as RoR Yard and Public Engagement Manager at the centre.

The 250th anniversary of Tattersalls will be the subject of the first temporary exhibition at the National Heritage Centre. Entitled 'Selling Champions, Tattersalls at 250', it will run from the opening until Jan. 8, 2017.