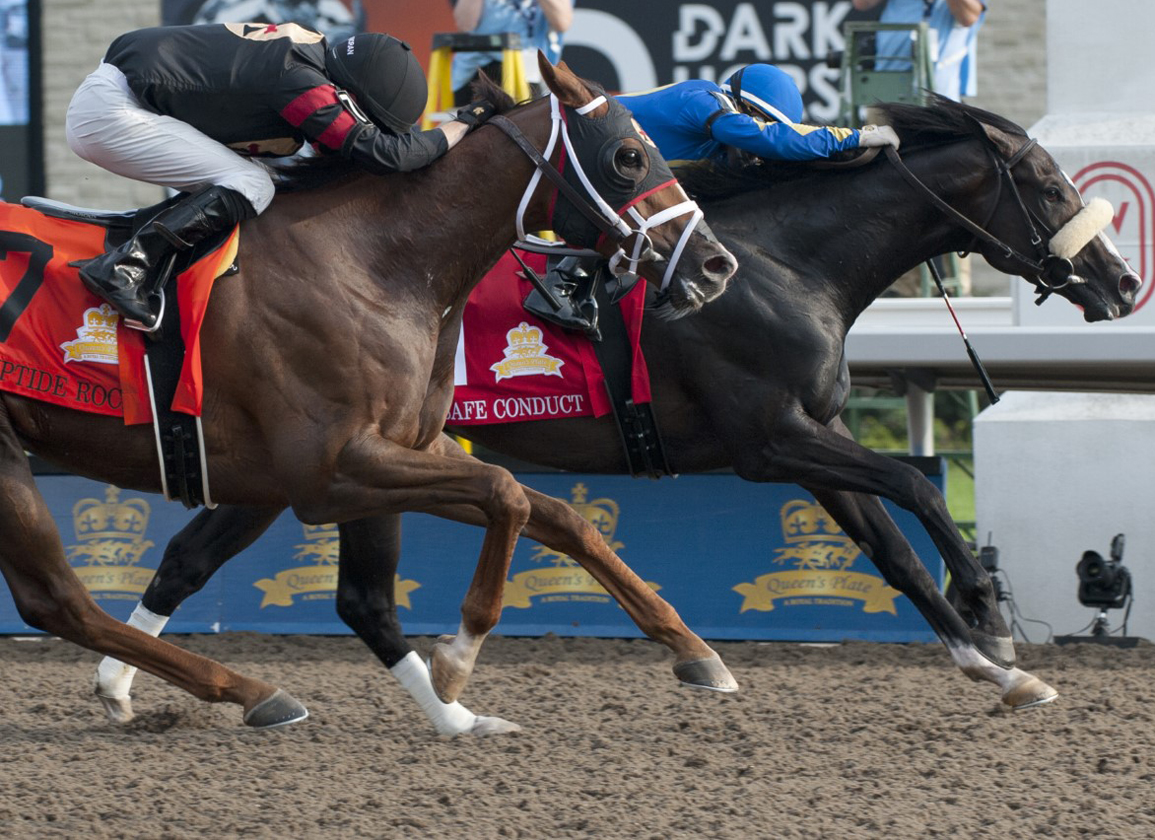 WellSpring Stables' New York invader Safe Conduct (Bodemeister) pressed, pounced and just held off the late-charging Riptide Rock (Point of Entry) to win the 162nd Queen's Plate in a dramatic finish at Woodbine Sunday. With top U.S. jockey Irad Ortiz, riding in his first Queen's Plate, in the irons and making his first start over a synthetic surface, the 3-1 favorite was under a hold while tracking longshot pacesetter Take a Chance (Munnings) through fractions of :24.01 and :48.37. The bay colt rolled up to challenge the pacesetter nearing the stretch and strode to the lead under his own steam. He was determinedly holding off a host of challengers at midstretch, but it was 11-1 shot Riptide Rock closing furiously down the center of the track who came closest to scoring the upset.

“He's shown some speed before to the half, :48,” Ortiz said of the winner. “We thought maybe two horses had speed and we wanted to be out of the traffic, so I broke running. I sat second on the clear, I bided my time, waited for the right time to roll and when I asked him to go, he kept fighting down the stretch. He kept moving forward. I saw somebody was flying outside… that was very close, I didn't know if I won the race after the wire but thank God I did.”

After experiencing his first Plate victory, Ortiz said, “It's a great feeling always to come here. It's my pleasure to come here. I've got a lot of fans. They showed me some love. I really enjoyed it.”

Safe Conduct, a maiden winner second time out over the Saratoga turf last August, began his sophomore campaign with a runner-up finish in a nine-furlong optional claimer at Gulfstream Mar. 14. He won at that level over the Belmont lawn May 2 while defeating subsequent GII National Museum of Racing Hall of Fame S. winner Public Sector (GB) (Kingman {GB}), before jumping to the graded ranks. He was fourth in the off-turf GIII Pennine Ridge S. May 29 and was a well-beaten eighth over a turf course labeled good in the July 10 GI Belmont Derby last time out.

Pharmaceutical Corporation, which he started in 1999 and sold in 2011. WellSpring Stables, based in Colts Neck, NJ, is a multiple stakes winning owner with 87 career wins from 780 starts and earnings just shy of $4 million since it began operations in 2006.

“Blessed,” said Kursner. “Blessed. I want to congratulate Dr. Vukovich and the wonderful people at WellSpring. They've done a marvelous job bringing this horse along. And of course, Phil Serpe.”

Safe Conduct is Dancing Duchess's second foal. The 9-year-old mare also has a yearling colt by Collected who sold for $11,000 at last year's Keeneland November sale and for $30,000 at this year's OBS January sale, as well as a 2-year-old filly by Exaggerator and a foal filly by Munnings.