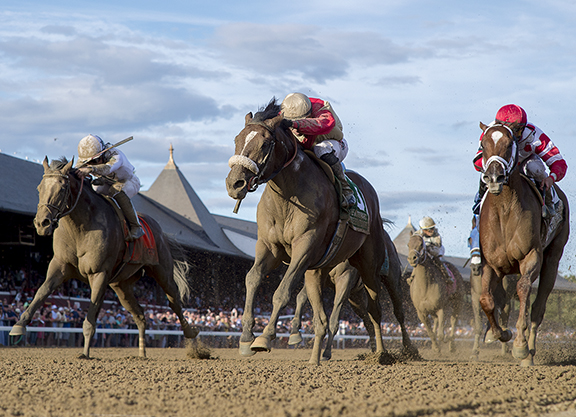 Airdrie Stud has developed a reputation of having the Midas Touch when it comes to young, middle-market stallions. Now, with the addition of two multiple Grade I winners-Preservationist and Divisidero-joining their roster for 2020, their ranks have swelled to 11. The TDN's Katie Ritz caught up with Bret Jones to talk first about Woodward and Suburban winner Preservationist.

BJ: Preservationist, physically, is a big beautiful horse. He's 16.2 ½. He was a $485,000 yearling purchase by Centennial Farms, so I think that tells you what sort of physical he is. He's a very correct and a big, good-moving, beautiful horse that is exactly the type that we try to put in the barn here.

KR: Can you talk us through the main points of his pedigree?

BJ: The pedigree on Preservationist is absolutely one of the greatest things we can advertise because he's so well-bred, top and bottom. He's by Arch, who's been a fabulous sire, has been a very important sire, as we all know. And on the bottom is that great Emory Hamilton and Helen Alexander family of Chic Shirine. So really it's top and bottom of the best King Ranch blood that there is. The quality there is obviously very evident, and he's a horse that exudes a lot of quality physically when you see him. He looks like he comes from special stock and it's because he does.

KR: Take us through his race record.

BJ: It was well-documented that Preservationist didn't become a graded stakes winner until he was an older horse. And it was also well documented that that was because he had had some setbacks along the way that had kept him from getting to the races and kept him from showing the potential. And frankly, that was one of our reservations when we first began investigating him, was that we thought, well, this is a late-maturing horse. This is a horse that didn't get good until he was older. That was debunked very quickly when we talked to the Allen Jerkens team.

They said as a two year old that this horse was as good or better than anything else they had at the barn, but that he had little setbacks along the way that unfortunately kept him from showing his full promise in the afternoons. But the talent was always there. The speed was there and it was more really by happenstance that he was a distance horse later in his career. But this was a very good horse, and seemed to be a very good horse from the start.

KR: Let's start with the Suburban.

BJ: The Suburban was when he really arrived kind of on the national scene. It was a hugely impressive performance. He was in there against a very good horse, obviously, a GI winner in Catholic Boy. They were nose to nose at the top of the stretch and Preservationist kicked on and won like a really good horse. He really showed everybody that he belonged in that conversation with the best older horses in the country winning off by about four lengths.

And the Woodward just showed what kind of a tough horse he was, because he did not have a great trip. He had to really kind of bully himself into a hole that was tough to make and he had the determination to go on and do it and beat some very good horses that day as well.

This was a very, very talented horse. He had speed as well as the ability to stretch out, which he did in his two most significant wins. Another thing that really drew us to him was that he could also go three quarters in 1:09 1/5. When he broke his maiden, he ran six furlongs in 1:09 1/5 and got a 3 Ragozin number in that performance. I can't think of too many maiden-breaking races that come back with a 3 Ragozin. That talent and the fact that he could build on that and become a top handicap horse were great attractions to us.

KR: What has been the response from breeders so far?

BJ: It has been fabulous. He's a very easy horse to sell on the end of a shank. Big, beautiful, exactly the type that the commercial market likes to see. And that has made our job a lot easier.