New Horizons For Vercken With Equiways 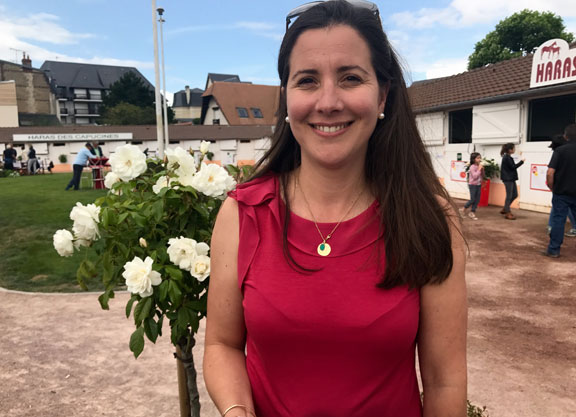 They say timing is everything.

It was early 2016, and Camille Vercken, the longtime head of the Syndicat des Eleveurs, the French Thoroughbred Breeders Association, decided it was time to move her young family from Paris to their home in Normandy. Just one year later, she has not only made the move, but has completed a highly selective course of study in biosecurity and launched a company, Equiways, which shows farms how to reduce their risk of contamination and transmission of potentially deadly viruses and diseases.

The fact that the degree would come about at the exact time where racing experienced two serious, costly and deadly outbreaks of disease on two continents was merely chance.

equine herpesvirus paralyzed the backstretch at the Fair Grounds in Louisiana. Just three months later, there was an EHV-1 outbreak in April at Jean-Claude Rouget's barn in Pau. These high-profile cases followed the 2007 outbreak of equine influenza which shut down racing in Australia, costing the industry millions. At its peak during the Australian crisis, 47,000 horses were affected on almost 6,000 different properties.

“That is the worst thing that could happen,” said Vercken. “You have one horse coming back from training with rhinovirus and within a few days the whole barn has it. You see how quickly the Australian flu spread. Within four days, it affected Thoroughbreds, Warmbloods, racetracks, stallions and it spread out throughout Australia.” While people cannot become infected with EI, they can carry it on their clothes, shoes, and bodies and spread the infections to other horses with which they come into contact.

And therein lies much of what is at the heart of Vercken's new business.

“Basically, what I do is risk assessment at stud farms, stallion barns and racetracks. Anywhere horses meet, and where people and equipment come into contact with them. Biosecurity is basically the process of reducing infectious disease and the proliferation of it in one structure and the containment of it so it doesn't go to other structures. You say biosecurity and people think it's very complicated. But it's not at all.”

Vercken's model is simple: imagine her, she says, as a drone over your farm, watching the movements of horses, people and equipment as they go through their daily routine. After a half-day of observation, clients receive a schematic of their farm showing who has gone where throughout the day, and identifying risky procedures. Looking at the results and the amount of traffic in and out of every area can be a bit shocking.

She then divides the farm into three zones: green, amber and red, and shows the farm manager how the traffic should be moving. Anyone can come and go in the green zones, which typically are comprised of the parking lot, visitor center and offices. Movement in and out of the amber zones are somewhat restricted, and the tightest procedures implemented in the red zones.

“Red is the color you absolutely have to protect,” she said. “It's the nuclear reactor. Inside the stallion barn, the foaling barn. At farms with AI, that could be the lab.”

Her final plan also identifies five major problems and poses solutions and new procedures. “I give them no more than five, because people are not going to follow the rules if it's too complicated. Then for every problem I identify, I do a matrix. You can see for each problem, how you could spread rotavirus, pneumonia. I look at the layout of the barns for each problem identified, propose at least three solutions and then together with the farm, we choose which one fits their farm best. Because if you're not going to apply it, my work is not worthwhile.”

One recent farm with which she worked, run by veterinarians, thought they were doing a good job by having the AI delivery man park in the green zone to pick up the samples.

“They are vets, so they have a knowledge of biosecurity beforehand,” said Vercken. “So the manager tells me he used a semen delivery service who went to all the farms. So he tells me the car parks there, far away from everyone. I said, 'Good, the car should be there in the green parking, far away from everyone. So where does the man go then?' 'Oh, then he walks through here, into the lab to pick up the boxes.' It would be like allowing the Amazon delivery man to go into the operating room to deliver his packages. It's just about the same thing. Because he delivers everywhere, and if he walks through a little foal manure with rotavirus, what then? He's just walked that into your lab. So now, he picks it up outside the facility in a refrigerated locker.”

Hiring Vercken allows farms to make her the bad guy when it comes to instilling new procedures among staff and supplier.

“You go to a farm and they say, 'here is the parking place for the vet. Right in front of the stallion barn. And here is the parking place for the farrier. Right in front of the isolation barn.' And it's quite hard for the farm owner because the vet has been parking there forever. So it's easier for him to say, 'you know that girl came and studied what we do, and now she wants you to park here. We are asking everyone to park a bit further down.' I can be the annoying person in the system. I love it.”

Vercken also color-codes equipment which shouldn't be shared across the farm. “The pitchforks and the wheelbarrows in the stallion barn are blue. The ones in the mares barn are pink. That way, when someone sees a pink fork in the stallion barn, right away they know that's wrong.”

She also works with the structures already existing at the farm. “I don't come in with a bulldozer and say, 'we have to start fresh.'”

“People are already working hard,” she said. “They are working hard to take care of the horses and sell nominations, and I can come in from the outside with the knowledge I have and provide them with a fresh perspective.”

While biosecurity experts already existed, their advice tended to be in cookie-cutter form. Vercken brings custom solutions. “I think some people just get general advice,” she said. “Where I am a pioneer is that I do everything tailor-made for the farm.”

Vercken, 37, has always been a trailblazer. The daughter of a Parisian lawyer father and financier mother, she said she dreaded the thought of going to work in an office “with all of those books” for her whole life. Introduced to racing by a family friend with horses, by the age of 12, she was begging the family to not go on vacation during the summer, rather, to let her spend her holidays at Deauville mucking out stalls. After graduating from the university at Dijon, she headed to America, where she spent two years working for bloodstock agent Peter Bradley, and another year selling nominations at Castleton Lyons. When she met Martine Head, she came back to France to work at Haras du Quesnay, where she spent three years before accepting the job with the French breeders.

Since leaving that role, she has not only launched Equiways, but is helping to manage Haras du Vieux Pont for new owners who purchased the farm outside Lisieux from Sven and Carina Hansen last year. She is also writing a children's book series on historical horses, developing a comic strip, has launched a pinhooking venture and is raising three children under the age of five.

But helping to prevent the spread of infectious disease in the industry could yet be her most important role.

“There isn't a 100% solution,” she says. “That's next to impossible. But as professionals, you want to reduce your risks. Maybe you have foals every year with rotavirus, and you look around and you don't know why it's happening to you, because you feel like it's not happening to other people. A foal at the vet clinic on an intravenous drip is €1,000 per day.”

“I see big applications for Thoroughbred stud farms,” she said, “and huge ones for racing barns. In a racing barn, you have a huge turnover in people, and everybody is in a rush. Even if you have super people, you cannot help it. Everyone knows their staff has their own horses. Every morning, I take care of my horses before I go to work. What if one of my foals has rotavirus, and then I go to work in someone else's foaling barn? So every day, I change my clothes. I change my shoes. But how many people do that? How many farm managers make sure their people do that before they come to work?”