New Bay's Saffron Beach In Command In The Sun Chariot 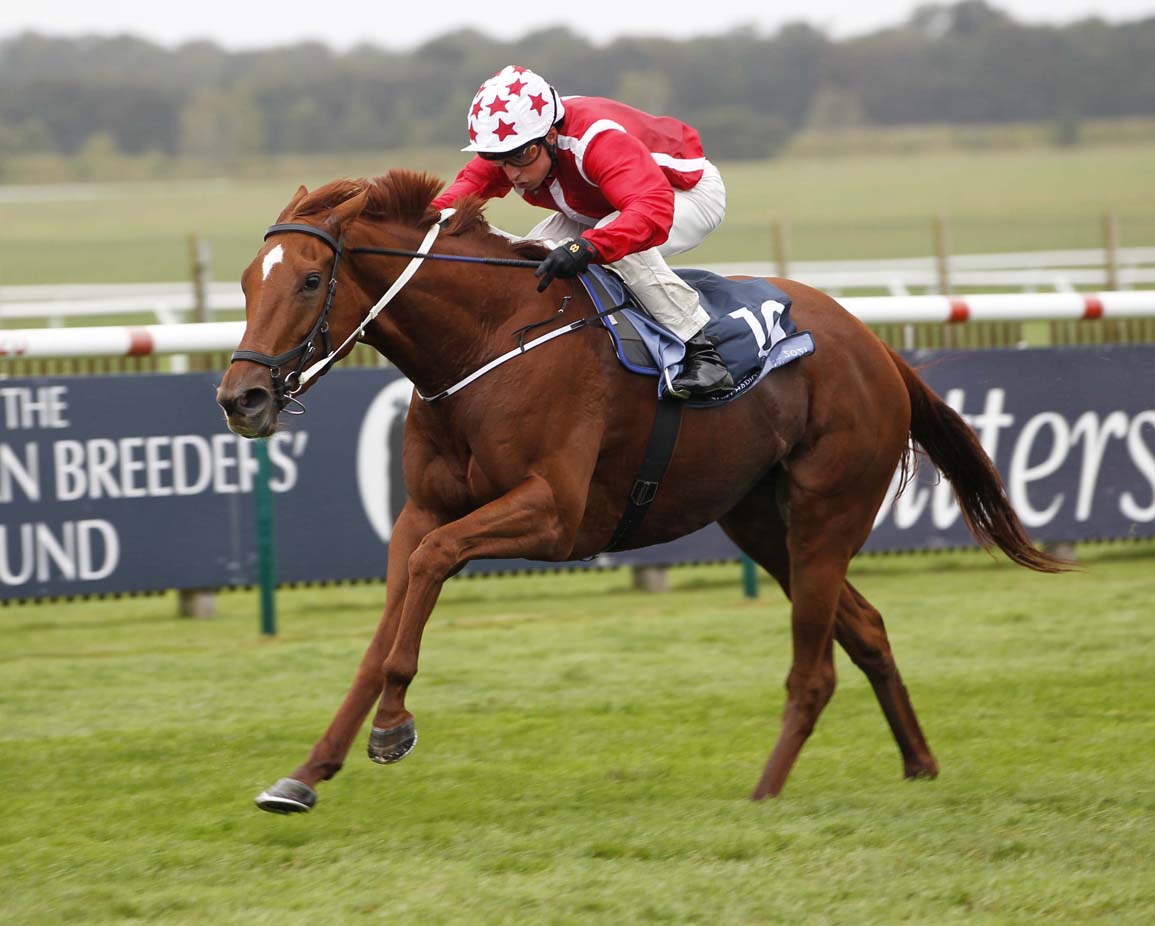 A picture of resilience on Newmarket's Rowley Mile on Saturday, Saffron Beach (Ire) (New Bay {GB}) comprehensively turned around the form of the G1 1000 Guineas with Mother Earth (Ire) (Zoffany {Ire}) in the G1 Kingdom of Bahrain Sun Chariot S. Runner-up to the Ballydoyle representative on contrasting good-to-firm in the May 2 Classic over this trip, the Jane Chapple-Hyam-trained 3-year-old who sports the Sangster silks was 5-1 off a win in the G3 Atalanta S. at Sandown Aug. 21 and bowled along under William Buick at the head of the group racing towards the far side. In the clear approaching the furlong pole, the chestnut who had won the G3 Oh So Sharp S. here last October was not for stopping and galloped relentlessly into the headwind to record a three-length success from the 11-4 favourite Mother Earth, with Dreamloper (Ire) (Lope de Vega {Ire}) a head away in third. For her trainer, it was a landmark triumph and she said, “It is definitely extra special to win my first group 1 in Newmarket, as I've been here since I left school at 17. It has been a long time. I was a student that started at the National Stud and have worked my way through to where I am today. The race seemed to go like two miles not one mile. It was a hard slog that last furlong, but I'm proud of her.”

Having headed into the winter an unbeaten winner of one of the key Guineas pointers, Saffron Beach was awarded due respect in the spring and her second to Sacred (GB) (Exceed and Excel {Aus}) over what at that stage was an inadequate seven-furlong trip in the Apr. 14 G3 Nell Gwyn S. only served to fuel the fire. Only Mother Earth could take her measure in the first fillies' Classic and following a fruitless tilt at the June 4 G1 Epsom Oaks, where she was 27 lengths adrift of Snowfall (Jpn) (Deep Impact {Jpn}) in eighth, she was back at Newmarket to contest the G1 Falmouth S. Only 11th behind Snow Lantern (GB) (Frankel {GB}) in that July 9 feature, she emerged with an excuse having scoped dirty and her subsequent success in the Atalanta showed she was coming around again viewed after the second and third Waliyak (Fr) (Le Havre {Ire}) and Ville de Grace (GB) (Le Havre {Ire}) had subsequently scored in the G3 Prix Bertrand de Tarragon and Listed John Musker Fillies' S. respectively.

William Buick, who was missing out on Godolphin success at ParisLongchamp, was gaining handsome compensation as a passenger on the ruthlessly determined Saffron Beach. “She was a nice spare ride to get and when the rain came, it became even more interesting,” he said. “She is Adam Kirby's ride and he had to go to Ascot today. It is unfortunate for him, but he called me this morning and told me a lot about her so thanks to him. She is just a very uncomplicated filly who gets the mile well. Her stamina came into play and she has proven in the past she handles this track well. She is a very good filly.”

Chapple-Hyam added, “She has trained well the last month and this was our goal a long way out. We took the group 3 in at Sandown as a confidence boost for her and it has paid off. She has knocked on the door in the Guineas and now she has gone and done it today. I'm really pleased for the connections. We knew there was a group 1 for her and today was the day. You don't mind waiting if they do it. I left it up to William what he wanted to do as she is tough, fit and strong. He asked me and I said, 'I will leave to you as you are the maestro'. She deserved that, as it has been a long season.”

Mother Earth gave her best again and the ultra-consistent Ballydoyle stalwart is due to keep going. Kevin Buckley was representing Coolmore and said, “She tries her heart every single time. She always shows up as the form suggests and it was another good run. She was beaten by a good filly and I'm delighted for Jane to have her first group 1. They are getting their toe in now, but that is not an excuse. We will talk to Aidan tomorrow and see what he says, but I don't see any reason to suggest why she would stop now. That is up to the lads if she races on next season. She has danced a lot of dances, but she will tell us what she wants.”

Saffron Beach, who was a cheap purchase at 55,000gns at the Tattersalls December Foal Sale, is out of Falling Petals (Ire) (Raven's Pass) who was sold by Godolphin to the China Horse Club for €235,000 at the 2016 Goffs November Mares Sale. She is a half-sister to the G1 Middle Park S. third Huntdown (Elusive Quality), whose full-sister Continua produced the G3 World Trophy S. and G3 Molecomb S.-winning sire Cotai Glory (GB) (Exceed and Excel {Aus}). The second dam is the listed-placed Infinite Spirit (Maria's Mon), while the third dam Eternal Reve (Diesis {GB}) annexed the G3 Matron S. and was runner-up in the G1 Coronation S. and is related to the leading sire Miswaki. Falling Petals' unraced 2-year-old colt by Cotai Glory's sire Eshkaal (Ire) is due to sell at the upcoming Tattersalls Autumn Horses-in-Training Sale, while she also has a yearling filly by Australia (GB) selling during Tuesday's session of the Book 1 Sale. Her 2021 colt is a full-brother to Saffron Beach.