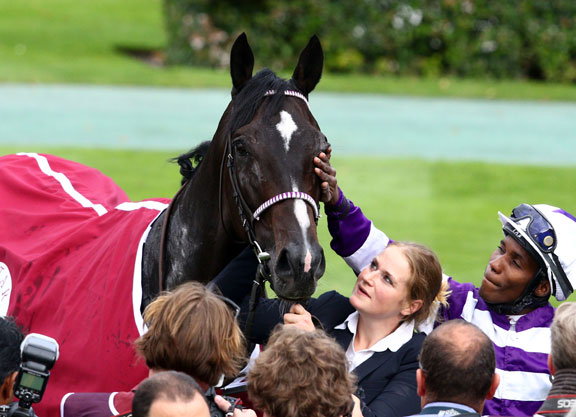 The French-trained Elliptique (Ire) and the German Potemkin (Ger), both by New Approach (Ire), will rematch today at Capannelle in the Premio Roma GBI Racing, the last Group 1 of the European season. Elliptique won the first round, July 31 in the G1 Bayrisches Zuchtrennen at Munich, leaving his rival in third place, beaten one length at the end of a clean race with no hard luck stories.

Elliptique will be the first runner at Capannelle in 10 years for trainer Andre Fabre, who won the (then) G1 Derby Italiano with Gentlewave (Ire) (Monsun {Ger}) in 2006. The 5-year-old Elliptique tried the G2 Prix Foy, a trial for the G1 Prix de l'Arc de Triomphe in September, but failed to stay the 2400 metres, finishing third. Potemkin, after his defeat at home, traveled to France and scored easily in the G2 Prix Dollar Oct 1.

The ground conditions could be a major factor. The going was heavy Friday at Capannelle and more rain is expected on Sunday. “We have a path, seven meters wide, of fresh grass along the inside rail but it all depends when and how much rain will hit the course,” said Marco Oppo, Capannelle's racing officer.

The British-raider Robin Of Navan (Fr) (American Post {GB}) will relish the heavy ground. He won the G1 Criterium de Saint Cloud under those conditions last season but has thus far failed to score in five starts this year. Voice Of Love (Ire) (Poet's Voice {GB}) , who landed the G3 Premio Del Piazzale at San Siro Oct. 16, is the best of the home team. The 3-year-old could provide a third consecutive win in the race to the yard of Alduino and Stefano Botti following Priore Philip (Ity) (Dane Friendly {GB}) in 2014 and Dylan Mouth (Ire) (Dylan Thomas {Ire}) in 2015.