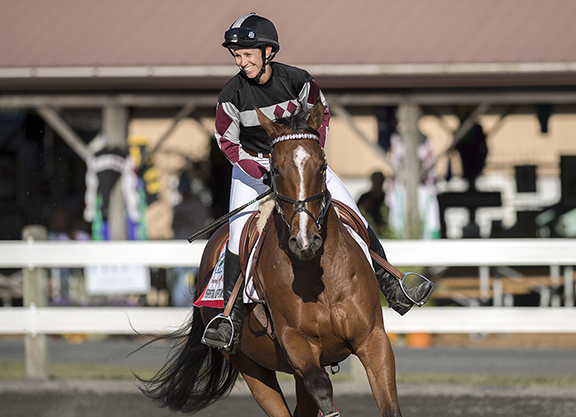 It was only this past Tuesday that the National Thoroughbred Racing Association (NTRA) invited fans to submit photos or videos to social media of their Off-Track Thoroughbreds (OTTBs) for inclusion in a series of video montages to be played during the upcoming Eclipse Awards, but the enthusiastic response already has overwhelmed those charged with weaving this tribute together.

“It's been terrific,” said Keith Chamblin, the NTRA's chief operating officer, who said that the NTRA offices have been inundated with emails from OTTB owners, alongside the slew of messages posted on Twitter, Facebook and Instagram.

“I don't know if it was a mistake or not, but the poor woman in our office, we'd included her email as a contact to purchase Eclipse Award tickets,” Chamblin added. “She's been hearing from owners of Off-Track Thoroughbreds from all over North America who want to tell her about their beautiful and loving pets, how they can't wait to submit, and is she the contact.”

The outpouring of support has acted as a reminder “why we're in this wonderful sport,” said Amy Zimmerman, who, along with Keeneland's G.D. Hieronymus, is co-producer of the Eclipse Awards broadcast.

“Every single one of us is in here, in this business, because of the horse,” Zimmerman said. “We spend so much of our time as an industry fighting about so many different things, we lose sight of that fact: we all love the horse. That, more than anything, is what the Never Eclipsed is showcasing.”

Within days of the NTRA's request for photos or videos from owners of OTTBs to be posted on Twitter and Facebook using the #NeverEclipsed hashtag, both social media platforms have been swamped with submissions from figures at all strata of the industry and beyond. “The couple of times I've been to the hashtag on either Twitter or Instagram, you can barely get to the bottom of the page,” said Hieronymus. “We've been absolutely blown away.”

According to Zimmerman, the idea for the concept arrived in a Eureka moment on a drive from Phoenix to Tucson, Arizona, for the latest Global Symposium of Racing. “This year, perhaps more than recent years, there's not a lot of suspense to most of the awards, so, I was just kicking around ideas to why people would want to watch,” she said.

“Let's be honest, there have been some tough spots in the year. But one of the bright spots that continues to shine is our OTTBs, and how much people really love these horses. And that's why we want to bring those horses and those people into the room.”

One of those people is Anita Motion, who has made a series of #NeverEclipsed social media postings illustrating the second careers of the horses that have passed through the barn of her husband, trainer Graham Motion.

“I don't typically jump on these things, but I just thought that this is something that we could get behind, and it would be easy to do,” said Motion.

“We have a huge amount of horses that we have rehomed—I could go on all day about them,” she added, pointing to the “Warriors” page on the stable website which tells the individual stories of former Motion-trained horses who have each enjoyed successful vocations after the sun had set on their racing careers.

“We're lucky, in our office, we have Sue Kenny. A big part of her job is following up on all our retirees and rehoming,” said Motion, who emphasized how, were it not for her time-consuming obligations to the barn, she would be more heavily involved in the world of OTTBs. “But [Kenny] keeps track of the horses pretty aggressively, and she really loves doing it.”

According to Hieronymus, the challenge will be sorting through all the submissions, deciding who makes the cut for the live broadcast. “I certainly don't want to leave anybody out, but I have a feeling we're going to have to. And if that's the case, we'll make sure we share them socially later.”

Indeed, Chamblin confirmed that every submission will be included in an awards show post-script “via the internet and social media,” said Chamblin. “We're a little overwhelmed by the response at the moment, which is a good problem to have.”

And there's next year, perhaps.

“We're always looking for something new and unique,” said Chamblin, adding that the Never Eclipsed concept could “absolutely” be replicated in future iterations of the show.

“When you strike on something that's so overwhelmingly popular and demonstrates the love and compassion that people have for these beautiful animals, I think this could be part of the Eclipse Awards for quite some time,” he added.

The Thoroughbred Aftercare Alliance, which has awarded more than $17.2 million in grants to accredited Thoroughbred aftercare organizations since 2012, is the official charity of the Eclipse Awards. The deadline for submissions this year is Jan. 17.