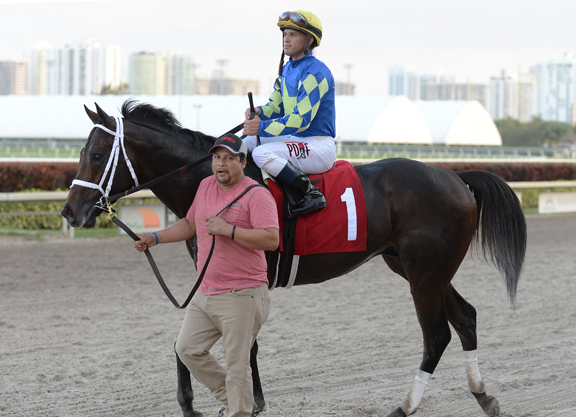 Qatar Racing and Starlight Racing's three-time Grade I-placed Neolithic (Harlan's Holiday–Swingit, by Victory Gallop) has been retired from racing and will enter stud in 2018, Starlight Racing's Jack Wolf confirmed to the TDN Sunday. The news was first reported by Blood-Horse.

“This horse is by Harlan's Holiday, and Harlan's Holiday has proven to be a sire of sires with Into Mischief and Shanghai Bobby,” Wolf said Sunday. “As I told the partners yesterday, it's amazing what he passes on to these horses as far as the try and the determination.”

Neolithic paired two big efforts together when third in both the GI Pegasus World Cup Jan. 28 and G1 Dubai World Cup Mar. 25. He captured a Saratoga allowance test in August before placing third in that venue's GI Woodward S. Sept. 2. Last seen checking in second in the GII Hagyard Fayette S. at Keeneland Oct. 28, the Todd Pletcher trainee retires with a record of 3-4-3 from 12 starts and earnings of $2,278,028.

“We're retiring the horse sound, but going forward and training him would make no sense,” Wolf said. “From the calls I've gotten last night and today, it seems like we'll find a spot for him in a regional market some time this week.”

Wolf added that he has fielded interest from farms located in California, Pennsylvania and New York.

Neolithic was originally acquired by Starlight for $460,000 as a Keeneland September yearling.