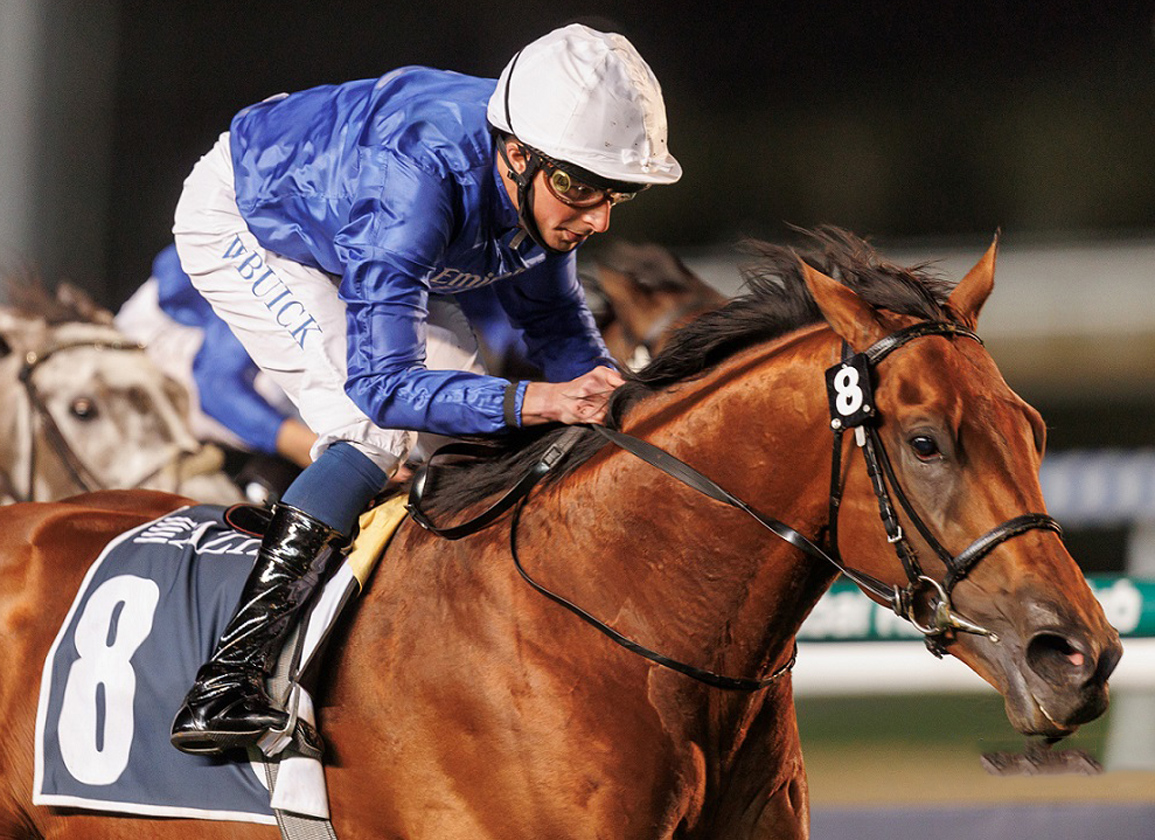 Away alertly from a low barrier, the athletic bay found himself forwardly placed and was locked away at the fence as the veteran Ajwad (GB) (Rock of Gibraltar {Ire}) was ridden for speed from gate 13 and came across the field to lead at a good gallop. Quietly ridden on the bend by William Buick while holding his position, Naval Crown was waited with in upper stretch, muscled his way into the clear with about two furlongs to race, hit the front going well at the 200-metre peg and remained comfortably in front as Story of Light (Ire) (Dark Angel {Ire}) chased him home in vain. Shadwell's Zainhom (Street Cry {Ire}) rallied from near the tail of the field to grab third.

Multiple Group 3-placed in France at two, Naval Crown was a creditable third in a single try on the dirt in the G3 UAE 2000 Guineas last February before bouncing back to take the Listed Meydan Classic going a mile over the local turf three weeks hence. Beaten less than three lengths into fourth by Poetic Flare (Ire) (Dawn Approach {Ire}) as a 50-1 chance in the G1 QIPCO 2000 Guineas in May, Naval Crown backed up to this trip to be runner-up in the G3 Jersey S. at Royal Ascot June 19 and was last seen struggling home eighth in the G1 Prix Jean Prat at Deauville July 11.

In a post-race interview, winning trainer Charlie Appleby said he'd be inclined to pass the upcoming stc1351 Turf Sprint in Saudi Arabia next month, a race won last year by Space Blues (Ire) (Dubawi {Ire}) and instead take in the 1400-metre $300,000 Ras Al Khor conditions race on Super Saturday Mar. 5 as a steppingstone to his 4-year-old season in Europe.

Naval Crown is the first foal from his dam, winner of the Listed Prix Amandine for Andre Fabre at Maisons-Laffitte in 2016 before visiting Dubawi for her first cover the following spring. Come Alive is one of five winners from eight to the races for her dam Portrayal, a listed winner and Group 3-placed in England and twice place at group level in France, including a third to the once-beaten, dual Classic winner Divine Proportions (Kingmambo) in the G2 Prix Robert Papin in 2004. Come Alive is represented by a 2-year-old Lope de Vega (Ire) filly and a yearling filly by Shamardal.