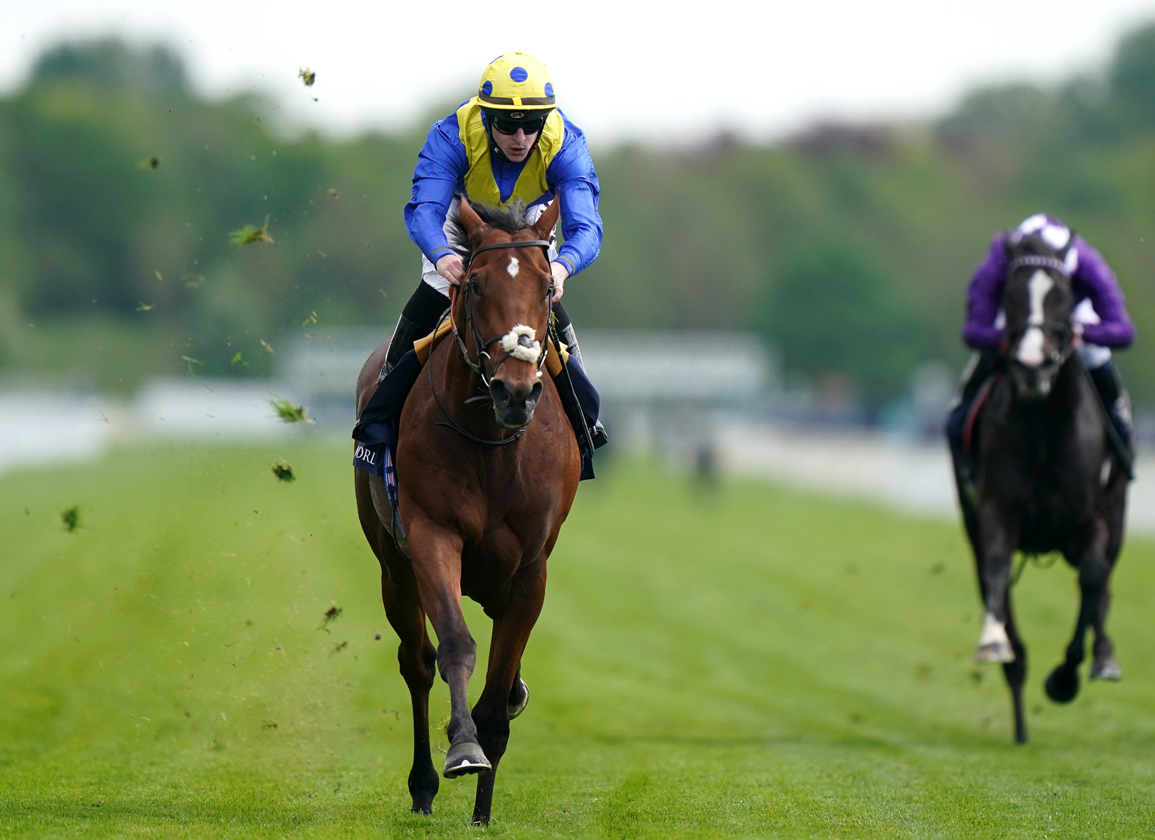 The G1 Cazoo Derby just got much more interesting after TDN Rising Star Desert Crown (GB) (Nathaniel {Ire}–Desert Berry {GB}, by Green Desert) injected much-needed adrenaline into the mix by registering an impressive success in Thursday's G2 Al Basti Equiworld Dubai Dante S. at York. Sir Michael Stoute may have tried to hide the light of Saeed Suhail's once-raced colt under a bushel, describing him as “workmanlike” at home, but the news about him had nevertheless spread like wildfire through Newmarket and now we know why. Impressive enough on his winning debut in the extended mile maiden at Nottingham in November won in recent times by Mishriff (Ire) (Make Believe {GB}) and Space Blues (Ire) (Dubawi {Ire}), he was out of the ordinary here tackling proven group winners after a glitch in his spring training.

Switched off towards the rear by Richard Kingscote, the 7-2 joint-favourite was moved to the front with minimal encouragement passing two out and despite veering right stamped his class on affairs. At the line, the Strawberry Fields Stud-bred 280,000gns Book 2 purchase had 3 1/4 lengths to spare over Royal Patronage (Fr) (Wootton Bassett {GB}), with Bluegrass (Ire) (Galileo {Ire}) offering Ballydoyle a line into the form 2 1/2 lengths further behind in third. In doing so, he drew Stoute level with the late Sir Henry Cecil on a joint-record seven winners of this prestigious Derby trial. “He is possibly still a little bit green, but he's a very relaxed individual and I don't see a mile and a half being a problem,” the winning rider said. “I moved him a little earlier than I would have ideally liked, but he was shrewd. I was in front plenty long enough and we were just rolling around a little in the finish. He's had a little shout on the way to the start, so you'd like to think there could be more to come.”

Following on from Galileo's rampant week, his son Nathaniel has helped to put the Derby even more out of the grasp of any sire not directly imbued with his rarefied genes. Either the sire or sire's sire of the top seven quoted at present, the late Coolmore great could come to dominate the 2022 Blue Riband like no other year and if it is Desert Crown on top of them all it will surprise nobody after this. Not even his trainer, who has made choosing his words carefully an art form, couldn't water this one down. “He surprised me actually,” he said. “You'd have to be very happy with that performance–he was very professional, as it's only his second race. I wasn't confident, as we only just got him up to a race after a minor setback in February. We'll find out if he stays at Epsom, but I'd be very hopeful it wouldn't be a problem. His temperament isn't a problem, he's a very relaxed horse.”

“He has to go there with a very sound chance. He is a beautifully-balanced horse, so hopefully he'll handle that aspect as well,” Stoute added. “That was a big leap up. He was impressive in his maiden, but as he got behind with the hold-up and behind schedule we had to do what we did and he didn't let me down. Other than Workforce, all my Dante horses had had a previous race early in the season so that was very encouraging.”

Royal Patronage is not certain to go to Epsom according to Mark Johnston. “You're never delighted with second, but it's nice to be back in the game,” he said. “I'd like to watch it back, as just as we started to make our move it got a little bit tight in front of him. He wasn't exactly checked, but maybe the winner got a run on us, I'm not sure. We ran in a mile in the Guineas, having previously planned to come here and go to Epsom. We talked ourselves into a mile for the Guineas and the one thing we know now is that's wrong. We've got lots to think about regarding where he goes next. It could be France, but it could still be Epsom.”

The winner's dam, who captured a mile maiden on Lingfield's Polytrack, was bred exclusively to Archipenko until Desert Crown, with her best performer to date being the G3 Premier Cup winner Archie McKellar (GB), known in Hong Kong as Flying Thunder. Her 2018 colt Cu Chulainn (GB) was a 425,000gns purchase by the Hong Kong Jockey Club at the Book 2 Sale as a result of his full-brother's exploits, but failed to make his mark for Brian Meehan.

This is a Juddmonte family, with the third dam Binary (GB) (Rainbow Quest) responsible for the operation's prolific producer Binche (Woodman). She is responsible for the G1 Prince of Wales's S. hero Byword (GB) (Peintre Celebre) and the four-times grade I-winning Proviso (GB) (Dansili {GB}). When bred to Galileo's Frankel (GB), she threw the G2 Prix Eugene Adam scorer Finche (GB) and the recent Listed Prix Lord Seymour winner Baratti (GB). Desert Berry's 2-year-old filly is by Al Kazeem (GB), while she also has a yearling son of Study of Man (Ire).

👑 Heavy is the head that wears the crown

Desert Crown stamps his mark on the Derby picture with a brilliant performance in the @ABE_Dubai Dante Stakes to maintain his unbeaten record & provide Sir Michael Stoute with a seventh win in the contest @RKingscote | @yorkracecourse pic.twitter.com/2bpokKagZw