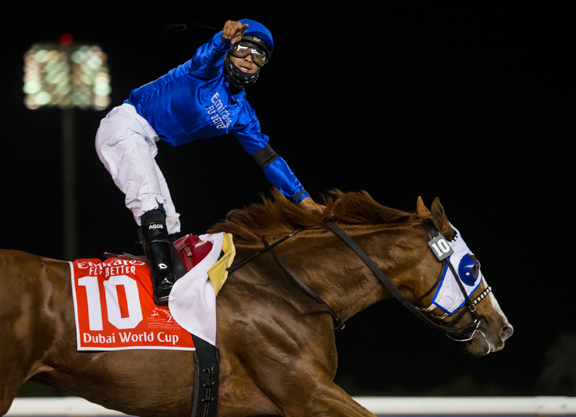 Mystic Guide (Ghostzapper), who kick-started his career as a second-out 'TDN Rising Star' and most recently won the $12-million G1 Dubai World Cup at the end of March, is preparing for a late summer and fall campaign. After having spent the last few weeks at trainer Michael Stidham's Keeneland barn, he will ship to Maryland's Fair Hill Training Center this week to resume serious training.

“Since he's been back, I've been shocked and amazed with how well he's handled that whole experience, from all the traveling to the stress of the race,” said Stidham. “Maybe he lightened up a little bit, visibly, but we got back to the track and back in his regular routine, he fell right back into his old self. He thrived over there in Dubai and the whole thing didn't really affect him. I almost worked him this week, but there's really nothing for him race-wise until July, so we'll ship him back to Fair Hill and then put him back into a work pattern.”

Stidham indicated the Godolphin homebred may target Belmont's July 3 GII Suburban H. as a return engagement, but several other spots are under consideration as well. The major end-of-season goal is the Nov. 6 GI Breeders' Cup Classic.

“We're working backwards from the Breeders' Cup at this point and while the races leading up are important, the most important is the Classic,” continued Stidham. “That's where they crown the champion and that's our goal.”

In addition to the Dubai World Cup, Mystic Guide won the GIII Razorback H. in his 2021 debut. His sophomore campaign last year included a win in the GII Peter Pan S. and placings in both the GI Jockey Club Gold Cup and the GIII Peter Pan S. The lightly raced colt has never been off the board, with four wins from eight starts. The Dubai World Cup marked Stidham's first start outside the U.S.

“Personally, the biggest thing for me was how many people were truly and honestly happy for [assistant trainer] Hilary [Pridham] and I,” he said. “When you have so many peers who've watched you all along your career who truly wanted you to win such a big race–that just really made me feel good about the whole thing. Obviously, as I said when I was over there, finally getting my chance on the world stage and winning was just amazing.”