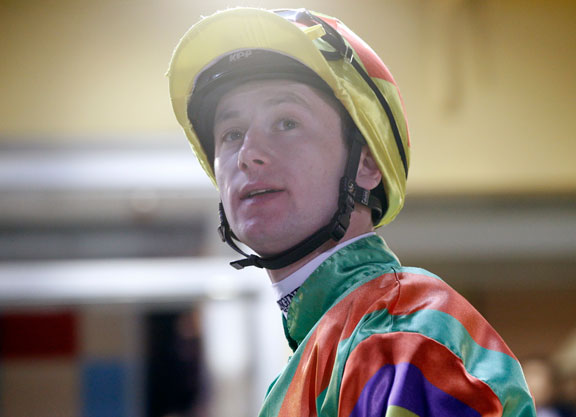 Champion jockey Oisin Murphy has said he will “fight to clear his name” after it was revealed on Thursday that he had tested positive for metabolites of cocaine at Chantilly on July 19, the card during which he partnered The Lir Jet (Ire) (Prince of Lir {Ire}) to finish second in the G2 Prix Robert Papin. Murphy said he has “never taken cocaine.” If found guilty, he could face a lengthy ban from the saddle; Frankie Dettori was sidelined six months in 2012 after testing positive for cocaine in France-he admitted to using the drug–while Rab Havlin failed a drug test in that country in 2017, resulting in nearly 10 months out of the saddle.

Murphy was informed of the positive on Aug. 19, at which time he organized a hair sample test that came back negative. Those results have been shared with France Galop.

A statement from Murphy read, “I have never taken cocaine in my life and will fight to clear my name. I want to thank those who are supporting me and in the meantime I want to keep riding winners and focus on my career.”

Speaking on Racing TV later on Thursday, Murphy said, “I had to release a statement today as the story had got round, but it is a weight off my shoulders. I'd been riding to the best of my ability and had a great week last week, but something needed to be said today–and I'm pleased it's out there.

“People will examine every ride now, and if I give one a bad ride, they'll probably say it's because of this, but I have a brilliant support team and I am innocent. I think those closest to me believe in my innocence, so I've been able to push it out of my head.

“I've got to trust in France Galop and try to carry on as normal. A lot of important things are going on in the world at the moment, and this is crucial in my career, but it's out of my control. I don't come into contact with drugs, I didn't ever expect to hear from France Galop, BHA or wherever else I ride around the world. I don't even take pain killers–I take an inhaler, and that's about it. I don't know the next steps. I'll have to hear back from France Galop, which could take a few weeks. In an ideal world the headlines wouldn't have come out today– we could have waited until we had a clearer picture–but now we have to wait on the 'B' sample.”