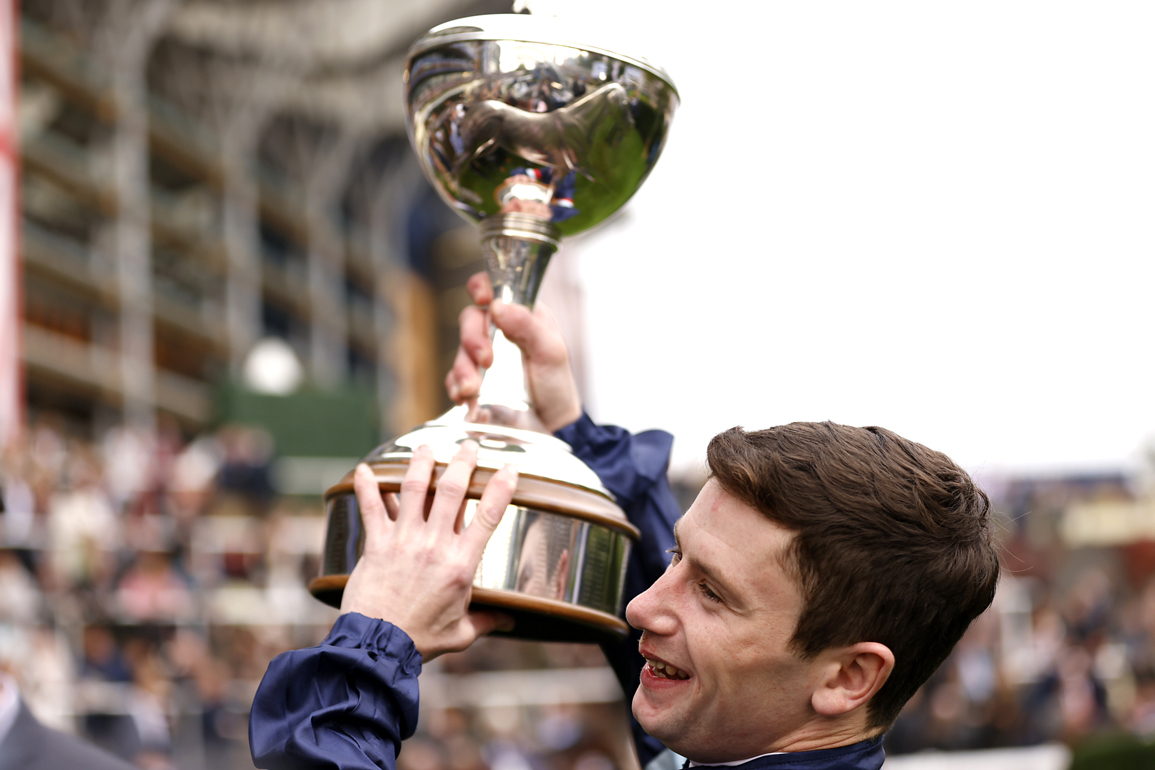 The British jockeys' championship came right down to the wire in a tight race between Oisin Murphy and William Buick in recent weeks, but despite Buick's victory aboard Creative Force on Champions Day, Murphy prevailed by two victories to earn his third consecutive champion jockey title.

“I'm over the moon and thrilled to get it across the line,” Murphy said. “Thank you to my family and everyone–I've got a massive support group. The last week I've had a lot of people on my side. Frankie Dettori has been there every day making sure my spirits are up and I was riding off instinct as normal which is key. You need to make every ride count and I was running out of opportunities. I held it together thankfully in the end.”

It has not been a straightforward few weeks for Murphy, who suffered a face injury in a nasty paddock incident at Salisbury and later failed a breathalyser test at Newmarket after reports of an altercation in a local pub the night prior. Murphy addressed the latter, saying, “I think everyone knows that I am human and quite honest. But I need to do better and I don't want any issues surrounding my career. Let's just focus on riding winners and hopefully winning another jockeys' championship. I'm 26-years-old so I think I will keep trying for a few more years. Horses are my life and I'm never happier than when I'm on the back of a horse. I've bought my showjumpers and they keep me busy too. Sheikh Fahad and Qatar Racing have a few horses to go to America for the Breeders' Cup. There are lots of international races in Hong Kong and Japan coming up so I will be busy.

“William was getting a lot more support than I was in the last couple of weeks and the likes of Ed Walker, Hughie Morrison, Andrew Balding and Saeed bin Suroor have been amazing, so thanks to them.”

Murphy is retained rider to Qatar Racing, and Sheikh Fahad spoke out in support of the jockey on Racing TV, saying, “Oisin has really felt it this time, there's no question about it. He felt it at the end of last season as well when he was over at the Breeders' Cup and William was eating into his lead in dramatic fashion. It's been a really high pressure and tense end to the season. Thank God it ends today and not at Doncaster in a few weeks' time as that would drag it out even more.

“Oisin is a young man. We've known him since he was 17 and he's still growing and developing as a man. Clearly there are things that have happened in recent times that he has regrets about and will work hard to put right. I have no doubt that when the pressure of Champions Day is out of the way and he can breathe and regroup, that there will be changes made to his lifestyle and he's going to look very hard at that.

“Nobody can have any idea what it's like being in this cauldron unless they've actually been there themselves. I spoke to Kevin Darley the other day and he said when he sat down at the end of his championship-winning season, he literally lost two days of his life he was so exhausted. He couldn't even remember what happened in that time. William is going to be exhausted as well. Oisin is exhausted and puts himself under huge pressure.

“We all make mistakes. It's been difficult and obviously it's disappointing for everybody that the stories in the press have detracted from what is an absolutely unbelievable achievement–to win three championships on the bounce from such an early start. We're incredibly proud of him. He's very much part of our family and whatever help Oisin needs he'll get.”

“It's really nice to be crowned champion apprentice,” Ghiani said. “It's a dream come true and I'm really thankful to all the people that have helped me along this journey. I'll be smiling forever now.”

The 22-year-old Ghiani, whose highlight this season came when steering the Saeed bin Suroor-trained Real World to a victory in Royal Ascot's Royal Hunt Cup, said he doesn't come from a racing family but decided he wanted to be a jockey at age 15.

“My family have a restaurant,” he explained. “None of them have been with horses, apart from my grandfather's grandfather. We found out last week that he used to ride horses.

Ghiani, who enrolled in the British Racing School and joined Luca Cumani's yard at age 16, said he “just wants to ride as many winners as I can.”