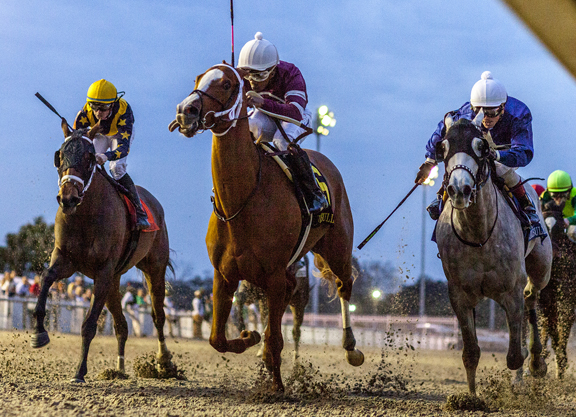 Finite had to fight for it, but her class saw her through on the day as she gutted out a narrow victory over pacesetting Ursula while earning 10 more qualifying points for the GI Kentucky Oaks. Three wide out of the stretch for the first time, the homebred filly continued to cover ground on the second turn and was three and four wide off the final corner. With Ricardo Santana, Jr., throwing everything he had at her, she eyeballed the longtime leader with a furlong to race and clawed that one back in the dying strides for not only her fourth consecutive victory, but also the 1000th black-type win in the Hall of Fame career of trainer Steve Asmussen.

Runner-up in a pair of Saratoga sprint maidens to begin her career, Finite graduated at Kentucky Downs before closing the season with tallies in the Oct. 27 Rags To Riches S. and GII Golden Rod S. at Churchill.

The winner’s dam provided Asmussen with two more of his stakes wins, many of which have come for the Winchell family. In addition to Asmussen-trained Reride, Remit is responsible for a 2-year-old full-sister to Reride and a yearling colt by Gun Runner. Remit, who is a full-sister to MGSW and promising young sire Tapiture and to last year’s GIII Super Derby S. winner Rotation–also Asmussen pupils–was bred back to Gun Runner.