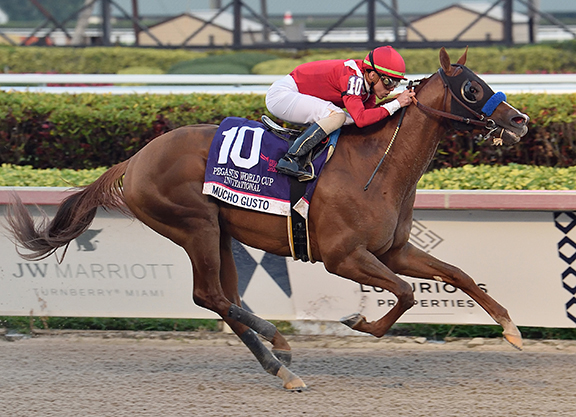 Mucho Gusto (Mucho Macho Man–Itsagiantcauseway, by Giant's Causeway), winner of last year's GI Pegasus World Cup Invitational, has been retired due to a soft-tissue injury, according to his trainer, Bob Baffert.

“He came up with a minor soft tissue injury that will knock him out of the Pegasus and Saudi Cup,” said Baffert.

The trainer said that the issue had just arisen today and that no stallion deal had been discussed yet.

The Pegasus was one of five graded races won by the 5-year-old chestnut, who also captured the GIII Robert B. Lewis S., GIII Lazaro Barrera S., GIII Affirmed S., and GIII Bob Hope S. He was second in the GI TVG Haskell Invitational and the GI Los Alamitos Cash Call Futurity and third in the GI Runhappy Travers S. He was a graded stakes winner at two, three and four.

Mucho Gusto, purchased by Michael Lund Petersen for $625,000 at the 2018 Fasig-Tipton Midlantic 2-Year-Olds in Training Sale, was acquired privately by Prince Faisal Bin Khaled following the 2019 Oklahoma Derby and captured last year's Pegasus in his first start for his new owner. He followed that victory with a fourth-place effort in the inaugural Saudi Cup last February. Most recently fourth in the Dec. 26 GII San Antonio S., he earned just shy of $4 million on the racetrack, finishing up his career with earnings of $3,953,800.

“We are disappointed because he was a barn favorite,” said Baffert. “He ran in some exciting races, and winning the Pegasus was incredible. Turning for home, he looked like he was going to win the Saudi Cup,” said Baffert. “He gave Michael Lund Petersen one of his biggest thrills when he ran second in the Haskell. We freshened him up, gave him the whole summer off to have him ready for the Pegasus and the Saudi Cup and then this thing happened. It was really disappointing, because I was really excited about him this year. He put up some huge performances.”