Mourning a Kind of Immortality 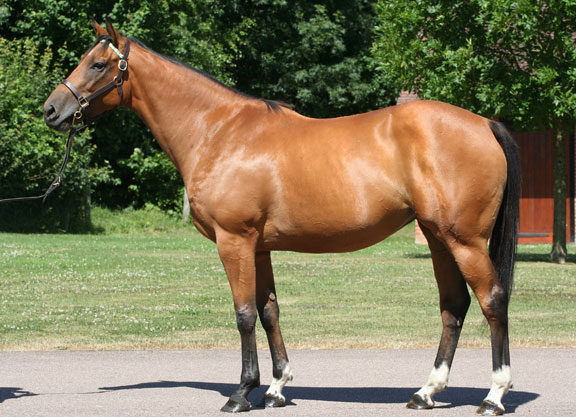 Thanks to advances in obstetrics, our own species is blessed to no longer confront quite so frequently the awful paradox that routinely confronted our ancestors: the death of a mother, as the cost of new life. And, of course, even a Thoroughbred as precious and cherished as Kind (Ire) (Danehill) is ultimately always livestock, prone to the kind of mishaps that tend to school the stockman in understatement whether facing triumph or disaster. But the consolation that we can seek, on their behalf, is the same: legacy.

Undoubtedly there will have been Victorian scientists who owed their own existence to the loss of a mother. But sometimes that cruel trade-off might be redressed by another: having survived, the infant could be raised to contribute to the sum of human knowledge; could even improve our understanding of why these things happen, and how to make them happen less often.

A similar calculation applies to our quest for greatness in Thoroughbreds. We know that these animals are fragile, that their very existence—being predicated on exercise, competition and breeding—will inevitably expose them to a degree of risk. But we also know that we can proceed with a clear conscience, when our management of the breed can yield a champion as glorious as Frankel (GB). So while there will doubtless be grief among those who have tended this venerable mare for many years, they must console themselves that her service to the breed amply redeems the relatively marginal risk it entailed.

That comfort, moreover, will be shared by all those who lavish no less care—in all weathers, 365 days a year—on Thoroughbreds that contribute nothing to the breed, other than a hint as to the kind of breeding formula to avoid in future. Because all these endeavours share the same purpose; and we all need the example of a freak like Frankel to make sense of the collective enterprise.

Many of us will have shared the same immediate reaction, on hearing that Kind had succumbed to complications arising from the delivery of a Kingman (GB) colt last week: how poignant, that one of the pillars of this extraordinary breeding empire should have crumbled so soon after the loss of its founder. And not only how poignant but also, on some inexpressible level, how apt. But you can be sure that Prince Khalid Abdullah himself would be anxious to share the credit, for Kind, with those who had cultivated her family with the same far-sighted principles that characterised his own intervention.

The Prince welcomed his first homebred winner in 1982, a thrill that sustained a period of around 15 years during which—with the particular assistance of James Delahooke—he targeted well-bred, well-shaped females from various sources: at auction, both as yearlings and broodmares; in private deals with other breeders; and absorbing such carefully curated herds as came with Belair Farm and Ferrans Stud.

Then, in 1983, came the mares kept by John Hay 'Jock' Whitney at Mount Coote Stud in Ireland. These famously included Rockfest, the granddam of Kind. But the line had passed relatively briefly through Whitney's hands, Jeremy Tree having bought him Rockfest's dam Rock Garden as a yearling in 1971. (Tree had meanwhile become The Prince's first trainer and was instrumental in securing the Whitney herd.) Kind's family had much deeper roots in the Oxfordshire stud of Lady Wyfold, whose father-in-law had bought a pregnant mare at a dispersal sale in Berkshire, in the last weeks of peace before World War I. The filly she delivered in the spring of 1915 was the first in a chain of half a dozen Sarsden graduates extending to Rock Garden.

These included the 1942 Queen Mary winner Samovar, who incidentally produced two highly accomplished siblings in Zabara (GB) (1000 Guineas) and Rustam (GB), a sharp juvenile who stood at Mount Coote for a while. Samovar is the sixth dam of Kind.

Rock Garden, a Chepstow maiden winner, had delivered Rockfest after Whitney sent her to his homeland for a date with Stage Door Johnny, whose success in the 1968 Belmont S. defused one of the most explosive Triple Crown series in history. That's another story, but I think Stage Door Johnny is close enough in Frankel's pedigree to be credited with some role in the hard-running style we often see in his stock. He's a tremendously wholesome influence, for sure: his sire Prince John was by Princequillo and proved a particularly effective broodmare sire; and his dam was by Ballymoss (GB), that deep well of stamina.

Rock Garden was a fairly mediocre producer, Rockfest proving the most distinguished of her foals as runner-up in the G3 Lingfield Oaks Trial. In turn, Rockfest produced her only really worthwhile dividend as a broodmare in Rainbow Lake (GB). Being by a staying influence as thorough as Rainbow Quest (GB), unsurprisingly Rainbow Lake's keynote performance came with an emphasis on stamina, winning the G3 Lancashire Oaks by seven lengths. That qualified her as hot favourite for the G1 Yorkshire Oaks, but she ran poorly then and in her only subsequent start.

Rainbow Lake, of course, became the dam of Kind—whose own strengths, as a prolific sprinter trained by Tree's Beckhampton successor Roger Charlton—tell us much about the astounding capacities of her sire Danehill.

Frankel famously combines those twin highways to the breed-shaping Northern Dancer, Sadler's Wells and Danzig, through their most important respective sons in Galileo and Danehill. When Rainbow Lake was sent to Sadler's Wells, in 1999, she duly came up with a top-class middle-distance operator in Powerscourt (Ire), whose sustained bid for a glamorous prize over 10 furlongs eventually paid off in the GI Arlington Million but who stayed well enough to have closed to within a length of Vinnie Roe (Ire) (Definite Article {GB}) in the G1 Irish St Leger. For her next cover, Rainbow Lake went to Danehill and came up with this 103-rated, stakes-winning sprinter, Kind.

Sure enough, when Kind was herself sent for consecutive coverings by Sadler's Wells, Galileo and then again Galileo, the idea was that she might come up with the optimal equilibrium between speed and stamina. As aspirations go, pretty hackneyed. The results, as we all know, were not quite so standard.

Yes, the Sadler's Wells earned his place in the Derby by making all the Lingfield Trial: but Bullet Train (GB) bombed out at Epsom, and Sir Henry eventually decided that since all he could do was keep going, he could serve his kid brother as pacemaker. He performed this role dutifully in the last six starts of his career.

Frankel had by then become the closest many of us have seen to the grail, that elusive blend sought by so many breeders who usually end up with slow sprinters or short-winded stayers. I have always said that the way he carried his speed, once he had calmed down, would have made Frankel no less a legend on dirt. It's a shame that circumstances did not permit that experiment—nor indeed much else in the way of adventure, with maybe a crack at the Arc instead—once he had established his dominion on home soil. As a stallion, however, he has been a conduit for the trademark assets of Galileo (let-me-run-through-that-wall) to the extent of winning a Leger.

So it's been fascinating to follow Noble Mission (GB), his brother, both on the track and at stud. He never had Frankel's brilliance, but showed much of his indomitability in winning three Group 1s—notably when bowing out, just like his brother, with a slugfest in the Ascot mire. Sadly, things have not worked out for the Bluegrass farm that tried to live up to his name, even though he produced a Kentucky Derby runner-up at the first attempt. It proved as hopeless a mission as it was a noble one, trying to overcome the local commercial prejudice against turf, and the horse was recently exported to Japan. In their mutual aversion to bloodlines tested on each other's preferred surfaces, American and European breeders are vying with each other in myopia. And in amnesia, too, looking at the game-changing traffic of years past. As it is, the Japanese are picking up the pieces, and will have the last laugh.

Juddmonte did subsequently attempt to repeat the kind of twist that had paid off with Rainbow Lake, giving Kind a couple of home-farm dates with a faster stallion in Oasis Dream (GB). This was around the time Oasis Dream came up with his decoy Midday (GB), however, so possibly that was a fairly equivocal gamble. Anyhow the results were a decent handicapper at a mile and, a priceless bequest to the broodmare band, a dual stakes-winning sprinter in Joyeuse (GB).

In fairness, it's not as though Danehill was simply a conduit of Danzig speed. Certainly his versatility looks commercially vital to Frankel, given all those stamina influences loaded elsewhere: Galileo, Rainbow Quest, Stage Door Johnny. Actually it may be that Frankel tempered these with some of the dash concentrated in all those Sarsden House mares, who were by largely forgotten English stallions. Rock Garden, for instance, was by the miler Roan Rocket (GB); while her granddam was by a July Cup winner (and, as already noted, out of a Queen Mary winner).

A long game, this, after all. Genetic legacy is about accretion; about noticing the pale glimmers rising and fading somewhere within the dark tangle, and patiently working those strands closer to the surface. Some people have talked of Kind as though she were some kind of token in the nicking manual (“insert Danehill mare here”). That view is too fatuous to dignify with attention on the day when we mourn her passage from flesh and blood to a vicarious afterlife, through Frankel, Joyeuse and others, within the binding of the Stud Book.

It does sound as though age had, in recent years, increasingly recalled Kind to her mortal limitations. But who knows? Perhaps her orphaned colt will thrive for a foster mare, and someday extend the legacy anew. Regardless, the same, natural processes of maternity that have now taken her away have long since guaranteed her immortality.