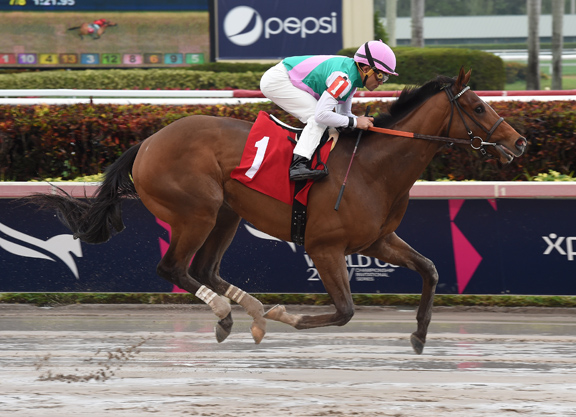 When you think of trainers and brilliantly fast, precocious young horses, Bill Mott is not someone who normally comes to mind. But on Saturday at Gulfstream, Mott unleashed a first time starter named Hidden Scroll (Hard Spun), who not only won the one-mile maiden special weight race by 14 lengths, but registered a 104 Beyer Figure that is higher than any member of his crop has run to date.

His running time for the one-mile race run in the slop was 1:34.82. Five races later, older horses covered the same distance in 1:36.22 in the GIII Fred W. Hooper S.

“I am very excited about him,” Mott said. “I think he is a very nice colt. The more I watched him and the more I was around him, the more I liked him.”

It used to be that when a 3-year-old colt makes his debut in late January, the connections would normally rule out a start in the GI Kentucky Derby, believing it was asking too much of a horse in too little an amount of time. But the rules changed last year when Justify (Scat Daddy), who didn't make his first start until Feb. 18, not only won the Kentucky Derby but swept the Triple Crown. While Mott is not normally as aggressive with his young horses as Justify's trainer Bob Baffert, he wouldn't rule out a Derby appearance by Hidden Scroll.

“We made the nomination for the Triple Crown before he ran, so its not something we just came up with after the race,” Mott said. “Even if we don't make the Derby, you want to be eligible for the Preakness and Belmont and, for a horse like this, it may turn out that he's better suited for the Preakness than the Derby.”

Mott said his immediate focus will be on where to start Hidden Scroll next. He would normally prefer to go into an allowance race, but says there are none in the Gulfstream condition book that fit what would be a practical schedule. For that reason Hidden Scroll's next race will likely come in stakes company.

“We've looked at the schedule and know when all the stakes races are,” he said. “New Orleans, Hot Springs, Tampa, Gulfstream, we know when they are available. We'll see when the horse is ready and go from there.”

Mott admitted the next race will be a big test and give him a better indication of whether not it would be prudent to try to make the Kentucky Derby.

Owned by Juddmonte Farms, Hidden Scroll was a late arrival to the Mott barn, showing up at Churchill in the summer. Mott had hoped to run him there during the short September meet, but a freak accident kept him sidelined. He said the horse was spooked by a truck while walking the shedrow, reared up and kicked a fuse box in the barn. He injured a hock and needed time.

Mott said he was confident going into Saturday's race, but even he was surprised by how impressive Hidden Scroll was.

“We liked him and I'm not surprised that he won,” he said. “But you never know when you're going to see a performance like that. Winning by 14 and being eased up, and it looked like that there were a couple of horses in behind him that were okay. It didn't look like a bad race by any means.”

At the same time, Mott is realistic. He knows that what Justify did last year, becoming the first horse since 1882 to win the Derby without having a start as a 2-year-old, was a rare and exceptional feat. This would not only be a case of lightning striking twice, but striking twice within a very short period of time.

“I hate to be naysayer, but the likelihood of that happening two years in a row is probably pretty remote,” he said.

The Hall of Fame trainer has never won the Derby and has had only a handful of candidates for the race over the years. He tends to excel in other areas. But this year he could be as big a player on the road to Churchill Downs as a Bob Baffert or a Todd Pletcher.

“I have no doubt that Hidden Scroll is a really nice horse. But I am also fortunate enough to have another really nice colt for Juddmonte, a Tapit colt named Tacitus (Tapit),” he said. “He's coming back and will be ready to run pretty soon. Last November, he was our Derby hope.”

Tacitus broke his maiden in his second career start at Aqueduct in November. Mott also said that Mucho (Blame), who has not run since finishing second in the GI Hopeful S., is doing well and will make his 3-year-old debut shortly. He also has a horse he is high on in Country House (Lookin at Lucky), who won a Jan. 17 maiden race at Gulfstream.

This is something new for Mott, having to juggle schedules and find spots for a number of potential Derby starters. He has prospects and he has what may be a super prospect in Hidden Scroll. For the Mott stable, it should be an interesting and exciting next few months.