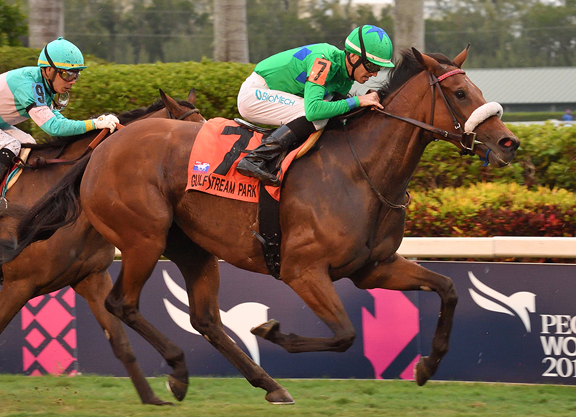 When last she was spotted at a racetrack, Takaya Shimakawa’s Si Que Es Buena (Arg) (Equal Stripes) was running her stateside record to two wins from three appearances with a 15-2 upset of favored Santa Monica (GB) (Mastercraftsman {Ire}) in the GIII La Prevoyante S. on the Pegasus World Cup undercard at Gulfstream Park Jan. 26. The 6-year-old makes her return to the races in Saturday’s GI E. P. Taylor S. at Woodbine, a move that can be viewed in a positive light under the circumstances.

A Group 3 winner in Peru in May 2018, Si Que Es Buena made a favorable impression in the 11-furlong GIII Long Island S. at Aqueduct last November, covering her final three furlongs in :35.11 to beaten a length for all of it in fourth. The bay cut back to 9 1/2 furlongs and handed Holy Helena (Ghostzapper) a neck defeat in the Dec. 29 Via Borghese S. before getting through the soggy Gulfstream turf nicely to take the La Prevoyante by a length. Trainer Graham Motion has yet to win the E. P. Taylor, but strikes with 23% of his runners returning from a six-month absence, according to DRF Formulator.

Sheikh Mohammed Obaid al Maktoum took down last year’s E. P. Taylor with then 3-year-old filly Sheikha Reika (Fr) (Shamardal) and the owner is represented here by homebred Imperial Charm (GB) (Dubawi {Ire}). Just a maiden winner from eight trips to the post, the bay was a close fourth in the G1 Poule d’Essai des Pouliches May 12 and improved by one spot in the G1 Prix Saint Alary two weeks later. She was the beaten favorite when third in the June 29 G3 Prix Chloe and when trying her elders for the first time in the Listed Prix de la Cochere at ParisLongchamp Sept. 5. Andrea Atzeni, who was aboard Sheikha Reika last year, has the call.

Starship Jubilee (Indy Wind) has a local record of 12-5-1-1 and has recorded her two best career Beyers in winning back-to-back renewals of the GII Canadian S., including this year’s event Sept. 14. The former claimer was fourth to Sheikha Reika last year after setting the pace into the final quarter-mile.

Joseph O’Brien makes his Woodbine debut with Red Tea (GB) (Sakhee), the easy two-length winner of the G2 Kilboy Estate S. at the Curragh July 21 ahead of a longshot third to Coronet (Ire) (Dubawi {Ire}) in the G1 Prix Jean Romanet at Deauville Aug. 18.