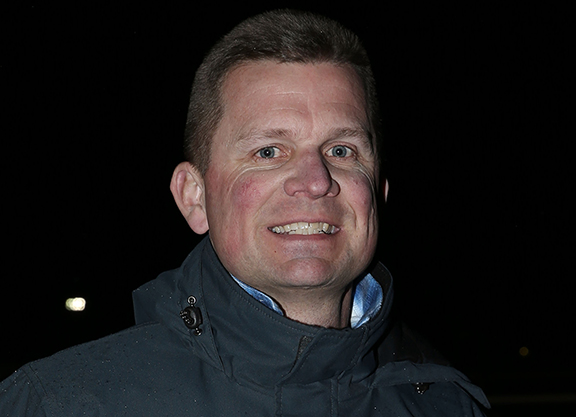 Trainer William Morey picked up three for his stable while shopping the 2-year-old sales in Ocala last spring. Two of them, led by the streaking GIII Jeff Ruby Steaks-bound Hush of a Storm (Creative Cause), will compete on Saturday's loaded program at Turfway Park.

“Two have won stakes, and, of course, the other filly hasn't made the races,” Morey said. “We've had some bitter and sweet, but lots of sweet along the way.”

A well-beaten eighth in his Churchill debut last November, Hush of a Storm is a perfect three-for-three over the Turfway synthetic since, including a good-looking, come-from-behind win in the local prep John Battaglia Memorial S. Feb. 26 (video). The field that day included the re-opposing GISW Gretzky the Great (Nyquist).

Bred by Berkshire Stud, Hush of a Storm is the first foal out of the winning Flatter mare Hush Now, a full-sister to MSW & MGSP Brigand and a half-sister to SW Sky Music (Sky Mesa).

The New York-bred completed his Jeff Ruby preparations with a five-furlong breeze in 1:02.60 (38/46) at Turfway last Saturday.

Morey will also saddle Sandin Syndicate Stable's Pico d'Oro (Curlin), a $255,000 OBS March acquisition (:21 1/5; consigned by Eddie Woods), in the $65,000 Animal Kingdom S. on the Jeff Ruby undercard. Last year's Runhappy Juvenile S. winner cuts back to 6 1/2 furlongs after flashing speed and tiring to eighth behind his stablemate in the Battaglia. He was a close third as the favorite in Aqueduct's Jimmy Winkfield S. two back.

Other entrants on Saturday's Turfway card for Morey include: Queen of God (Paynter) in the Latonia S. and Visitant (Ghostzapper) in the Kentucky Cup Classic.

“Tough little horse, but not quite a route horse,” Morey said of Pico d'Oro. “Pico's got a big heart and a great stride. He's a hard trier.”

The son of the late, CTBA Hall of Fame trainer William J. Morey, Jr. relocated to the bluegrass with his wife Elizabeth two years ago from his native California. Highlights from his 1,700-plus career victories include wins in 2018 by Ollie's Candy in the GII Summertime Oaks and Coniah in the GIII Las Cienegas S.

“I worked for dad [as an assistant] through high school and college,” Morey said. “I went on my own in '01. Surprisingly enough, it's been 20-21 years now all of sudden. It's crazy how time flies. I can remember the days working for him.”

He added with a laugh, “The good days and the bad days, that's for sure.”

Morey trains approximately 30 head, split currently between Turfway and Keeneland with plans to head to Churchill later this spring. The 46-year-old will also have a division at Del Mar this summer.

“We're enjoying our time and our life here in Kentucky,” Morey said. “It's a beautiful place to live and to train. Hoping to continue to get better and better horses. We've got some good ones on the way.”

One of those in the pipeline to keep an eye on–a colt from the first crop of the much buzzed-about MGISW Practical Joke–was selected by Morey on behalf of Gerry Sandin's aforementioned operation for $210,000 at last week's OBS March Sale.

Consigned by Eddie Woods, Agent VIII, as Hip 113, the son of the multiple stakes-winning City Zip mare Mystic City breezed a quarter in :21 1/5 at the under-tack show.

“He's got that Classic, Derby colt look to him,” Morey said. “Let's hope he's that good. But that's the look he has. And that's the look that sells. That was the same kind of look I saw last year in Hush of a Storm.”