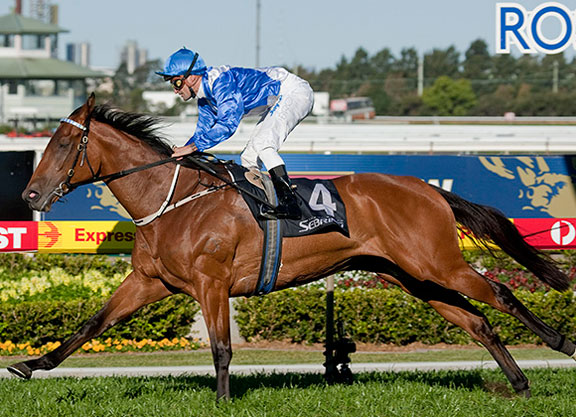 More Sundays (Aus) (Fastnet Rock {Aus}), the second foal and first colt out of the eight-time Group 1 winner More Joyous (NZ) (More Than Ready), won his first trial at Rosehill on Friday. The Bjorn Baker-trained 2-year-old had to be hustled a touch out of the barriers by Jason Collett but soon settled into a prominent third on the fence. Working his way up to join the front runner as they turned for home, More Sundays took the lead inside the final 100 metres under a handride and was a comfortable three-quarter length winner (video). The 900 metre heat was timed in :53.70 over the soft going.

“He's a lovely big horse and we're really happy with the way he's come through this preparation,” Baker told Racing.com. “We might give him a little break now and then get him back to trial at the end of January and look at some of the big 2-year-old races with him.”

“I am really lucky to get a well-bred horse like that in the stable so it's exciting,” he said. “He's got a very good constitution and we are continually learning about him but he has got a lot of speed. It was his first trial away from home and it's certainly encouraging to see him perform like that. Horses like him give you hope that's for sure.”

More Joyous's first foal is the Frankel (GB) filly Woman (Aus), the winner of her lone career start on Sept. 13 for Gai Waterhouse and Adrian Bott. More Joyous was barren in 2016 and produced a Snitzel (Aus) colt this season.