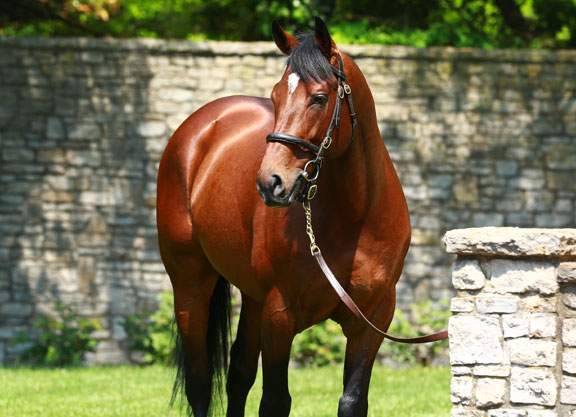 The ruthless nature of the American bloodstock market's trend toward unproven sires combined with an increased demand in developing nations for international stock has resulted in a worrying mass exodus of middle market stallions from Kentucky in recent years.

WinStar Farm sold the regally bred Take Charge Indy to South Korea in 2016 six weeks before his first crop turned two, with his support particularly in the sales ring having waned, but thanks to a clause in the contract WinStar was able to buy him back and the son of A.P. Indy has returned to Kentucky for 2020 after leaving 12 stakes winners from his first three crops to race.

WinStar also sold a pair of Group 1 sires to Turkey last year: Bodemeister and Super Saver. Bodemeister had provided the GI Kentucky Derby winner Always Dreaming and Grade II winner American Anthem from his first crop, while Super Saver flew the gates with three Grade I winners in his initial crop: champion sprinter Runhappy, promising young sire Competitive Edge and the filly Embellish The Lace. Such explosive starts must mean that these sires maintain some kind of genetic predisposition to brilliance that will one day again shine through. Dips in performance in the cut-throat market they operated in, however, didn't allow them the chance to prove it.

This a worrying trend in a market where little is given a chance outside of first-season sires and proven, consistent Grade I sires. And the stallion farms can barely be blamed for accepting lucrative deals. Last year, two Kentucky Derby winners packed their bags to Japan: the solid winner-getter Animal Kingdom and the unproven California Chrome, whose first crop has just turned two.

In the case of Japan, it is likely a matter of bolstering its stallion ranks after the loss of two of its greatest breed shapers, Deep Impact and King Kamehameha, last summer. It was announced weeks after Deep Impact and King Kamehameha's deaths that the subsequently crowned American Horse of the Year Bricks and Mortar would stand at Shadai Farm. Sixteen months ago, Declaration Of War-who was often likened to Bricks and Mortar's sire, Giant's Causeway–was shipped off from Ashford Stud to Shizunai Stallion Station.

Declaration Of War was sold just shy of three months before his first crop finished their 3-year-old campaigns, despite a first-crop Classic winner in the G1 Poule d'Essai des Poulains victor Olmedo (Fr). After a blockbuster year in Australia headed by the winners of the G1 Melbourne Cup, G1 Victoria Derby and G1 Queensland Oaks, Declaration Of War now has a shot at picking up a Classic on a third continent with the American 3-year-old colt Silver Prospector, who franked his victory in last fall's GII Kentucky Jockey Club S. with a win in last weekend's GIII Southwest S. at the Fair Grounds.

Like last year's GI Preakness S. winner War of Will, by Declaration Of War's sire War Front, Silver Prospector was initially pitched onto the turf by trainer Steve Asmussen but failed to shine until he was switched to the dirt. After going winless in his first three tries on the grass, Silver Prospector-who is out of the Tapit mare Tap Softly-broke his maiden by two lengths in his dirt debut at Keeneland last fall. He was third stepped up to a mile for his stakes debut in Churchill Downs's Listed Street Sense S. 14 days later, but redeemed himself in a sloppy Kentucky Jockey Club S. a month later, with Tiz The Law (Constitution), one of the early Kentucky Derby favourites, back in third. The $50,000 yearling turned $190,000 2-year-old was a disappointing fourth, beaten 7 1/2 lengths, in the Listed Smarty Jones S. at Oaklawn on Jan. 24, but saved ground all the way in the 1 1/16-mile Southwest, split horses at the quarter pole and kicked clear to win by a length.

Declaration Of War has provided 19 stakes winners in the Northern Hemisphere (25 in total), outpointing both Violence (14) and Take Charge Indy (12) in his sire crop. Were he still standing in the U.S., he would appear third behind those two among his sire crop by earnings with $11.9-million in the bank. He has 14 graded winners (five of those Grade I winners) and three Classic winners in two countries. In other words, Declaration Of War is a solid, proven middle-market stallion that slipped through the cracks in the American sire ranks.

Unfortunately for the breeders and pinhookers of those 2019 yearlings, Declaration Of War's hot streak kicked off just a touch too late for them to have had the chance to benefit from it. Third-crop son Valdermoro (Ire) came on the scene midway through the yearling season, winning the G3 Acomb S. in August, and by the end of the year Declaration Of War had added three more juvenile graded winners: GI Summer S. winner Decorated Invader, Silver Prospector and GIII Bourbon S. winner Peace Achieved. Those were in addition to the likes of Aidan O'Brien's Actress (Ire), a Group 3 winner at two and three, and Opry, a Grade III winner at two in 2018.

If Declaration Of War's supporters in the U.S. thought they were hard done by, they need only look at the plight of those who sent mares to him Down Under. Declaration Of War shuttled to Coolmore Australia for two seasons, covering 125 and 88 mares at A$27,500 and A$24,750. His first-crop yearlings averaged A$46,447, and his second crop A$47,568.

And if he has heated up in the U.S., Declaration Of War is positively on fire in Australia. After wins earlier in the year by Winning Ways (Aus) in the G1 Queensland Oaks and Declarationofheart (Aus) in the G3 Chairman's S., Warning (Aus) took the Victoria Derby on Nov. 2, three days before Vow and Declare (Aus) won the Melbourne Cup. And the power brokers Down Under have taken notice: It was announced on Thursday that Aquis Farm has purchased the aforementioned Olmedo to continue racing in Australia before entering stud there.

Declaration Of War is currently serving his second season at the JBBA's Shizunai Stallion Station in Hokkaido alongside the likes of Animal Kingdom, Cape Blanco (Ire), Makfi (GB), Bago (Fr), Johannesburg, GI Belmont S. winner Creator and Eskendereya, sire of last year's American champion sprinter Mitole. At ¥2.3-million, he is the most expensive stallion on the roster and covered 152 mares last year.

What's more, another Classic contender could yet spring from his current crop of 3-year-olds. Shimokobe Farm purchased the Tapit mare Jealous Cat for $210,000 at Keeneland November in 2015 and bred her to Declaration Of War at Ashford the following season before sending her to Japan. The result is Dieu Du Vin (Jpn), unbeaten in his first two starts including the Nov. 23 Cattleya Sho, the first of Japan's four Kentucky Derby qualifying races. Dieu Du Vin lines up in the third of those, the Hyacinth S., at Tokyo on Sunday.

Could two Declaration Of War colts out of Tapit mares wind up in the 20-horse starting gate at Churchill Downs on the first Saturday in May? The owners of the 110 mares that visited the horse in his final season in Kentucky in 2018 for $25,000 will sure be hoping so.