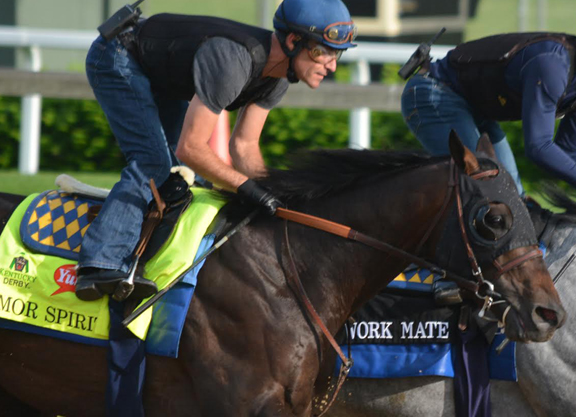 Michael Petersen's Mor Spirit (Eskendereya) posted his final workout ahead of Saturday's GI Kentucky Derby at Churchill Downs Monday morning, breezing five furlongs in :59.80 under Hall of Fame pilot Gary Stevens. The Bob Baffert trainee was timed in eighth-mile splits of :12.40, :23.60, :35.40 and :46.80 en-route to a six-furlong gallop-out in 1:13.20.

“It was a cruising half mile,” Stevens said. “He gave me everything I wanted. Bob wanted an easy half mile in 49 and I let him gallop out an easy five-eighths. He wanted to do more than I let him. He's getting over the surface well. He's always been a good mover. No wasted action. He does seem to be handling this surface better than Santa Anita's.”

Baffert echoed Stevens' feelings about the workout, noting that the hulking dark bay remained much more settled in the early stages of the work when compared to last week's five-furlong drill. Even so, the Hall of Fame trainer said that his colt has many obstacles to overcome.

“In his last work, he broke off a little too fast, but today he went really nice,” Baffert said. “It looks like he was moving really well. Now, we just need a good draw and a good break. So many things can happen. The break can make you or destroy you. The last work is important and then the last stressful thing is the draw, waiting to see what number you get.”

Favored in every start of his career, Mor Spirit finished second in Churchill's GII Kentucky Jockey Club S. and captured the GI Los Alamitos Futurity as a 2-year-old, and kicked off his sophomore season with a score in the GIII Robert B. Lewis S. at Santa Anita Feb. 6. The Pennsylvania-bred recently finished second in both the GII San Felipe S. Mar. 12 and the GI Santa Anita Derby Apr. 9. Although Mor Spirit has never faced Kentucky Derby favorite Nyquist in a head-to-head match-up, Baffert acknowledged that the undefeated colt is clearly the one to beat–a position Baffert was in last year with eventual Triple Crown winner American Pharoah (Pioneerof the Nile).

“I think we all have American Pharoah hangover,” Baffert observed. “Nyquist is a nice horse. I remember it being the same way with California Chrome and after he won people were like 'he is a really good horse.' Nyquist is fast and he keeps himself out of trouble. He definitely deserves to be the favorite because he's the most accomplished in the field.”