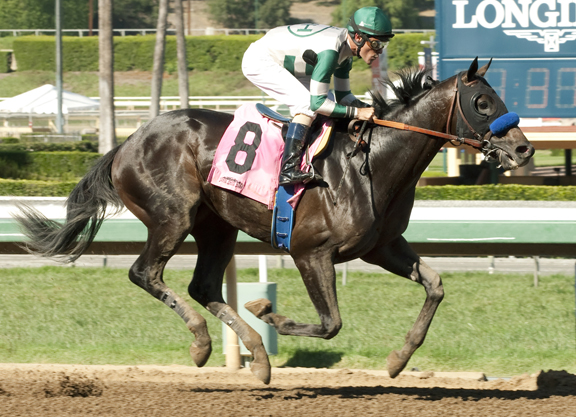 Michael Lund Petersen's GI Kentucky Derby hopeful Mor Spirit (Eskendereya) was eased before completing a workout Tuesday morning at Santa Anita Park, and Hall of Fame trainer Bob Baffert later confirmed via text message that the drill was terminated for precautionary reasons. The dark bay was pulled up in the stretch by Hall of Fame rider Gary Stevens after pursuing a stablemate, and subsequently jogged back to the barn.

“Mor Spirit is fine,” Baffert said. “He is very lazy and tricky to work. Martin Garcia was sick today. Gary filled in.”

Although Garcia is the Pennsylvania-bred's regular exercise rider, Mor Spirit has been ridden by Stevens in all three of his victories, including scores in the GI Los Alamitos Futurity Dec. 19 and the GIII Robert B. Lewis S. Feb. 6. Baffert offered that attempts to keep Mor Spirit calm rendered him overly lethargic, and the ridgling never got involved in the workout.

“We had his ear plugs in so he would not be that tough and it put him to sleep,” Baffert continued. “Gary aborted the work as a precaution.”

A second-out maiden winner in Arcadia in October, the $650,000 Fasig-Tipton Florida 2-year-old acquisition traveled to Kentucky and ran second in the GII Kentucky Jockey Club S. Nov. 28 before his two most recent stakes triumphs. Following his win in the Lewis, Mor Spirit returned to the worktab with a four-furlong move in :48.60 [21/49] Feb. 17. He is expected to make his next start in the GII San Felipe S. Mar. 12.   –@BMassamTDN