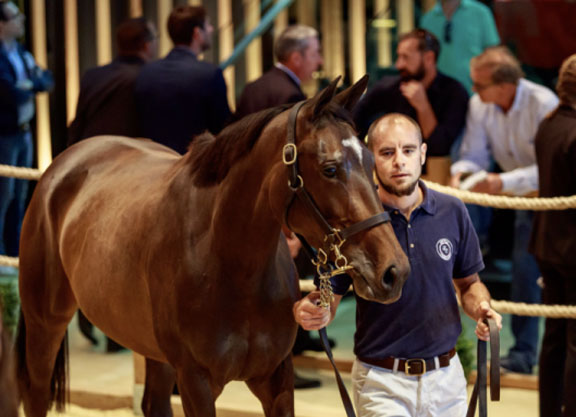 Floret (Ire) (Galileo {Ire}) (lot 210) was the standout of the Arqana Summer Sale catalogue, being a half-sister to the four-time Group 1-winning miler Moonlight Cloud (Ire) (Invincible Spirit {Ire}), and she fulfilled her potential in the ring when scooped up by Tony Nerses on behalf of Imad Al Sagar for €380,000 on Wednesday.

Offered by Charles Briere’s Fairway Consignment, the unraced 3-year-old filly is out of the stakes-placed Ventura (Ire) (Spectrum {Ire}), and she is also a full-sister to U.S. listed winner Cedar Mountain (Ire). The second dam, Wedding Bouquet (Kings Lake), won the G3 Park S. and the GIII Monrovia H. and was twice Group 1-placed at two, while under the third dam is the likes of the dual Derby winner Generous and his dual Classic-winning half-sister Imagine. Nerses said the filly would return to Blue Diamond Stud in the UK and a mating plan would be decided upon, while consignor Briere said, “she is a lovely filly, she arrived to Fairway only two months ago and adapted very well to her new life. She has a great page; you can’t get better for breeding, especially being a half-sister of Moonlight Cloud.”

Of the in-foal mares offered on the day, topping the table was The Channel Consignment’s Torentosa (Fr) (Oasis Dream {GB}) carrying to Zoustar (Aus) (lot 218). The 11-year-old, a half-sister to G1 Investec Derby winner Wings of Eagles (Fr) (Pour Moi {Ire}), was picked up by Tweenhills Farm for €140,000. It was Henri Bozo who signed the ticket on behalf of David Redvers, and he acknowledged Redvers’s faith in Zoustar, the standout Australian champion first-season sire who recently completed his first shuttle season at Tweenhills.

“I bought her for my friend David Redvers,” Bozo said. “He believes a lot in Zoustar and he wants to give him every chance possible, so she is going to Tweenhills.”

Redvers is also familiar with the female family via the mare’s 3-year-old half-sister Sparkle Roll (Fr) (Kingman {GB}); he bought her for €750,000 at Arqana August. She has won twice and was third in the G2 Ribblesdale S. at Royal Ascot last month.

The remainder of the leaderboard was dominated by horses in training, many of those jumpers or former flat horses bound for the fences. Signing as TJ Bloodstock, Tony Jones went to €210,000 for the 3-year-old colt Belsanndi (Fr) (Sinndar {Ire}) (lot 404) from the Aga Khan Studs. Jones indicated the horse would go to Ireland with a view to continuing on the flat before going over hurdles.