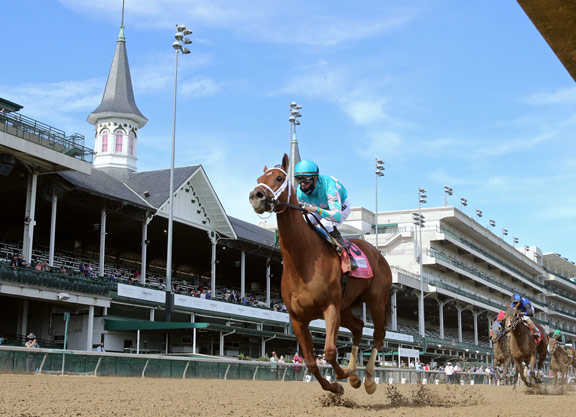 Two-time champion Monomoy Girl (Tapizar–Drumette, by Henny Hughes) has been retired from racing after she was discovered to have sustained an injury during training Tuesday at Churchill Downs, co-owner Spendthrift Farm announced Wednesday.

“Monomoy Girl went out for a routine gallop Tuesday morning and came back a little off in her right front leg. We had it x-rayed and found a non-displaced fracture of the sesamoid. Obviously, we're very disappointed,” said trainer Brad Cox. “She's walking sound today and it's not anything that will require surgery. It's just unfortunate that it will end her racing career.”

Purchased by Liz Crow for just $100,000 at Keeneland September, Monomoy Girl captured her first three races as a juvenile in 2017, including the Rags to Riches S., for an ownership group that included Michael Dubb, Sol Kumin's Monomoy Stables, Stuart Grant's The Elkstone Group and Bethlehem Stables. Runner-up in the GII Golden Rod S. that season, she returned to winning ways in 2018, capturing the GII Rachel Alexandra S. and GI Central Bank Ashland S. A facile winner of the GI Kentucky Oaks, the chestnut took both the GI Acorn S. and GI CCA Oaks and crossed the line first in the GI Cotillion S., but was disqualified for interference and placed second. She got the best of her older rivals in the GI Breeders' Cup Distaff that season, clinching her first Eclipse Award in the process.

Monomoy Girl missed the 2019 season due to colic and a hamstring injury, but returned victorious in 2020, capturing a Churchill optional claimer that May. Following suit with wins in Belmont's GII Ruffian S. and Churchill's GI La Troienne S., she ran to the money in the Distaff, defeating Valiance (Tapit) by 1 3/4 lengths, and earned her second Eclipse award.

Sent through the ring at Fasig-Tipton's Night of the Stars in November, Monomoy Girl summoned a whopping $9.5 million from Spendthrift Farm. My Racehorse joined in as a partner as did one of her original owners Sol Kumin, this time under his Madaket Stables banner. She was returned to Cox for her 6-year-old season, winning the GIII Bayakoa S. Feb. 28 and finished second to divisional leader Letruska (Super Saver) in the GI Apple Blossom H. when last seen Apr. 17. She was given a brief break from training following that event and had recently returned to Cox's barn. Monomoy Girl retires with a record of 17-14-3-0 and earnings of $4,776,818.

“I'm going to miss having her around and not being able to put a saddle on her again, but Monomoy Girl owes us nothing,” said Cox. “She's an unbelievable mare and will always hold a special place in my heart as our first Oaks winner, Breeders' Cup winner and champion. She will go to Spendthrift to start her breeding career and I'm sure she'll be an awesome mom.”

Spendthrift's Ned Toffey said that Monomoy Girl is expected to come to the Lexington-based farm this week to settle into her new career as a broodmare. Breeding plans have not yet been determined.

“Certainly, we are disappointed, especially for all of our partners,” said Toffey. “While we were hopeful to get her back to the races this year, we won't lose focus on what is most important and that is a healthy Monomoy Girl. She's an all-time great and we look forward to the next chapter of her career and giving her a great life on the farm at Spendthrift.”

Monomoy Girl's dam Drumette summoned $1.85 million from Bridlewood Farm in foal to Mastery at the 2018 FTKNOV sale. Her half-brother Mr. Monomoy (Palace Malice) captured a split division of the GII Risen Star S. last term and has since retired to stud in New York.