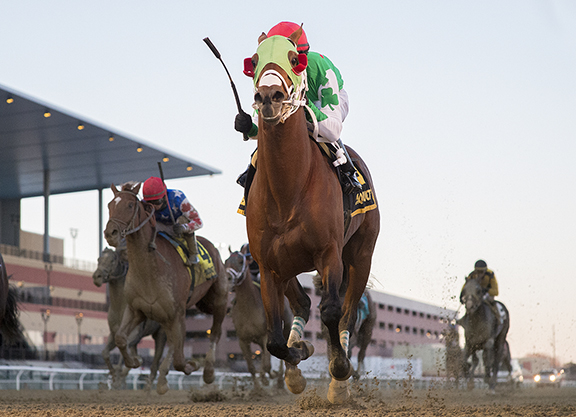 Mischevious Alex (Into Mischief) handled the added distance of Saturday's one-turn mile Gotham with aplomb, running away to his third straight impressive victory.

He broke sharply and raced three deep to vy for command as they stacked up four across the track through a :23.54 opening quarter. The bay made his move to gain a narrow advantage approaching the far turn, was sat down by Kendrick Carmouche nearing the quarter pole and responded nicely from there, driving clear in the stretch to deliver as the favorite.

“It was a great day for us,” winning trainer John Servis said. “He handled the next step up really well and gave us a solid effort today. We'll see how he comes out of this and Chuck [Zacney, Cash is King] and the other partners and I will discuss what's next. Ever since we put the blinkers on him, everything that we've handed him, he has handled very well.”

Mischevious Alex added to a banner day for leading sire Into Mischief. Two-time winner White Pants Night was purchased as a broodmare prospect by WinStar Farm for $100,000 at the 2014 KEENOV Sale. The 9-year-old mare is a half-sister to graded winner Hebbronville (Majesticperfection) and stakes winners Master of Disaster (Dance Master) and A Day for Dancing (Dance Master). She is also represented by the 2-year-old colt named Great Gasby (Tiznow) and a yearling colt by Outwork. She was bred to Wicked Strong for the 2020 season.

This story was posted in Top News and tagged Aqueduct, Cash is King, Gotham, Into Mischief, John Servis, Mischevious Alex.