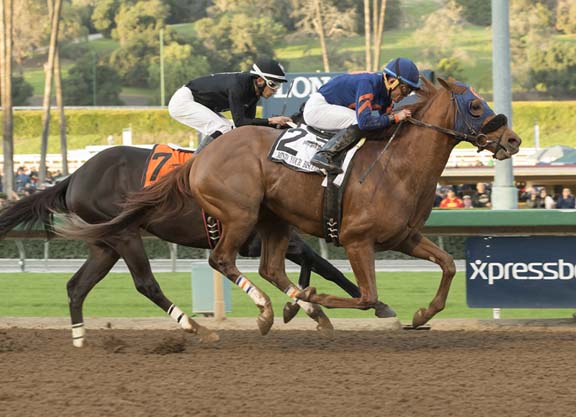 Given a 7-2 chance in Santa Anita's traditional holiday feature, Mind Your Biscuits stalked the pace in a closer-than-usual third through a :22.16 quarter. Sharp Azteca moved to take command midway on the turn and edged clear, but Mind Your Biscuits angled smoothly out of the pocket at the top of the lane and took dead aim on that rival. Drifting a bit at the eighth pole, he soon straightened out and reeled in Sharp Azteca in the final 70 yards.

“I was a little concerned in the stretch,” admitted winning jockey Joel Rosario. “We were closer than we have ever been before. They were smoking up front. We got a little late kick and he took off.”

“It's worth the trip,” Rosario said of the double. “Not a bad afternoon. It is always fun coming out here.”

Trainer Robert Falcone, Jr., earning the first Grade I victory of his career, was thrilled with the result.

“This is great for him,” said Falcone. “He bounced out of the Breeders' Cup great and he gets over the track so well. He just proved today, again, that he's a great horse. He's a real nice horse. It feels great.”

Mind Your Biscuits, who began the year with a 7 1/2-length maiden win against fellow New York-breds in April, faced open company for the first time in the July 30 GII Amsterdam S. and came away with a 1 3/4-length victory. Fifth behind Breeders' Cup Sprint winner Drefong (Gio Ponti) in the Aug. 27 GI King's Bishop S., he headed west after a runner-up effort in the Sept. 24 GIII Gallant Bob S. at Parx. He had been training forwardly since his third-place finish in the Breeders' Cup, turning in a bullet four-furlong work at Belmont Nov. 17 and returning to the west coast for a best-of-62 four-furlong drill in :47 1/5 at Santa Anita Dec. 18.

Mind Your Biscuits is out of the unraced Jazzmane (Toccet), a half-sister to Canadian champion 3-year-old filly Kimchi (Langfuhr). The 10-year-old mare, carrying a full-sibling to Mind Your Biscuits, sold to K.O.I.D. for $11,000 at the 2013 Keeneland November sale. Sent to Korea, she produced a Posse filly in 2014, a colt by Officer in 2015 and a colt by Tiz Wonderful this year.