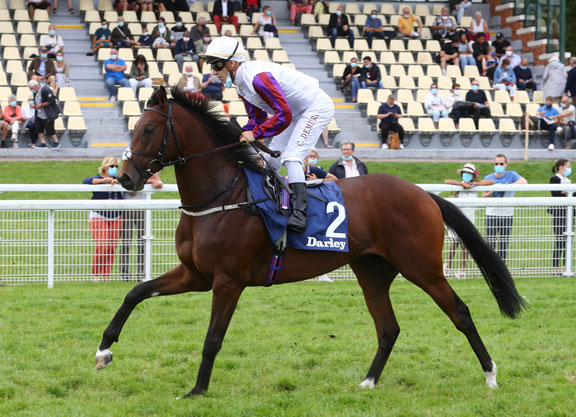 Newbury's G2 Dubai Duty Free Mill Reef S. has been won by the sprinting luminaries Harry Angel (Ire) (Dark Angel {Ire}) and Ribchester (Ire) (Iffraaj {GB}) in recent times and Saturday's renewal has some potential class acts lurking in the line-up for the six-furlong feature. Setting the standard is John Dance's Rhythm Master (Ire) (Dark Angel {Ire}) following his third placing in the G1 Prix Morny at Deauville on Aug. 23, but he has several unexposed rivals placing a target on him and will have to be every bit as good as he looked there to ward them off. They include King Power Racing's highly-regarded four-length Sept. 3 Newcastle novice scorer Fivethousandtoone (Ire) (Frankel {GB}) from the Andrew Balding stable having its finest year to date. He was beaten 3/4 of a length on debut by Bahrain Pride (GB) (Kodiac {GB}) at Windsor on Aug. 17 and that rival re-opposes having subsequently doubled his tally a fortnight later in the Listed Ripon Champion Two Yrs Old Trophy. Shaikh Nasser Al Khalifa's Line of Departure (Ire) (Mehmas {Ire}) beat the solid group performer Yazaman (Ire) (Kodiac {GB}) comfortably in Doncaster's Weatherbys Racing Bank £200,000 2-Y-O S. over 6 1/2 furlongs on Sept. 10 and could be open to further progress as a half-brother to Golden Horde (Ire) (Lethal Force {Ire}).

John Dance said, “We've been delighted with Rhythm Master and I'm very much looking forward to the race on Saturday. He was very green [at Deauville], particularly in the preliminaries. I don't think he could believe he could see thousands of people, as there was obviously no crowd at Haydock–it was very much like the first day at school for him. I think the soft ground was a bit of a shock as well, so for him to run as well as he did was very encouraging and also left the impression that there's hopefully more to come.”

Ed Crisford said of Bahrain Pride, “This has been the plan for him since Ripon. He's in great form and deserves a crack at a Group 2. It does look a very strong race, but our fellow has done nothing wrong, I think he's improving with racing and he deserves a crack at a higher grade now.” Andrew Balding has yet to win the race named after his father's great and commented, “Fivethousandtoone won well at Newcastle and took the step forward we hoped he would after finishing second at Windsor. He is a horse that I think a lot of, but this is a competitive race in a much tougher grade. He has looked very good at home and his work has been impressive. Hopefully he can step forward again.”

At Ayr, where the QTS Ayr Gold Cup takes precedence as one of the leading sprint handicaps of the season, the Listed Jordan Electrics Doonside Cup sees Sheikh Ahmed Al Maktoum's Addeybb (Ire) (Pivotal {GB}) enjoy a class drop following a break having last been seen finishing runner-up in the G1 Prince of Wales's S. at Royal Ascot on June 17. The Mar. 21 G1 Ranvet S. and Apr. 11 G1 Queen Elizabeth S. winner encounters another top-level performer in need of a confidence boost in last year's G1 Queen Anne S. hero Lord Glitters (Fr) (Whipper). Addeybb's rider Tom Marquand is keen to renew his partnership with the 6-year-old and said, “He's a cracking animal. Hopefully the ground doesn't dry out too much. He certainly looks in good order at home. It's probably a different path to Champions Day, but it's perfect for him. He should have his conditions. A mile and a quarter on a galloping track, that's what he wants. It was a well-spotted race by Willia [Haggas], perfect timing. Hopefully it will set him up nicely for the big day. He's got the penalty, but he's a dual Group 1 winner and hopefully he can overcome that.”