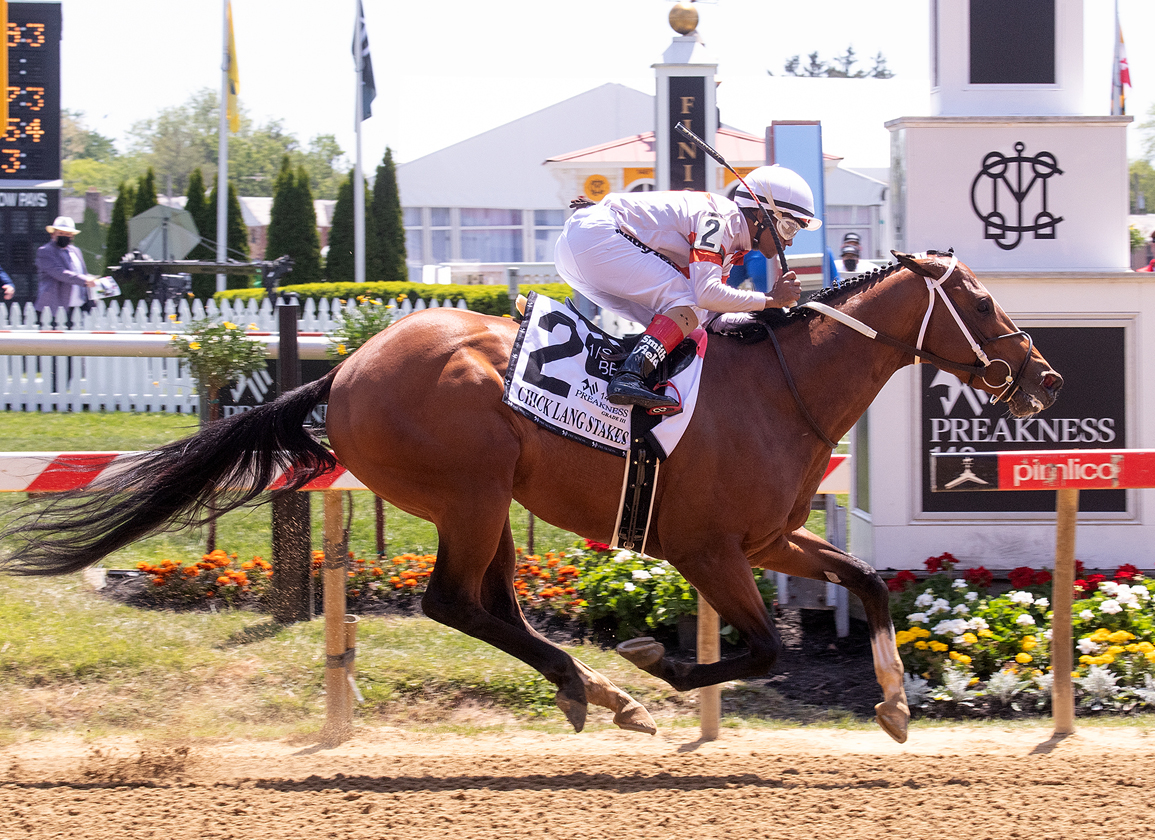 William and Corinne Heiligbrodt's Mighty Mischief came into the GIII Chick Lang S. riding a two-race win streak and added win number three while annexing his first at the graded level Saturday. Favored Jaxon Traveler broke fastest but it was Mighty Mischief who quickly hit the front, carving out a :23.16. Prompted by Willy Boi (Uncaptured) as Jaxon Traveler ranged up three-wide through a :45.97 half, the 9-5 second choice cornered in front and opened up a little cushion through early stretch. Given some right-handed encouragement by Ricardo Santana Jr. late, he strode clear a 1 1/4-length winner over Jaxon Traveler, recording the Steve Asmussen exacta. Hemp rounded out the trifecta.

“This is a nice horse,” said Santana Jr. “We have a lot of confidence in him. We've always loved this horse from Day 1. He's improved a lot. They let me walk the first quarter. I was really happy. He was really comfortable. The first quarter, when they let me walk in :23, I knew I was going slow. I knew he was going to accelerate for home, and I just waited for company to come back to me. And when they came close to me, I had a lot left.”

Added Asmussen, “The only thing that could have been better is a dead heat. I think they're both very quality horses. The race might have been a little quick back for Jaxon Traveler [winner of the Apr. 24 Bachelor S.]. He didn't have as much speed as he normally does, and the race got away from him a little bit from the half-mile to the three-eighths.”

Mighty Mischief kicked off with a runner-up finish going six panels in the Oaklawn mud Feb. 7 before going wire-to-wire next time over that track and trip Mar. 19. Favored for his latest while facing optional claiming company, he once again wired the field with ease.

Pedigree Notes:
Mighty Mischief gives his sire his 41st group/graded stakes winner and 96th black-type winner overall. The winner's dam was acquired for $230,000 with this colt in utero at Keeneland November 2017 and descends from a female family near and dear to the Heiligbrodts. Wealth Creation is a half-sister to GSP Random Walk (Super Saver) and is a daughter of Heiligbrodt homebred stakes winner Lunargal (Yes It's True), herself a half-sister to GSW & GISP Astrology (A.P. Indy), the couple's graded-stakes winning juvenile Lunarpal (Successful Appeal) and a full-sister to SW Lunarlady. Her latest live foal was produced this spring, a filly by Mitole, who won the 2019 GI Breeders' Cup Sprint en route to his Eclipse Award.