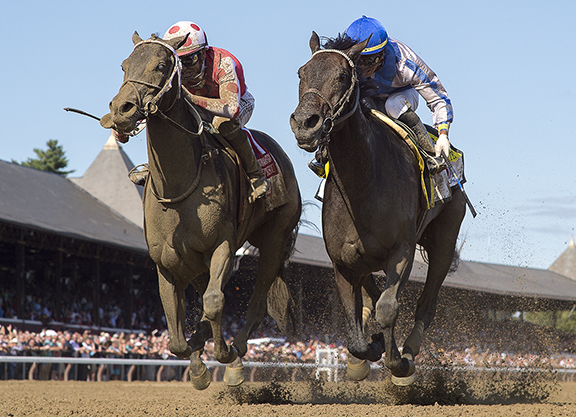 SARATOGA SPRINGS, N.Y.–Last year's renewal of the GI Personal Ensign S. was billed as a showdown between champion Abel Tasman (Quaity Road) and Elate (Medaglia d'Oro) and the fillies delivered with a memorable stretch throwdown. When the dust settled and a claim of foul was denied, it was Abel Tasman in the winner's circle, mirroring the year before in which she bested Elate in the GI CCA Oaks at the Spa after a stretch duel.

In this year's Personal Ensign, Elate was once again one of the headliners, but with Abel Tasman retired to the breeding shed, it was the sensational 4-year-old Midnight Bisou (Midnight Lute) who was billed as her chief rival. Elate was given the slight nod at 4-5 with Midnight Bisou, who is a perfect five-for-five this season, beating Elate on two of those occasions, the 8-5 second-choice.

Midnight Bisou exited her rail draw in good order, but sat back to caboose the sextet early as 37-1 shot Coach Rocks (Oxbow) clocked a first quarter in :23.46 with GISW She's Julie (Elusive Quality) tracking from second and Elate just off that one in third. Midnight Bisou began to creep up just a tad in the two path as the half went up in :47.88, but was still last entering the backstretch as GIII Shuvee H. winner Golden Award (Medaglia d'Oro) stopped suddenly and was eased by Tyler Gaffalione.

Elate took control with three-eighths left to run and appeared full of run while three wide turning for home. Midnight Bisou ranged up four wide on the far turn and set her sights on her elder rival in the lane, charging up after her under a head of steam. She drew even with Elate in the final sixteenth and the stage was set for the battle everyone was waiting for. The leading ladies did not disappoint, dueling stride-for-stride to the wire, each refusing to budge, but Midnight Bisou summoned all she had in the final stride, nosing out Elate in a photo that was too close to call. She's a Julie held third.

“Two great mares hooked up at Saratoga in a Grade I. A beautiful day, a beautiful setting, and two great mares,” said winning trainer Steve Asmussen, who also saddled GI Forego S. winner Mitole (Eskendereya). “The filly didn't run her best races here last summer and she came into this one in great form. And for her to win here at Saratoga against Elate in the Personal Ensign, at a mile-and-an-eighth…check marks.”

The Hall of Famer continued, “I have a ton of respect for the effort she gave today. We'll evaluate how she's doing. I do think she is the leader of the division.”

“The mare ran a tremendous race,” said Hall of Famer pilot Mike Smith. “It was a fight to get by Elate, who is a champion in her own right. With the extra four pounds there it took me a bit to get going, but once I got her going I was really happy that she handled the mile-and-an-eighth. I thought I got there at the wire, but there have been times before when I thought I did and didn't. You don't know the 'bob' exactly, but I felt like I got it anyway. I'm happy to know that I did.”

Bill Mott, trainer of Elate, said, “I mean she broke well, she was actually a little more in the race than I thought she would be. I liked our spot. She was getting a clear trip. The two speed horses that we figured would be in front of us were in front of us, but we weren't head and head with them. It gave us a good target. Midnight Bisou had to come over ground that we had already been over. I don't see any big excuse right now. It was a good race. One jump before the wire we were a head in front. Maybe we'll have to keep her in training another year and try again. But she ran great. Both the top two fillies ran great.”

He added, “You know what, I have to give Steve [Asmussen] credit. He brought his filly to the race in good order and she's been running good. We have no excuse.”

On Golden Award being eased, Mott said, “He [Tyler Gaffalione] said she felt okay. She went into the second turn and, I don't know. That was disappointing.”

Closing out a strong sophomore campaign with a third in the GI Breeders' Cup Distaff, Midnight Bisou has been unstoppable this year. Kicking off 2019 with a win in the GIII Houston Ladies Classic Jan. 27, the bay bested Elate by a length in the GII Azeri S. at Oaklawn Mar. 16 and was a neck ahead of Escape Clause (Going Commando) in the GI Apple Blossom S. Apr. 14 in Hot Springs, in which Elate finished third. Soundly defeating GI Ballerina S. victress Come Dancing (Malibu Moon) in Belmont's GI Ogden Phipps S. June 8, Midnight Bisou entered this test off a facile score in Monmouth Park's GIII Molly Pitcher S. July 20.

Midnight Bisou is one of three Grade I winners for two-time GI Breeders' Cup Sprint hero Midnight Lute. The winner's dam 2010 GIII Florida Oaks heroine Diva Delite (Repent) was purchased by Breeze Easy for $750,000 at last year's Fasig-Tipton November sale carrying a foal by the late Pioneerof the Nile. Diva Delite has a 2-year-old colt by Warrior's Reward, just a $1,500 purchase by Dalton Lawrence at this year's OBS April Sale, and a yearling filly by Wicked Strong. She dropped a Pioneerof the Nile filly May 1 and was bred back to Triple Crown hero Justify.