Home » Archive » Shared News » Midnight Bisou in the Classic? Why Not?

Midnight Bisou in the Classic? Why Not? 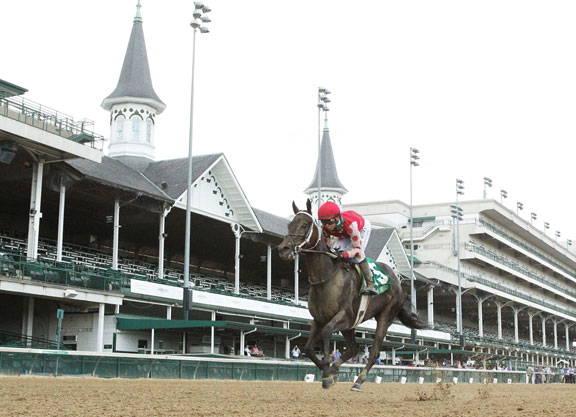 There was no word Sunday from the camp of Midnight Bisou (Midnight Lute) regarding where their mare would run next and what the long-term goals are for the season. But we know this much: Midnight Bisou is outstanding, her connections took on males once, in the Saudi Cup, and the GI Breeders' Cup Classic is a lot bigger deal than the GI Breeders' Cup Distaff. Does that add up to her starting in the Classic? Fans of this sport can only hope that it does.

Midnight Bisou destroyed her competition in last Saturday's GII Fleur de Lis S. at Churchill Downs, which was no easy assignment. She hadn't raced since the Feb. 29 Saudi Cup and was facing at least one horse who, on paper, looked like she might beat her. Serengeti Empress (Alternation) is at her very best when able to get loose on the lead and, as expected, that's the trip she got Saturday. But no filly was going to beat Midnight Bisou on this day. With Mike Smith never asking for her best, the champion won by 8 1/4 lengths.

One race later, perhaps the best older male in training, Tom's d'Etat (Smart Strike), was also an impressive winner, cruising to a 4 1/4-length win in the GII Stephen Foster S. He completed the mile and an eighth in 1:47.30 and got a 109 Beyer figure. Midnight Bisou ran the same distance in 1:48.99 and her Beyer number was a 93.

But that doesn't necessarily mean he is the better horse or had the better day. For Midnight Bisou to have run as fast as Tom's d'Etat, she would have to have won by about 16 1/2 lengths. With the race wrapped up when she made her ground-gobbling move on the far turn, there was no reason for Smith to ask for anything extra in the stretch.

Rather than worrying about who was better, maybe the right thing to do is to concede that both Midnight Bisou and Tom's d'Etat were very good and that there is no fair way to compare their races.

Midnight Bisou will be stabled at Saratoga. A start in the Aug. 1 GI Personal Ensign S. makes the most sense for her. But the bigger question is where will she run in the Breeders' Cup? The safe thing to do would be to run in the Distaff. The more adventurous, potentially more rewarding spot is the Classic. It's worth $7 million. The Distaff goes for $2 million. A filly that wins the Classic becomes an immortal. A filly that wins the Distaff may find it hard to stand out among the other 33 fillies or mares who have won the race. Unless Tiz the Law (Constitution) wins the Triple Crown, there will likely be a handful of Horse of the Year candidates racing on the Breeders' Cup card. A win by Midnight Bisou in the Classic might just put her over the top, giving her the Horse of the Year title she lost out on in 2019.

Here's another thing to consider: if Monomoy Girl (Tapizar), Swiss Skydiver (Daredevil) and Gamine (Into Mischief) run up to expectations throughout the year, might the Distaff be a tougher assignment than the Classic?

Whenever a top filly faces the boys, it turns a race into an event. It's good for the sport and something we don't see nearly enough. Bob Baffert has said there is an outside chance that Gamine goes in a traditional Triple Crown race. Let's hope that she does. Newspaperofrecord (Ire) (Lope de Vega {Ire}) was very impressive winning the GI Just a Game S. Saturday at Belmont. Afterward, trainer Chad Brown said races against males could be on her schedule. That's terrific news.

Jeff Bloom of Bloom Racing has plenty of time to make up his mind. But he shows every sign of being someone who is not afraid to aim high. He brought Midnight Bisou back when she was five and sent her halfway around the globe to compete against males in the Saudi Cup. My guess is she will run in the Classic. It would be great if I am right.

When Canterbury Park announced that it was going to offer a Pick 5 with a 10% takeout at this meet, no one knew what to expect or how horseplayers would react. The hope was that by offering the lowest takeout bet in the sport, Canterbury would lure gamblers that otherwise wouldn't have paid any attention to their simulcast.

Seven racing days into the meet, there's little doubt that customers will react to the pricing of bets. With a June 18 card canceled after three races, there have been seven days at the meet in which a Pick 5 was offered and the average handle on the bet is $95,261. That may not seem like a lot, but it is for a B-level track racing only on Tuesdays, Wednesdays and Thursdays.

Canterbury's experiment has been a success, but it was not a good sign that the three lowest Pick 5 pools of the meet all occurred last week, when the average pool fell to $78,825. That probably means there were a lot of curiosity seekers the first week and some have moved on.

Canterbury may not have the class and quality of Santa Anita, Belmont and Gulfstream, but gamblers need to support this bet. Why shouldn't it handle $300,000 or $400,000 a day? We spend a lot of time complaining about how high the takeout is. The best way to get the industry to change is to bet more on the lower takeout bets like Canterbury's Pick 5 and less on the ones that gouge you at 20% or more.

Firenze Fire Back In Winner's Circle for Breen

Firenze Fire (Poseidon's Warrior) threw in a dud in the June 6 GI Carter H., finishing fourth. That it was his first start for Kelly Breen after racing for Jason Servis was obviously notable. In March, Servis was indicted and charged with using performance-enhancing drugs on his horses. It was easy to conclude that Firenze Fire couldn't do as well for Breen as he did for Servis because he would be running without performance-enhancers for his new barn.

The story took another twist Saturday in the GII True North S. at Belmont. The old Firenze Fire was back. The 11-10 favorite, he won by 1 1/2 lengths.

It's hard to say why he ran so much better in the True North than he did in the Carter. But what is clear is that the majority of horses that had been trained by Jason Servis and Jorge Navarro that have run back have fared better than most expected. That doesn't mean that Servis and Navarro weren't doping their horses. But why are these horses running so well for “clean” programs? That's anyone's guess.

A Toast to Dean Martini

For no other reason than his name is so clever, it would be fun to see GIII Ohio Derby winner Dean Martini (Cairo Prince) win a few more big races. For now, though, the connections should enjoy a big win and pat themselves on the back for reading the tea leaves when it comes to the 3-year-old races.

Tom Amoss claimed Dean Martini for $50,000 out of a May 17 maiden claimer at Churchill. He came back to finish second in a June 12 allowance at Churchill. Not many trainers would have come back in 16 days, but Amoss realized the $500,000 Ohio Derby purse was there for the taking. Against the level of competition he faced, Dean Martini didn't even need to improve to win.

In this strangest of years, we went from having too few races for 3-year-olds to having too many. The second tier 3-year-old races all figure to come up weak and may be won by more Dean Martinis of the world.