Midnight Bisou Does it Again in Ogden Phipps 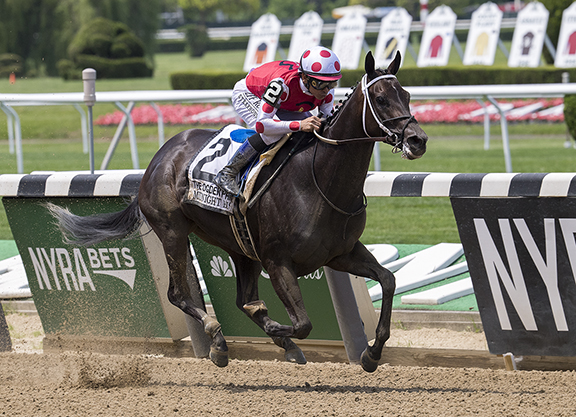 The popular dark bay, owned in partnership by Bloom Racing Stable, Madaket Stables and Allen Racing, exploded down the lane to post a breathtaking come-from-behind 3 1/2-length victory in Saturday's GI Ogden Phipps S., a 'Win and You're In' for the GI Breeders' Cup Distaff. Midnight Bisou is unbeaten in eight career attempts at 1 1/16 miles.

Come Dancing (Malibu Moon), favored at 4-5 off the heels of a pair of runaway wins in her last two, including the GIII Distaff H. with a gaudy 114 Beyer Speed Figure and the local GII Ruffian S. in the slop May 5, was second after setting the pace. It was another 3/4 of a length back to longshot Mopotism (Uncle Mo) in third.

“She makes you so proud,” winning trainer Steve Asmussen said. “She changes people's lives. She's just a special horse and I'm proud to be associated with her. I believe she's added to how great she is with consistency. She's expecting to win, and I think the results speak for themselves.

Asmussen continued, “She will go back to Churchill immediately after this. The amount of time we've had her there, she'll most likely have a breeze or two at Churchill before deciding on her next race.”

Midnight Bisou, off as the 8-5 second choice, tracked on the inside in fourth in the compact field of five as Come Dancing, who stumbled at the break, led comfortably through fractions of :23.39 and :45.96. Racing under confident handling by Mike Smith on the rail approaching the quarter pole, Midnight Bisou was tipped out to take on the pacesetter at the top of the lane, and, with a quick shake of the reins, turned on the jets in the stretch to win as much-the-best while stopping the timer in a very sharp final clocking.

“She just seems to be getting better with age, and she just loves it here at Belmont,” Smith said. “I don't know what it is, but Big Sandy seems to bring out the best in her. She broke good, in the bridle. And she stayed parked inside waiting for a chance to let it run. I thought the filly in front would be good enough to put some space between us, so I can get out when I wanted to, and that's what happened. She's a really nice filly.”