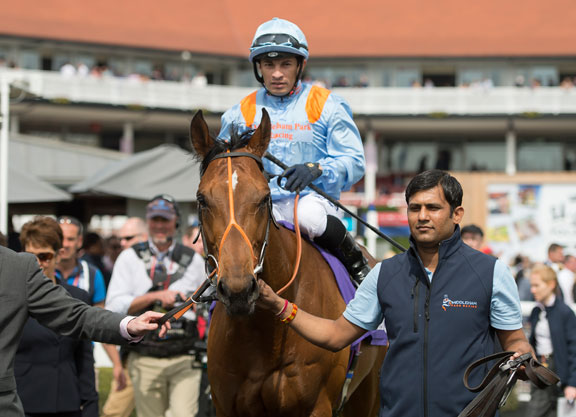 “It was a hobby that got out of a hand,” admits Middleham Park Racing founder Tim Palin with a grin as he recounts the tale of one of the great syndicate success stories in British racing.

The business that started 21 years ago with just two horses is now nearing 100 on its books, patronising trainers across the country, including Richard Hannon, Richard Fahey, Keith Dalgleish, David O’Meara, Ben Haslam and Nicky Henderson.

Bigger names have come in recent years, but the fact that Middleham Park Racing–named after the Yorkshire training centre where those first horses were based–has become such a thriving concern owes much to one of its initial pair in training, China Castle (GB) (Sayf El Arab), who held the record for the number of all-weather wins until being headed recently by Stand Guard (GB) and La Estrella (Ire).

“I had the odd share in horses here and there and then I decided I should set up my own syndicate as various friends were interested in getting involved. We started with Pat Haslam and China Castle was our first winner. He was a legend for us. He more than did his bit and won 25 times on the all-weather. My email address still includes China Castle to this day,” explains Palin, who has been joined in the business by his son, Tom. The Palins, along with Mike Prince, share the management of the different syndicates within Middleham Park Racing between them, each liaising with different trainers.

“We like to tinker with the horses’ plans and get involved with the trainers in the race planning,” Palin continues. “I manage some syndicates, Mike does some with Keith Dalgleish and David O’Meara and Tom does another group–he looks after the jumpers with Nicky Henderson. We all have our areas of responsibility. We like to have input but of course we can make mistakes sometimes.”

The mistakes are far from obvious. At the time of writing, the Middleham Park horses had won 24 races so far this year and a total of 781 over the last two decades. Palin says, “We started with two horses and somehow along the way it’s grown to 94 for this year. Nearly everyday I wake up and we’ve got a runner. So everyday you’re potentially looking forward to a winner. Any day we haven’t got a runner feels a little bit flat for me. I think to myself, ‘Oh, there’s no chance of a winner today, so no excuse to open a bottle of champagne at 8 o’clock tonight.'”

The champagne moments have, however, been plentiful. Top of the list of accolades must certainly be owning the champion 2-year-old in Europe in 2013, Toormore (Ire) (Arakan), a £36,000 purchase for the team by Peter and Ross Doyle at the DBS Premier Yearling Sale.

“As things have moved along I suppose our aspirations have grown, but I don’t think we ever thought we’d have a champion 2-year-old, which is what we ended up with in 2013. The extraordinary thing is that for all the good 2-year-olds the Hannon yard has had over the years, Toormore has been the only champion.”

Unbeaten at two, including in the G1 Goffs Vincent O’Brien National S., Toormore’s success brought with it the dilemma faced by so many owners of horses who show early promise, with a lucrative offer coming for him at the end of his juvenile season.

“There’s only one time to sell your horse and that’s when you don’t want to sell him,” says Palin. “We were offered a lot more for Toormore prior to the Guineas than we eventually got for him. It’s a constant battle and it’s an unfortunate thing for British racing, but it often comes down to us looking at the offer we’re made and then thinking about what we could potentially win with the horse, and often the offer outweighs that quite significantly.”

Middleham Park stuck with Toormore until the middle of his 4-year-old season, and he rewarded them with a win in the G3 Craven S. and runner-up finishes in the G1 Lockinge S. and G2 Lennox S. Since his sale to Godolphin in July 2015, the durable son of Arakan has won another three Group 2 races.

There have been many horses who have remained with the team and have brought plenty of big days out for their owners over a number of seasons. They include the enigmatic Junior (GB) (Singspiel {Ire}), who holds perhaps the unique distinction of having won at Royal Ascot on the flat and at the Cheltenham Festival over fences.

Pentitent (GB) (Kyllachy {GB}) has been another trouper for his connections. Bought as a 5-year-old from his breeder Cheveley Park Stud, the mud-loving gelding won the following year’s G2 Bet365 Mile and G2 Joel S. before adding two further listed wins and the G3 Timeform Jury S. to his tally as an 8-year-old.

The year after Toormore came Kool Kompany (Ire) (Jeremy), another DBS yearling purchase, this time at £40,000, who won a pair of Group 2 races in Ireland and France at two before also going on to win the Craven S. Unsold at £730,000 when offered at DBS in September in 2014, the colt has subsequently been sold privately to an Australian syndicate which includes some of Black Caviar (Aus)’s owners, and is in training in Sydney with Chris Waller.

Viren’s Army (Ire) (Twirling Candy) will be the next Middleham Park representative to take to the sales ring, with the G3 Dee S. winner, who holds entries for the G1 Irish Derby and G1 Coral-Eclipse S., set to be one of the stars of the Goffs London Sale on June 13.

Despite the decidedly commercial approach, Palin insists that many of the Middleham Park members prefer to see their horses race on. He says, “I don’t think our people are always in it for the finances. Yes, it’s great if you get a horse like Toormore or Kool Kompany and you sell them for 15 times what you’ve paid for them. Then there’s a financial uplift and it strengthens our business because that money gets reinvested in more horses. But our owners like to get involved with the horse and go to the open mornings at the yard, and that’s why we haven’t really spread our wings globally.”

With Highclere Thoroughbred Racing having recently set up syndicates to race horses in Australia, Palin and his team are happy to stick to what they know in their home country for now.

“Alex Elliott asked us recently if we’d have horses in America but the answer at the moment is I don’t know,” he says. “We’ve had the odd horse trained in Ireland but the vast majority of our owners are fairly down to earth middle-class people with a little bit of leisure time. They’re not all really wealthy people and they take 5% or 10% shares in horses. They like to go racing and they are fairly localised, and if they live in the north they probably want the horse trained by Richard Fahey or Ben Haslam, and some of our owners like to have horses in Newmarket or further south with Richard Hannon.”

Deciding not to cast the net wider has not harmed the popularity of Middleham Park Racing, which continues to attract more and more owners to its syndicates.

“The company is probably 50% bigger than it was five years ago, courtesy of horses like Toormore and Junior and Penitent. Now we spend a little more on yearlings–£50,000 would be our average spend now–and I think at that level it gives you a chance.”