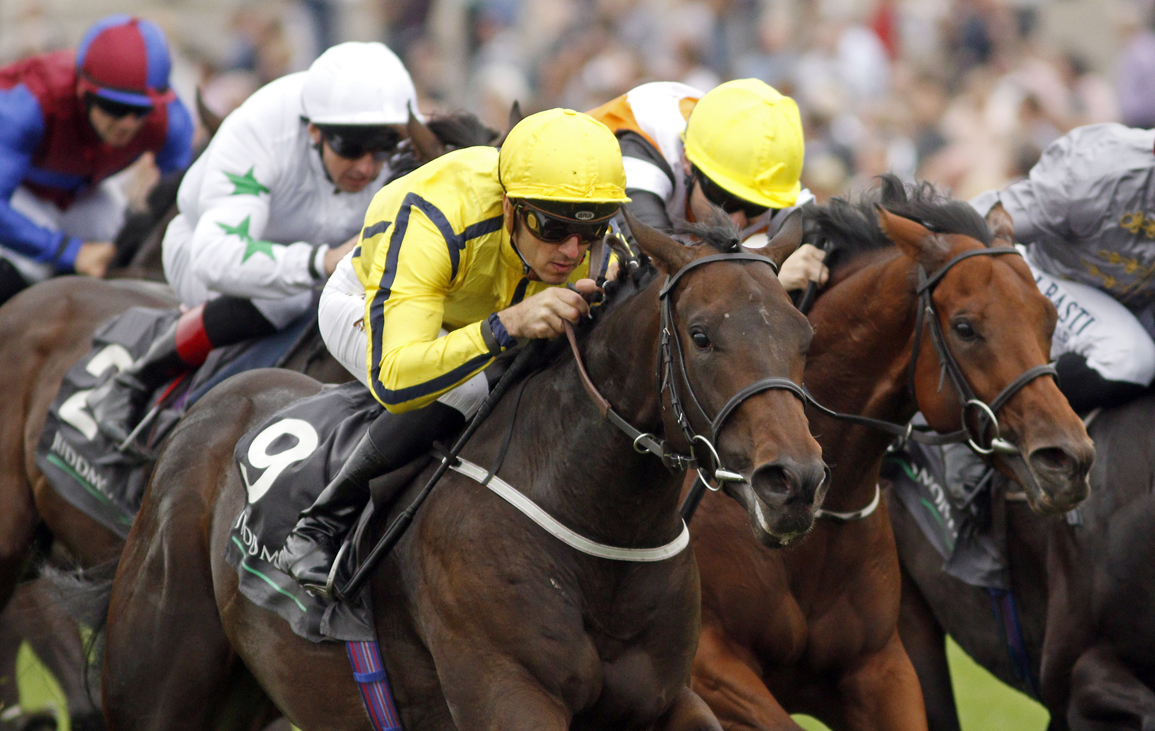 Saturday's G1 Juddmonte Middle Park S. at Newmarket looked a tight affair on paper and although there were just 1 3/4 lengths covering the first seven home, there was ultimately a degree of comfort in the victory of the G1 Prix Morny hero Perfect Power (Ire) (Ardad {Ire}). Freshened up since his success for Christophe Soumillon in the Morny over this six-furlong trip at Deauville Aug. 22, the Richard Fahey-trained bay was one of the last to play his hand under that rider but was a cosy half-length winner from Castle Star (Ire) (Starspangledbanner {Aus}) to complete the prestigious juvenile double. Positioned with only Castle Star behind as the early pace proved hot, Sheikh Rashid Dalmook Al Maktoum's 11-4 favourite was cajoled into action passing halfway and arrived widest of all to hit the front 100 yards from home. Strong to the line as he had been in Normandy and in the G2 Norfolk S., he had too many guns for Castle Star who denied Armor (GB) (No Nay Never) the runner's-up spot by a neck. “For a 2-year-old, he's very special. He's very easy and has a super mind,” Fahey said. “When he's not exercising he eats and then goes to sleep. With two furlongs to run I thought we were in a bit of trouble, but when he pulled him out he picked up very well.”

Introduced over five furlongs in a May 25 Newcastle novice, Perfect Power ran a respectable third before going to Hamilton to show his now-trademark acceleration eight days before the Norfolk. That was a tight turnaround to the Royal Ascot contest, but he was in no mood to back off and delivered his closing surge to overhaul Go Bears Go (Ire) (Kodi Bear {Ire}) there before heading to the Goodwood Festival. Tackling six furlongs for the first time in the July 29 G2 Richmond S., he enjoyed no luck in running when fifth behind Asymmetric (Ire) (Showcasing {GB}) but enjoyed a clear run at his rivals in the Morny to regain his mantle. This was close, but he has now overcome all that has been thrown at him when able to produce his late charge unhindered.

Soumillon also believes he was able to overcome difficulties with the undulations of this track and a perceived stand's rail bias. “My horse stumbled twice going downhill. I didn't lose confidence in him, but lost a little ground there,” he said. “When I took him out and he was running uphill, he found his gear and quickened like he did last time at Deauville. I was drawn one and in the race before we saw that the rail was beneficial. I was happy on Friday with my draw, because I knew if everyone was staying in the middle of the track it would be easy for me to come from the back but after 200 metres or so everyone was going to the fence and I knew it was going to be difficult to come from so far back. The pace was good, which was the key part of it. I'm sure he's much better on a flat track, but what he did today probably showed he's the best 2-year-old in Europe at the moment. I even think he can handle seven furlongs.”

Fahey had made clear his fears about the one draw for the £110,000 Goffs UK Breeze Up graduate. “I've been watching racing all week and when we got stall one I thought 'someone down there doesn't like me!'. I was very negative in my own mind, but he is a special horse,” he said. “The way he quickened up today–it took a special ride and a special special horse to win like that today. He's a ball of a horse who has had a busy enough time. When you go to Royal Ascot, then you go to Glorious Goodwood and then Deauville and then here it's tough, but he loves it. He could step up on pedigree. His sire was a fast 2-year-old and we don't know much about his progeny, but on the dam's side we've every chance of staying.”

Perfect Power, who has flown the flag for his first-season sire whose progeny have impressed in 2021, is the first foal out of Sagely (Ire) (Frozen Power {Ire}) who stayed 12 furlongs. She is a granddaughter of Saga D'Ouilly (Fr) (Linamix {Fr}), who is a full-sister to the Arc hero Sagamix (Fr) and a half to the G1 Criterium de Saint-Cloud-winning sire Sagacity (Fr) (Highest Honor {Fr}) and to Shastye (Ire) (Danehill). She needs no introduction as the dam of the high-class Galileo (Ire) trio of Japan (GB), Mogul (GB) and Secret Gesture (GB), while this is also the Aga Khan family of Sagamiyra (Fr) (Sea the Moon {Ger}) who took this year's G3 Prix du Pin and was second in the G1 Prix Rothschild. Sagely's yearling filly by Kodiac (GB) sells on Tuesday at Goffs Orby, while she also has a colt foal by Galileo Gold (GB).