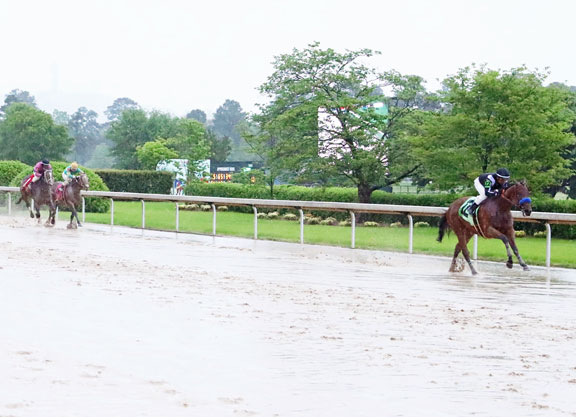 A hearing has been set for November 12 before the California Horse Racing Board’s Board of Stewards after a split sample confirmed a positive result for the presence of Dextrorphan, a cough suppressant, in the sample from the Bob Baffert-trained Merneith (American Pharoah), who was second in the fourth race at Del Mar July 25, 2020.

“Unfortunately, it’s just another case of contamination,” Craig Robertson, Baffert’s attorney, told the TDN. “One of Bob’s grooms had COVID, and he was the groom who was handling Merneith. He was taking both DayQuil and NyQuil and that’s where you find Dextrorphan. it’s a cough suppressant. You would never give a cough suppressant to a horse. It’s another case of clear contamination, along with these others, and it’s just unfortunate that all of these have occurred within a relatively short time frame.

According to Wikipedia, Dextrorphan “is a psychoactive drug of the morphinan class which acts as an antitussive or cough suppressant and dissociative hallucinogen.” It is contained in DayQuil, NyQuil, Robitussin and other popular cough suppressants.

“A number of my staff were sick with COVID this summer, including Merneith’s groom,” Baffert said via email to the Paulick Report, which was the first to report the story. “I learned he had been taking over-the-counter cough syrups that contained Dextrorphan. This has been an issue in other states where contamination has lead to positive tests. That’s what happened here. This is clearly another case of contamination. Ultimately, this is my responsibility. It’s really embarrassing for the barn, but that’s what happened. #2020 sucks.”

The CHRB explained that the posting of this level of complaint was indicative of a new, more transparent policy.

“The California Horse Racing Board has expanded the posting of complaints on its website for alleged medication violations to include Class 4 and Class 5 violations,” said the CHRB in a press release. “The CHRB has been posting complaints for the more serious Class 1, 2, and 3 violations, which require disqualifications and forfeiture of purses. However, with the increased emphasis on all medication violations in horse racing, the CHRB has elected to add Class 4 and Class 5 complaints as well. The complaints stem from all drug testing, including alleged violations during racing, training, and from out-of-competition testing. To view complaints filed by the CHRB, go to the website (www.chrb.ca.gov) and click on the tab for Administrative Actions, then select Complaints from the drop-down menu.”

The CHRB cautioned that the posted rulings are not yet final.

“Be aware that complaints are filed for alleged violations prior to hearing. The cases have not been adjudicated at the time they are posted. Pursuant to a new statute, potential medication violations will be posted on the CHRB website beginning January 1, 2021, with the identification of all drug positives once the split sample is confirmed or even earlier if the licensee declines to request split-sample testing. Those positives will be posted before any complaints are issued.”