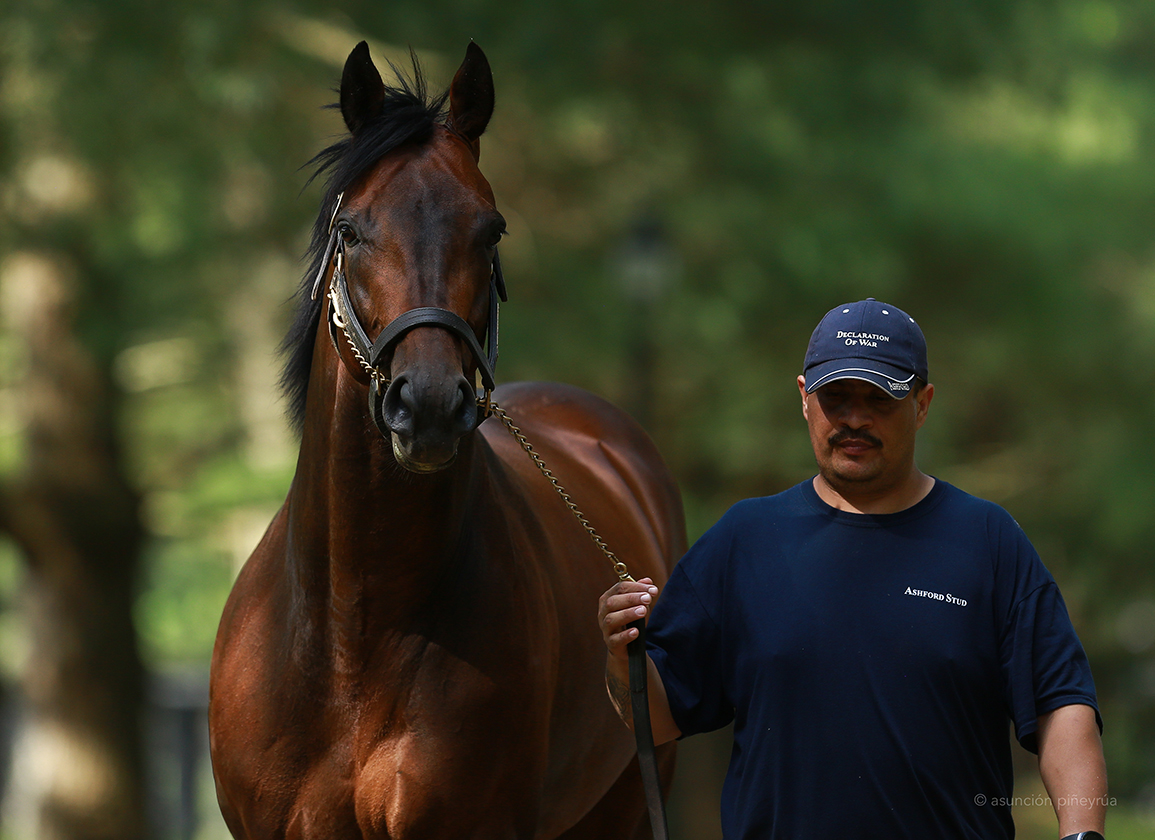 Read on for our visit with Adrian Wallace on champion and first-crop yearling sire Mendelssohn. | Coolmore

When regally-bred Grade I winner Mendelssohn (Scat Daddy-Leslie's Lady, by Tricky Creek) joined the stallion roster at Ashford Stud in 2019, his half-brother Into Mischief had just received a bump in stud fee from $100,000 to $150,000 at nearby Spendthrift Farm. The next year, as Mendelssohn's first foals were hitting the ground, Into Mischief was represented by GI Kentucky Derby hero and eventual Horse of the Year Authentic. Today, as Into Mischief is now widely regarded as the leading stallion in the world, Mendelssohn awaits the day when his first crop reaches the starting gate to find out if he can replicate the same extraordinary success as his older brother.

“I think there's no doubt that Into Mischief is the best stallion in the world now that Galileo (Ire) has unfortunately passed away,” Coolmore's Adrian Wallace said. “Every single Saturday he's represented across the country and around the world by graded stakes horses. It will be very fitting if his half-brother by the late, great Scat Daddy could be somewhat as good.”

The breeders strongly agreed with this hypothesis, sending close to 500 mares to the Grade I winner in his first two years at stud off a $35,000 stud fee.

“We're lucky at Ashford to have stood some very popular stallions, but none have ever been as popular as Mendelssohn,” Wallace explained. “He really captured the imagination. It was no surprise that everyone was after him given the fact that he's a brother to Beholder (Henny Hughes) and Into Mischief, given his physique and that he was able to transform that on the racetrack. He became a really, really hot commodity. If he were able to cover 400 mares a year, the demand would have been there.”

A $3 million yearling purchase, Mendelssohn had all the physical appeal to attract the Coolmore buying group at the Keeneland September Sale in 2016 as well as potential breeders a few years later.

“He's an absolute picture,” Wallace said. “He's one of the best-looking horses we've ever had and we've had the privilege to have had some beautiful horses here. But he also has great balance and a wonderful temperament. He was able to get on a plane seven different times to come to the U.S. and run with credit each time.”

Trained in Europe by Aidan O'Brien, Mendelssohn was runner-up to U.S. Navy Flag (War Front) in the G1 Darley Dewhurst S. before taking the GI Breeders' Cup Juvenile Turf. He returned as a sophomore with a win in the Patton S. at Dundalk in March followed by a track record-breaking score in the G2 UAE Derby.  Raced exclusively over the main track from then on, the bay placed third in the GIII Dwyer S., second to Catholic Boy (More Than Ready) in the GI Runhappy Travers S. and third in the GI Jockey Gold Cup S. before retiring with earnings of over $2.5 million.

“It's been a long time since we've had a Grade I winner on dirt in this country that was trained in Europe,” Wallace said. “I think Johannesburg was the last to do it in the Breeders' Cup Juvenile. Mendelssohn mixed with the best 3-year-olds of his generation, both in Europe and here. His most emblematic victory was in the UAE Derby when he won by 18 ½ lengths. He broke very, very well, went to the lead and pretty much galloped out in front of the TV.”

Wallace explained the trends he has seen in Mendelssohn's first few crops.

“They're very athletic, well-conformed horses,” he said. “They've got immense quality and they're very good movers. If you watch him walk, he moves like a cat. He's got a long, fluid walk and I think he's passing that on. They're generally very well-built, well put-together horses.”

The first crop from the son of Scat Daddy made a splash in the sales ring last year as weanlings, with 28 of 36 sold to average $82,589 and name their sire as one of the top three first-crop weanling sires.

Two colts brought $300,000 as weanlings. A son of MSW American Sugar (Harlan's Holiday) sold to Amerman Racing LLC at the Fasig-Tipton November Sale and a colt out of Abuntia (Olmodavor) went to Oxo Equine LLC at Keeneland November.

At the first major yearling sale this summer, the Fasig-Tipton July Sale, two Mendelssohn yearlings brought $185,000 and a third sold for $85,000.

“It's very early days, but the fact that two of his yearlings have gone through the sales ring already and sold for $185,000 a piece is a very good start,” Wallace said. “But there's a lot of  very nice ones to come, both in Saratoga and at Keeneland September.”

Mendelssohn will be represented by seven yearlings at the fast-approaching Fasig-Tipton Saratoga Select Sale, with an additional nine hips cataloged for the New York-bred sale the following week.

A colt out of the winning Grand Slam mare Tessie Flip will sell as Hip 6 at the select sale with the Paramount Sales consignment. The April-foaled bay is a closely-related brother to stakes winner and GIIISP Jo Jo Air (Scat Daddy) and his dam is a half-sister to two-time Grade I winner Switch (Quiet American).

“This colt has great balance, is very athletic and has a great walk,” Paramount's Gabriel Duignan said. “I think he's an extremely nice colt. What makes him stand apart from his older siblings is that they were also very good looking and very fast, but he's got more size, strength and scope I think. So he's a bigger model than they were, but has all the good qualitites that they do. He's an extremely fast-looking horse with a huge hip on him.”

Another Mendelssohn youngster heading to Saratoga is a filly out of SP Simply Confection (Candy Ride {Arg}). Selling as Hip 195, the Indian Creek-consigned yearling is from the family of GIIISP Inflexibility (Scat Daddy), champion Ashado (Saint Ballado) and GISW Sunriver (Saint Ballado).

“We've had the filly here on the farm and are very excited to take her up to the sale,” said Indian Creek's Sarah Sutherland. “She's a very elegant, strong, confident and intelligent filly and a beautiful mover. She's very efficient and covers the ground with no wasted action. She has handled the prep and everything coming in just as well as we could have hoped.”

Both Duignan and Sutherland spoke highly of the Mendelssohn progeny they have worked with already.

“I'm a huge fan of Mendelssohn and have been into him all along,” Duignan said. “I'm seeing the trend that a lot of the Mendelssohns I have [look like] the best the mare has thrown. He was an extremely good racehorse and we all know about his pedigree, which couldn't be better. So I think he's got a huge shot.”

“We had a couple clients breed to him last year and have several very nice weanlings on the ground,” Sutherland said. “They're predominantly out of turf mares and we're very excited about them. They have great size, natural scope and substance, and are all very correct, nice-moving horses.”

Of the five other Mendelssohn yearlings cataloged for the upcoming Saratoga Sale, the list includes a filly out of SP Auction (Ire) (Mr. Greeley), a son of GIIISW Dogwood Trail (Awesome of Course), a colt out of SP Ghost Flower (Ghostzapper), a filly hailing from the extended family of Grade/Group I winner and producer Chimes of Freedom (Private Account) and a filly out of SW Singing Kitty (Ministers Wild Cat). View the full pedigrees here.

“I think [the fact that] there are seven nominated to Fasig-Tipton's sale in Saratoga is indicative of the quality of mares he bred and the look they have,” Wallace said. “He covered a stellar book of mares in the last three years. A horse with his pedigree, look and race record deserves that support, so now the rest is up to them.”