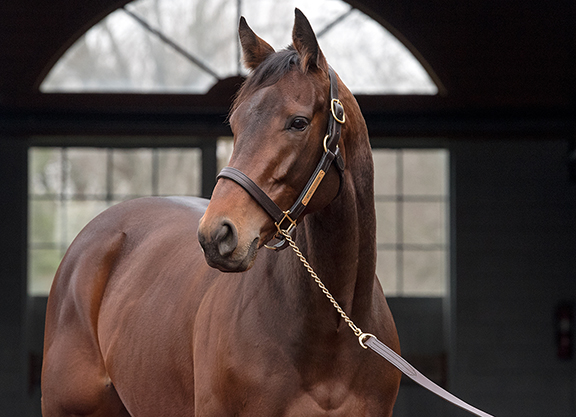 Mendelssohn (Scat Daddy) was a standout from the beginning, selling for $3 million at the 2016 Keeneland September Yearling Sale as a half-brother to Into Mischief (Harlan's Holiday) and Beholder (Henny Hughes). He delivered on the racetrack as well, winning the GI Breeders' Cup Juvenile Turf as well as the G2 UAE Derby. He stands his first season at Coolmore's Ashford Stud in 2019, and we caught up with Coolmore's Robyn Murray to talk about his initial book and how he's settling in.

TDN: Obviously, a big part of the reason why he was a $3-million yearling was his pedigree, but he's got the physical as well.

RM: He's one that the pedigree doesn't really need too much of an explanation. He's by Scat Daddy and a half-brother to the young, hot sire Into Mischief and four-time champion Beholder as well. Hence, it's an incredibly deep pedigree. He's also a gorgeous, gorgeous horse. He's a fantastic mover, with plenty of quality. He really is a fantastic individual. He's got incredible conformation and plenty of quality leg underneath him. He's a very scopey individual, and a beautiful, beautiful mover as well. All things that you want to see and the breeders that have been out to see him have absolutely loved him.

TDN: How is his initial book coming along?

RM: The demand that we've had from breeders has been absolutely phenomenal, and to the point where he's been fully booked now for a little while, so it's really exciting.

TDN: And being a son of Scat Daddy, a horse that you had here, I'm sure that helps with his demand.

RM: Yes, absolutely. Of course, Scat Daddy is much missed, not just here but all over the world. Also we have No Nay Never (in Ireland), who was champion first-season sire in Europe. Caravaggio, who has been very popular there, he's having his first foals this year and they now have Sioux Nation as well. Scat Daddy has been incredibly important for us and for so many people that wanted to breed to him before he passed, so it's great to have his sons.

TDN: How does his body of work on the track predispose him to doing well at stud?

RM: He was a very versatile horse, winning the Breeders' Cup Juvenile Turf, and then going down to Meydan and winning the UAE Derby by 18 1/2 lengths in a phenomenal performance. Then he came over and raced in the States with a second in the Travers, and a third in the Jockey Club Gold Cup. So he's proved himself on turf and then has been magnificent on dirt as well. I think that versatility has really appealed to the breeders. Obviously Scat Daddy was a very versatile sire himself, having the likes of Justify over the classic distances, and then the likes of Caravaggio, No Nay Never and Lady Aurelia.

TDN: How has he adapted to life on the farm?

RM: He came straight here after the Cigar Mile at Aqueduct, so he's been here about (six) weeks now. He's settled into life here fantastically. He's got a beautiful, beautiful temperament. They've test-bred him and all has gone well so far. He's starting to fill out a bit, put a bit of weight on. He's settled in fantastically.