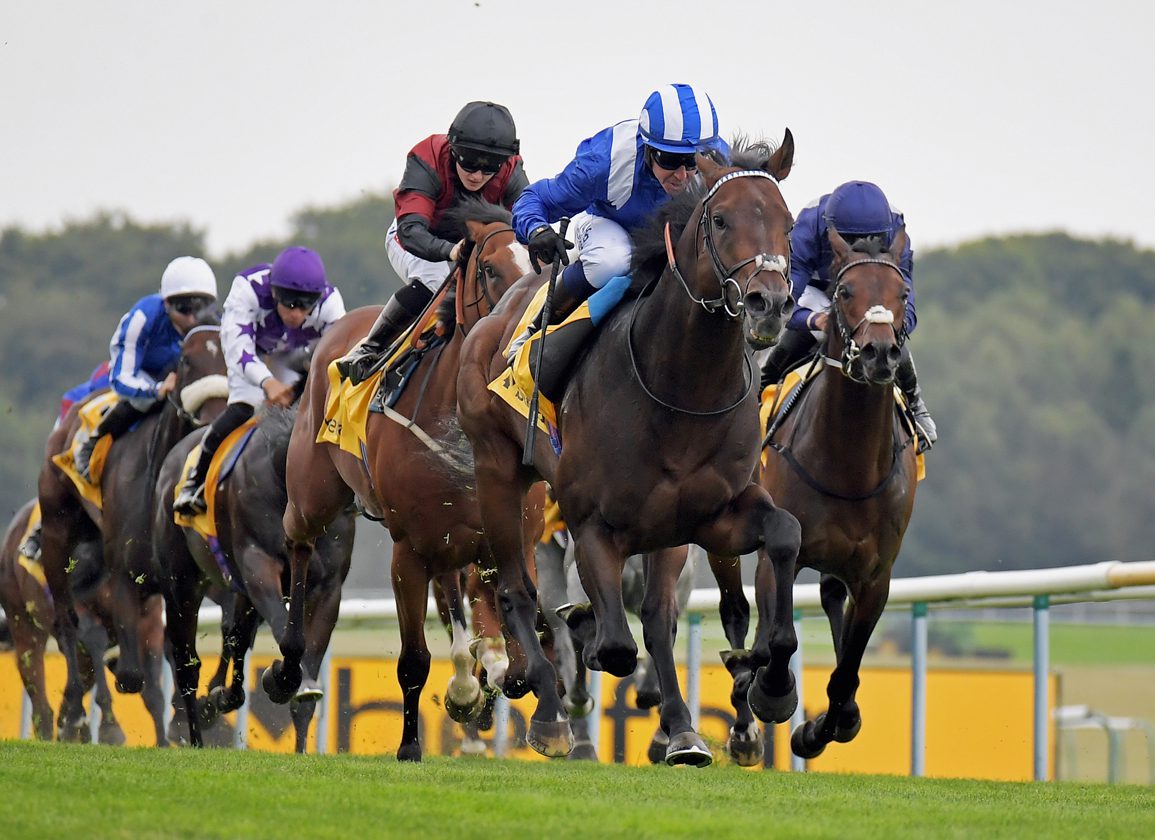 Haydock missed the rain on Friday night and Saturday and so the depleted line-up for the feature G1 Betfair Sprint Cup needed a stimulant. It got that and then some in the form of Minzaal (Ire) (Mehmas {Ire}), who came to the fore in scintillating fashion to become yet another in a long line of star sprinters operating in the Shadwell livery.

Looking ready for this career-defining moment when storming to success in Newbury's G3 Hackwood S. on a similarly fast surface over this six-furlong trip July 16, the 7-2 second favourite who had been second to Highfield Princess (Fr) (Night Of Thunder {Ire}) in Deauville's G1 Prix Maurice de Gheest in the interim Aug. 7, was visually full of running covered up in mid-pack by Jim Crowley. Let loose approaching the final furlong, the Owen Burrows-trained 4-year-old piled it on to romp to a 3 3/4-length verdict over last year's winner Emaraaty Ana (GB) (Shamardal), who denied Rohaan (Ire) (Mayson {GB}) by a short head.

“That was impressive, but it's not a surprise because we've always held him in high regard,” Crowley said. “He won the Gimcrack at two and then he went wrong after that. He is a remarkable horse because he is so laid-back. He is like a boxer–literally the bell goes and he wakes up then. He is a real dude.

“He has been a bit slow away in the past, which has probably cost him a couple of races, but today he jumped nicely and they went a nice pace. I was always travelling very comfortably and as I got the split he was away and gone. He is equally effective on good-to-soft as he is on fast ground and the main aim would now be Champions Day, so we will try and nick another one with him.”

Having won the G2 Gimcrack S. and finished third in Newmarket's G1 Middle Park S. as a 2-year-old, Minzaal was off the track until Ascot's Listed Rous S. over five furlongs in early October and his effort when second there proved he had lost little effectiveness during his downtime. Third in the G1 QIPCO British Champions Sprint S. a fortnight later, he went into winter quarters with the chance of a clean run through the 2022 season and on his comeback ran into what looks to be the clear sprint division leader in Highfield Princess when third to her in the May 11 G2 1895 Duke Of York S. Apparently averse to cheekpieces when only 13th in the G1 Platinum Jubilee S. at the Royal meeting June 18, he was back in the groove without headgear in the Hackwood and Maurice de Gheest to set up this career-best.

Tracking the right rivals up the centre of the track in Flaming Rib (Ire) (Ribchester {Ire}) and Emaraaty Ana, the bay took a few strides to really engage top gear when brought between them approaching the furlong pole but stretched out willingly from there to forge a large opening on top-class opponents. The 3-1 market-leader Naval Crown (GB) (Dubawi {Ire}) was disappointing as he beat only one of the 12 runners, with the five non-runners due to the fast ground including the leading contenders Kinross (GB) (Kingman {GB}) and Brad The Brief (GB) (Dutch Art {GB}).

Owen Burrows, whose record for Shadwell on big Saturdays is outstanding, was delighted his stable star had finally achieved what looked inevitable on that gloomy August day on York's Knavesmire two years ago. “He ran a big race in France last time and credit to Shaun his groom, who's been telling me that he's been in better form coming into this than he was for France and he was right. It was a big performance,” he said. “He's a pleasure to deal with, that's his one major attribute that he's got a temperament to die for as a sprinter. He's so laid-back about life, he just eats, sleeps and works and he's just lovely and a pleasure to train.”

“There was plenty of room so once he jumped and got a nice position behind the leaders–something which didn't quite materialise in France–I was happy and it's a massive performance,” he added. “I'm thrilled for him, he's been knocking on the door for some time and through no fault of his own he didn't get a chance last year to show what he can do and he's finally got to prove it. He'll go to Ascot next, all being well, Jim has been saying for most of the year that he'd appreciate a bit of juice but it didn't look that way just then!”

Emaraaty Ana's jockey Andrea Atzeni said, “He ran a blinder. It was very similar to last year in that he travelled beautifully through the race and when I let him down he really picked up for me, he just found one a bit too good on the day.”

Hollie Doyle said of Rohaan, “It was a great run and they went flat out, a lot quicker than at Newbury and I think that played into most of our strengths.”