Home » Archive » Europe » Meehan Back With A Spring In His Step

Meehan Back With A Spring In His Step 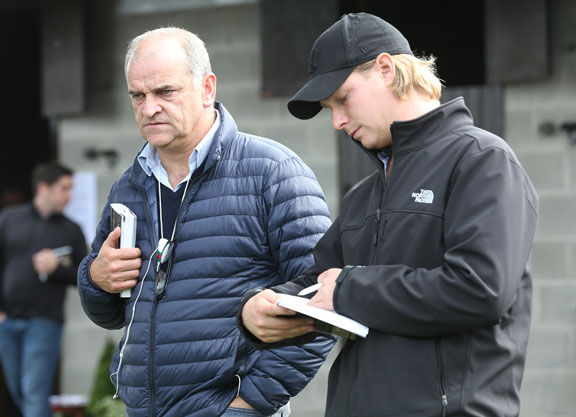 Spring is dragging its feet across the Wiltshire Downs. Yet again, morning has barely managed to prise apart rain clouds and grey hills, roiling together to every horizon. But if renewal remains uncertain in the season, it is there for all to see in the man bouncing his jeep across the mud and puddles alongside an all-weather gallop. Brian Meehan has been at Manton for 12 years but there is no mistaking the sense that things are getting a reboot round here. Last autumn he bought the stable he had previously been renting, and welcomed an ambitious new assistant in James Ferguson. Moreover his alliance with another young man of resonant pedigree, bloodstock agent Sam Sangster, had already produced dividends: only the second of their Manton Thoroughbreds partnerships came up with one of the top British juveniles of 2017 in G2 Richmond S. winner Barraquero (Ire) (Zebedee {GB}), picked out for just £30,000 at Goffs UK as a yearling. Following the retirement of Manton stalwart Jimmy Fortune, meanwhile, two of the top young riders on the circuit-Oisin Murphy and Tom Marquand-can now be found riding out here every week. Above all, however, Meehan himself exudes an air of reinvigoration. Recently remarried, he admits that personal vicissitudes had insinuated themselves into his professional morale; and, of course, that creates a vicious circle. Whether measured by quality or quantity, the decline had become transparent: down to just 26 domestic winners in 2016 from 73 in 2010. Crucially, however, Meehan has recognised both what was going wrong-and how he might set about turning things round.

“I wouldn't deny there was a time I was going out every morning and it was like, here we go again,” he admits. “If you've been doing it 25 years, and are going to be doing it another 25, you have to keep the excitement going for yourself. If you're not geed up by what you're doing every day, you have to take a long hard look at it. But now, with buying the yard and everything else we're doing to change things, it's like a switch has gone off. All of a sudden you can't sleep at night because you're so excited about getting up in the morning.” That new focus has been aptly condensed by the physical concentration of the string. Manton has notoriously proved a challenge to some of his profession's biggest names but Meehan, knowing the place so well now, has been able to rationalise his needs in tandem with a new neighbour in Martyn Meade, freshly arrived from Newmarket. After book-ending 2006 with international G1 splashes in the Dubai Duty Free and Breeders' Cup Turf, respectively through David Junior (Pleasant Tap) and Red Rocks (Ire) (Galileo {Ire}), the string of around 120 that had accompanied Meehan from Lambourn mushroomed to 198. But he then discovered quite how literal a stretch that entailed.

“When the breeze-up horses came back from Calder, we had horses in six different yards,” he says, shaking his head. “One morning I clocked 48 miles on the jeep. And probably that was the cause of a lot of it. The idea was that you had head lads or girls in each place, you had two assistants, all that kind of thing. But you had horses exercising in different areas, and trying to keep on top of it all was really hard-and, I think, drove me over the edge a little bit. That year we sent 25 to the July Sale, because it was ridiculous.”

Numbers first stabilised but then gradually subsided. Now that he has bought his own bricks and mortar, however, Meehan hopes to make a virtue of streamlining. Having originally been in a joint-venture, he couldn't consolidate in a particular area. His partners would have been entitled to ask why invest in more boxes for one yard, if you already have them available in another?

“In Lambourn, I ended up with 96 horses in a yard that historically took 50,” Meehan recalls. “But it was neat, it was tidy, it functioned. So that's what I want to do again. From 80 or so, the idea is to get back up to 100 heads over the doors.”

While he knows that fashion invariably favours fresh faces, in his 50th year Meehan stands at that ideal nexus of energy and experience. Here, after all, is a trainer with 15 Group or Grade 1 winners to his name, and a deserved reputation for enterprise in where he bought and raced good horses. His every corpuscle yearns to restore that standing; to win back those orders that would previously have found him, at this time of year, prospecting breeze-ups in Florida.

“We used to have 25, 30 horses here from the U.S. and it was like a nursery for them,” Meehan says. “If they were good enough, they could stay; if they weren't, they could go back: that's not knocking American racing, far from it, it's just there's so much more of it. We kept data on what we bought in Calder and it was quite phenomenal: 48 per cent Group 1 performers, either winners or placed. I know the system, and it was great for the consignors to be able to hang their hat on a regular European shopper: they know what you need, and want you to come back.

“I think we've shown we're able to send horses anywhere. Even two years ago, when we had the first European-trained winner in Qatar. But what I want more than anything is to win the Breeders' Cup Turf again. I'd forfeit everything else for that, professionally. To win three of those, with three different horses? There wouldn't be many above me.”

Just Aidan O'Brien, in fact; while he would be joining only Andre Fabre and Sir Michael Stoute if he could find a third individual Turf winner to follow Red Rocks (2006) and Dangerous Midge (Lion Heart) (2010). And nor does it seem too far-fetched an aspiration, given the collective spring in the step of the Manton team.

It reflects well on both, for instance, that Ferguson should have come here from an equivalent role with Charlie Appleby, one he was hardly able to retain once his father John ended his long tenure as Sheikh Mohammed's bloodstock adviser last summer. Given his upbringing-and his sire certainly stamps his stock, not just physically but in vitality and engagement-and the experience he has already gained, Ferguson's arrival enables him both to see a different set-up and, potentially, to make a genuine difference himself.

“James fully intends to train but felt he wanted to do a little more time, and get out of the circle I suppose,” Meehan says. “He's from a great racing family and, with his whole Godolphin connection, it was a compliment that he wanted to see it from my point of view. I like the fact that he doesn't just agree, that he has ideas. I've had some great assistants over the years but sometimes one just rolled on from the other, and the system stayed in place. So it's nice to have new things going on, and whoever comes after him will have the benefit of his freshness.”

Sangster is also bringing new impetus, while also preserving a pleasing link to the past through his own celebrated surname. (His late father Robert, of course, once owned the estate.) “Sam's very good with people and he's behind the whole Manton Thoroughbreds idea, which is working really well,” Meehan says. “What we've tried to do at the sales is work on stallions that have done the job but dropped off the fashion list. Zebedee (GB) (Invincible Spirit {Ire}) has worked out for us, and Helmet (Aus) (Exceed And Excel {Aus}) is another horse we're trying to operate with.”

Done the job, and fallen off the fashion list? Sounds familiar. With these young thrusters putting their shoulder to the wheel, however, Meehan even finds himself in the vanguard of social media-thanks to pupil assistant Jack Morland, with snappy videos posted online to preview stable runners. True, a small but untimely hold-up has seen Barraquero diverted from a Guineas trial in favour of sprinting. But while he will no longer reappear in the Greenham S. on April 21, Newbury that day remains very much on the agenda for Raheen House (Ire) (Sea The Stars {Ire}), a Group 3 winner last year and likely to appreciate the extra test in Cup races this year. “I think the John Porter is a sensible place to start, and we'll take it from there,” Meehan says. “Jamie Spencer couldn't ride in the St Leger but we had a conversation the other day and he wants to commit to the horse 100 per cent for the year.”

Meehan likes several 3-year-olds with little or no track experience as yet, while Petrus (Ire) (Zoffany {Ire}), who did run well in good company at the backend, is expected to prove much stronger this year. The juveniles are evidently shaping up well, too. And when he needs to get out of the bubble, his wife Jax brings an outside perspective: new to racing, she has a style consultancy and boutique (Jax Jeans) in Hungerford. One way or another, it is years since Meehan has embarked on a new campaign in such positive vein.

“We haven't got them onto the grass yet, it being so wet,” he says. “But you don't want to be pummelling it now because that beautiful July ground is what Manton's all about: nobody else has it. We want to get the winners back up, of course, but what you really want is for them to be nice horses-and I do think we may have that, this year.

“It gave me such pleasure, that era where we were having runners abroad all the time, and had the profile of a good international set-up. So I want to bring that back again. That gives you the get-up-and-go, to fight the battle. Reputation does count for a lot, and the way people see you. But primarily you've got to be happy. We've made changes and there are more to come: there are a few things in my head I want to do. So while we can't reinvent the wheel, we do have the experience, and the knowledge-and still have something fresh.”