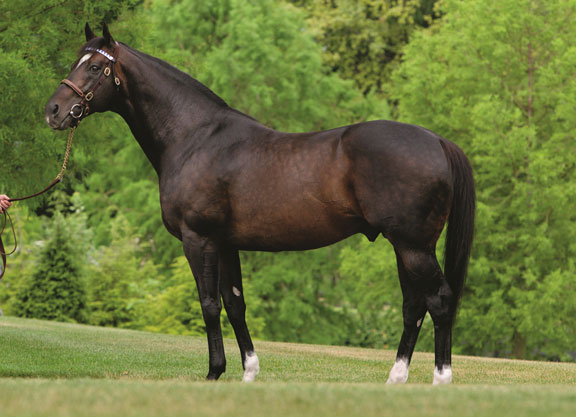 STRADIVARI (c, 2, Medaglia d'Oro–Bending Strings {MGSW & MGISP, $870,612}, by American Chance), a John D. Gunther homebred, captured his second career start in authoritative fashion in the opening race of the Gulfstream Park Championship Meet. A soundly beaten fourth behind Vorticity (Distorted Humor) in his seven-panel debut at Aqueduct Nov. 8, the dark bay was sent postward as the 9-5 second choice after drawing in off the also eligible list for this event rained off the lawn. Prominent from the outset, Stradivari tracked the pace as favored Giant Run (Giant's Causeway) showed the way through fractions of :24.15 and :48.51. Assuming full control as the leader tired on the turn, he pulled clear to a decisive 11 1/4-length score over longshot Geh Schnell (Silver Tree). The winner's dam, who captured four graded stakes events in four years of competition for this owner, is also responsible for the yearling colt Electric Avenue (Smart Strike) and an unnamed weanling colt by Speightstown. She was bred back to Tiznow this year. Sales History: $335,000 RNA Ylg '14 KEESEP. Lifetime Record: 2-1-0-0, $27,000. Click for the Equibase.com chart or VIDEO, sponsored by Fasig-Tipton.