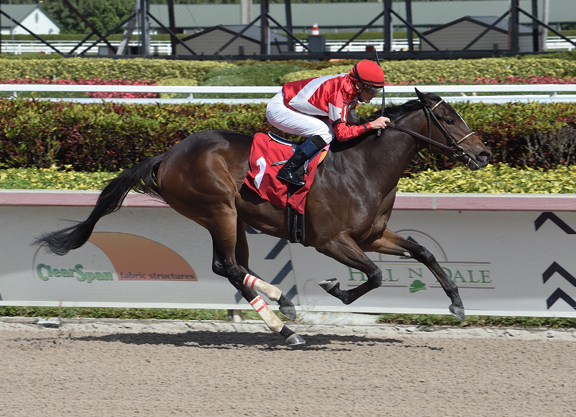 6th-Gulfstream, $43,000, Msw, 3-1, 3yo, f, 7f, 1:23.61, ft.
FOUR GRACES (f, 3, Majesticperfection–Ivory Empress {GSP, $189,402}, by Seeking the Gold), a half to ‘TDN Rising Star‘ and young sire McCraken (Ghostzapper), MGSW & GISP, $869,728, was let go at 7-1 for this first go for a trainer who is typically patient but can win with a talented firster on occasion–including McCraken and his and Four Graces’s now 4-year-old half-sister With Dignity (Declaration of War), who was also named a ‘Rising Star‘. Away well and ridden for speed from her rail draw, the dark bay emerged with a narrow advantage midway down the backside. She posted a :45.49 half with three foes chasing behind her, but left those runners in the dust in upper stretch. She struggled with her lead changes a bit as Estilo Talentoso (Maclean’s Music) looked like the potential beneficiary of the crowded early pace, but the leader found her footing and another gear in midstretch and kicked on to maintain a 1 1/2-length advantage at the line. Four Graces is also half to Bondurant (War Front), MGSP, $286,974 and 2-year-old colt Milliken (Into Mischief). His dam, a half to GISW Mea Domina (Dance Brightly), was bred back to Ghostzapper for 2020. Lifetime Record: 1-1-0-0, $25,800. Click for the Equibase.com chart or VIDEO, sponsored by Fasig-Tipton.
O-Whitham Thoroughbreds LLC; B-Whitham Thoroughbreds, LLC (KY); T-Ian R. Wilkes.