McCarthy in “a Nice Position” Ahead of Fall Blitz 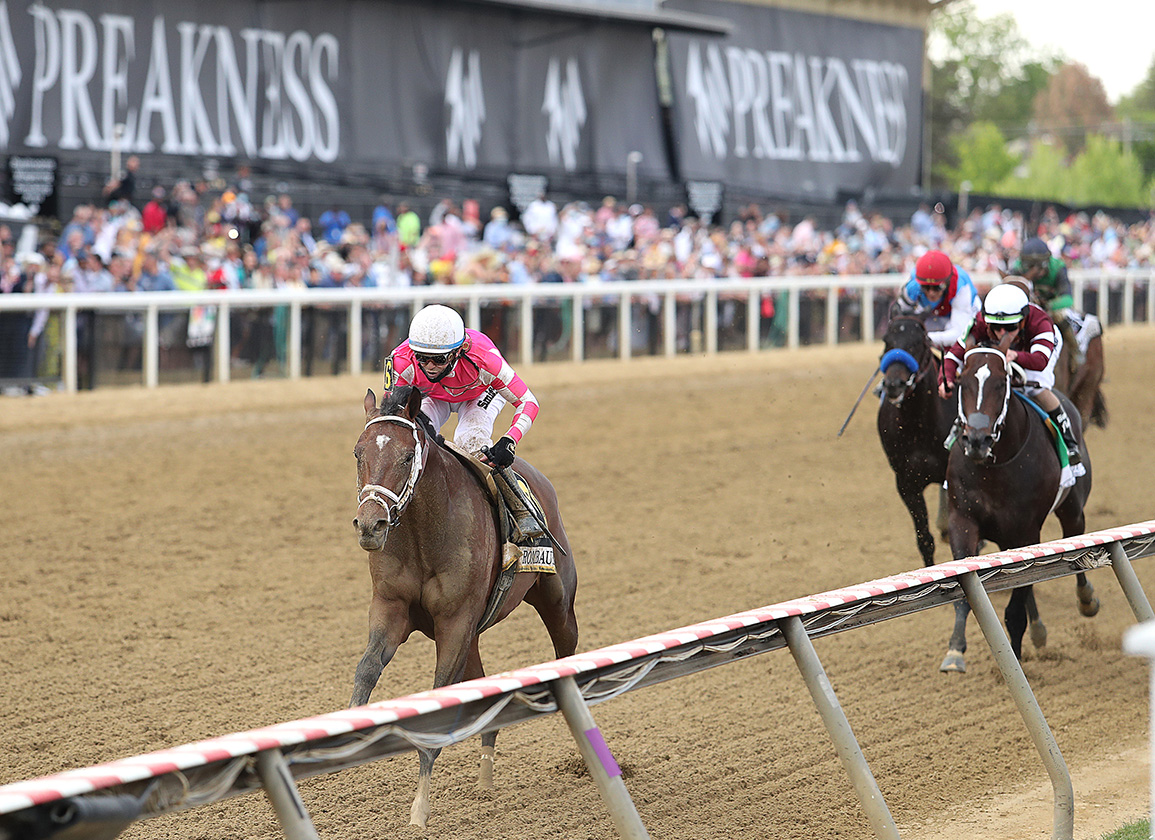 If any ducks have been careless enough to stray at the Michael McCarthy barn at Santa Anita, they've been promptly herded back into row.

The McCarthy office has a new lick of bright white paint and a navy accent wall to compliment the trainer's coat of arms. There's the fancy new desk–one of those good-for-the-back ergonomic types that moves to fit the owner and not the other way around–and a blazing new flatscreen high in one corner.

Then there's the trainer himself, freshly shorn from an in-office trim–a precision 10-minute procedure between paperwork one recent morning. In the McCarthy school of time-management, West Point would be made to look like Police Academy.

All in all, barn 59 at Santa Anita right now projects a sense of consolidation, not as a corrective but as an assurance the course already charted continues full steam ahead.

“I hope people look at me and see me extremely capable of being able to produce the results,” said McCarthy, when asked whether Rombauer (Twirling Candy)'s bounding GI Preakness S. win has brought, in the months since, any new dimensions to his career.

“Like I said on the day, it meant a lot to me personally–it was very validating,” he said. “The horse showcased what I believed he was the whole time. And it was wonderful that a small commercial operation like the Fradkins [owner-breeders Diane and John] were able to achieve something like that. That's one of the things that's so good about our game.”

Rombauer, Preakness winner-cum-fruity Napa Chardonnay, is currently nearing the end of a 90-day spa get-away at Peacefield Farm, a luxury all-inclusive in Temecula for pampered equines in need of a little me-time. Though Rombauer is hardly a delicate White Lotus.

“Eight different races at six different tracks,” said McCarthy, pointing to a resume that started with a win in a tidy maiden at Del Mar last July and culminated with a lionhearted third-place finish behind Essential Quality (Tapit) in the GI Belmont S. 11 months later.

Besides that, “We ran around like a chicken with its head cut off going here, there and everywhere,” said McCarthy, of Rombauer's spring itinerary which besides the Big Apple took in flights to San Francisco, Keeneland and Baltimore.

With all that in mind, it's good to hear that Rombauer's summer siesta sounds like he let his belt out a few notches and caught up on a bit of essential reading.

“He's just getting turned out, getting some R&R,” said McCarthy. “He's enjoyed his time off–put some weight on.”

With a return to training scheduled for the start of next month, McCarthy is understandably reticent about using indelible ink to mark Rombauer's 2022 racing calendar. That said, the road ahead is pretty well worn for a horse of Rombauer's peculiar gifts.

In the winter and spring, there are big pots in Florida and the Middle East, with McCarthy seemingly softer on the G1 Dubai World Cup than its Saudi precursor. At the same time, it would appear he's even softer on a domestic campaign, with the likes of the GI Santa Anita “Big Cap” H. an obvious early season target.

“It's always nice to be able to run out of your own stall,” he said. “He just didn't get the opportunity to do that much last year.”

Ultimately, though, “I'm looking at the entire year,” he said. “I'd like to culminate with a start in the GI Breeders' Cup Classic.”

It says a lot about the strength of McCarthy's relatively short training career–the current stint just eight years–that his standout performer to date probably isn't the winner of a Triple Crown middle leg.

“You always hope that they're as good as they are on the racetrack when they enter into the second stage of their careers,” said McCarthy, of City of Light (Quality Road), the four-time Grade I winner and now exciting young sire.

From his first crop, the McCarthy protege sired the highest-priced horses in two sessions at the freshly wrapped Keeneland September Yearling Sale, including the $1.7 million sale-topper and another colt that went for $1.05 million.

While McCarthy was the underbidder on the big-ticket maker, he made amends when signing $750,000 for a City of Light filly (hip 636) on behalf of the stallion's owners Mr. and Mrs. William K. Warren.

“He really does stamp them. Hopefully he'll pass along some of those traits that made him so good,” said McCarthy of City of Light, pointing to an “incredible amount of natural speed,” and a good mind that's “eager to please.” I saw a lot of him “in quite a few of them,” McCarthy added.

“You kind of just have to chuckle,” he said. “You look for them to get into the open market, and then it's awfully hard for you to get your hands on them. It can be a little bit frustrating. But they're going to the right people. That's the most important thing.”

In all, the recent Keeneland sales yielded a handful of new McCarthy-bound recruits, including a Bolt d'Oro colt (hip 713). When these fledglings take residence in Southern California, they'll join the ranks of more seasoned operatives besides just Rombauer.

“He's a strong horse–healthy horse,” said McCarthy of Smooth Like Strait (Midnight Lute), another McCarthy miler who, for two seasons, has shown himself a bruiser of a sparring partner whose vocabulary lacks not just the word quit, but all associated synonyms.

In May, he won a well-deserved Grade I at Santa Anita in the Shoemaker Mile S., and since then, has been denied a brace of Grade IIs by the toss of a baby's blanket.

Next up? The GII City of Hope Mile S. next Saturday. Beyond that, Smooth Like Strait will likely have another year to hold the nation's best to account.

“I don't think I've seen a horse in his class that's put together a resume like he has the last two years,” McCarthy added. “Multiple big days. Multiple big performances.”

The day after the City of Hope is the GIII Chillingsworth S., the intended next stop for Ce Ce (Elusive Quality), the dual Grade I- winner last year and GII Princess Rooney Invitational S. victor at Gulfstream Park in July.

All being well, the Chillingsworth will set her up for a start in the GI Breeders' Cup Filly and Mare Sprint, and a potential rematch against the Bob Baffert-trained Gamine, Ce Ce's recent nemesis in the GI Ballerina H. at Saratoga.

“It's out of my control. I can only worry about what's in front of me,” McCarthy said, of the Filly and Mare Sprint. “There'll also be 10 others.”

Next weekend looks like a busy one indeed for the barn.

In terms of Santa Anita's opening weekend, the likes of Friar's Road (Quality Road) and Chilean import Master Piece (Chi) (Mastercraftsman {Ire}) are nominated for the GII John Henry Turf Championship, Fast Jet Court (Brz) (Courtier) and Rideforthecause (Candy Ride {Arg}) are being aimed at the GI Rodeo Drive S., while Stellar Sound (Tapit) is a possible for the GII Zenyatta S., if she doesn't join Ce Ce in the Chillingsworth.

Over at Churchill Downs next Saturday, Independence Hall (Constitution) is being primed for the GIII Lukas Classic S., and Rushie (Liam's Map) for the GIII Ack Ack S.

McCarthy wouldn't have it any other way.

“It's a nice position to be in,” he said. “It's the sort of position you're always aiming to be in, getting to be in all the big ones.”